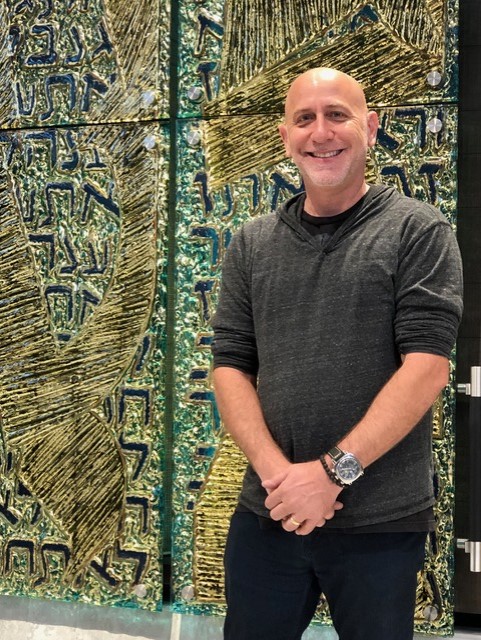 By Judith A. Saks

A change of careers brought Jim Holzer from California to Nashville, and he is loving it here. The new West End Synagogue executive director moved from the private business sector in Los Angeles, where he owned an advertising/marketing agency, to the nonprofit world where he said he “can work for the common good.”

During the pandemic, Holzer earned a master’s degree in accounting which serves him well in his new role. He said he finds there are “no bigger shoes to fill” than those of Marsha Stewart who retired after 16 years as executive director.

Holtzer found his job through Pam Kelner and the Jewish Family Service Jewish Business Network. “It was exactly the right thing I didn’t know I was looking for. It takes into account my business and accounting experience and puts it all in one place.”

“There are a lot of moving parts in the running of a synagogue,” he explained.“ My goal, here, is to make it simple.” He will be reviewing policies and procedures and getting the lay of the land. “I’m trying to make myself as available to everyone as I can so if they have a concern or suggestion, my door is always open.”

Steve Potash, West End Synagogue president, called Holzer “an energetic, savvy accountant who needs little time to figure out things. In addition, he is personable and making it very easy for people to get to know him. It is a pleasure to have Jim as part of the West End family.”

When he arrived this summer, Holzer faced the daunting task of making sure the newly reconstructed sanctuary was finished and ready for High Holiday services, a “trial by fire” that was accomplished. At the same time, the country was in the middle of a pandemic requiring special masking and distancing protocols. The in-person and virtual services went off without a hitch.

“This has been one of the most welcoming places, not just the synagogue, but Nashville,” he said. “My wife, Sherri, and I can’t imagine not living here, now. The day we moved in people started knocking on the door, bringing us brownies.”

One aspect of the Nashville Jewish community struck Holzer as unusual. “What I love about this community is how tight knit it is,” he noted. He said he never heard of a place where people are affiliates of multiple synagogues. One day Rabbi Saul Strosberg of Sherith Israel “just came through the door and introduced himself. That just never would have happened in Los Angeles.”

“I love the work, love the people and the environment,” he said. “For me, it’s the perfect job.”

Sherri and his mother-in-law Alice Samaris have already immersed themselves in synagogue activities. Sherri is teaching Sunday school and as a professional food strategist and health and nutrition coach, led a break-fast cooking class for congregants.

The couple, both California natives, met in college and have two adult children who live in New York City.

And yet another side to Holzer is displayed on his office wall, a photo of Joe DiMaggio. He loves baseball and was in the semi-pros in the early ‘90s. He also coached the Champions, a team of special needs kids, in Los Angeles.