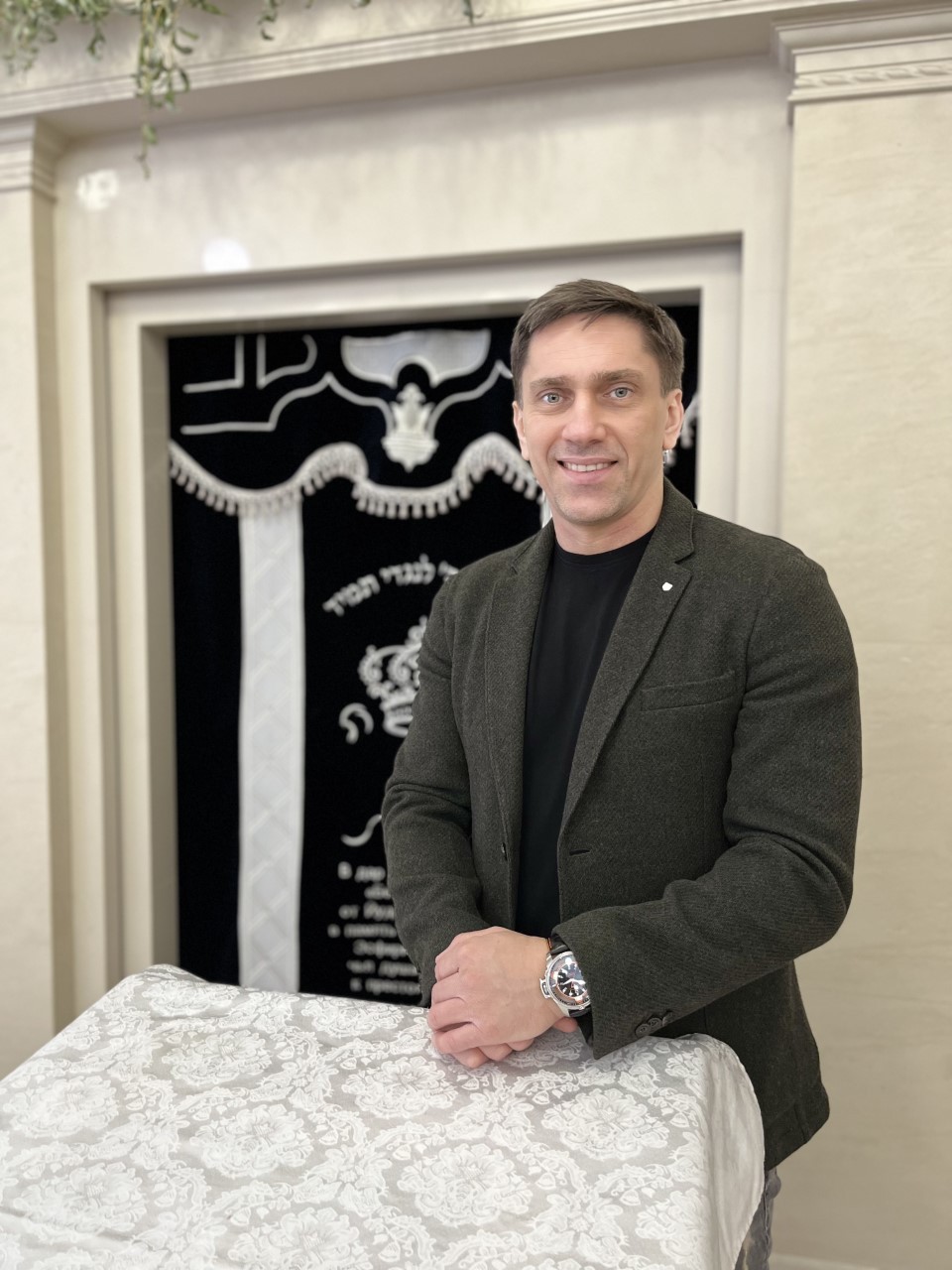 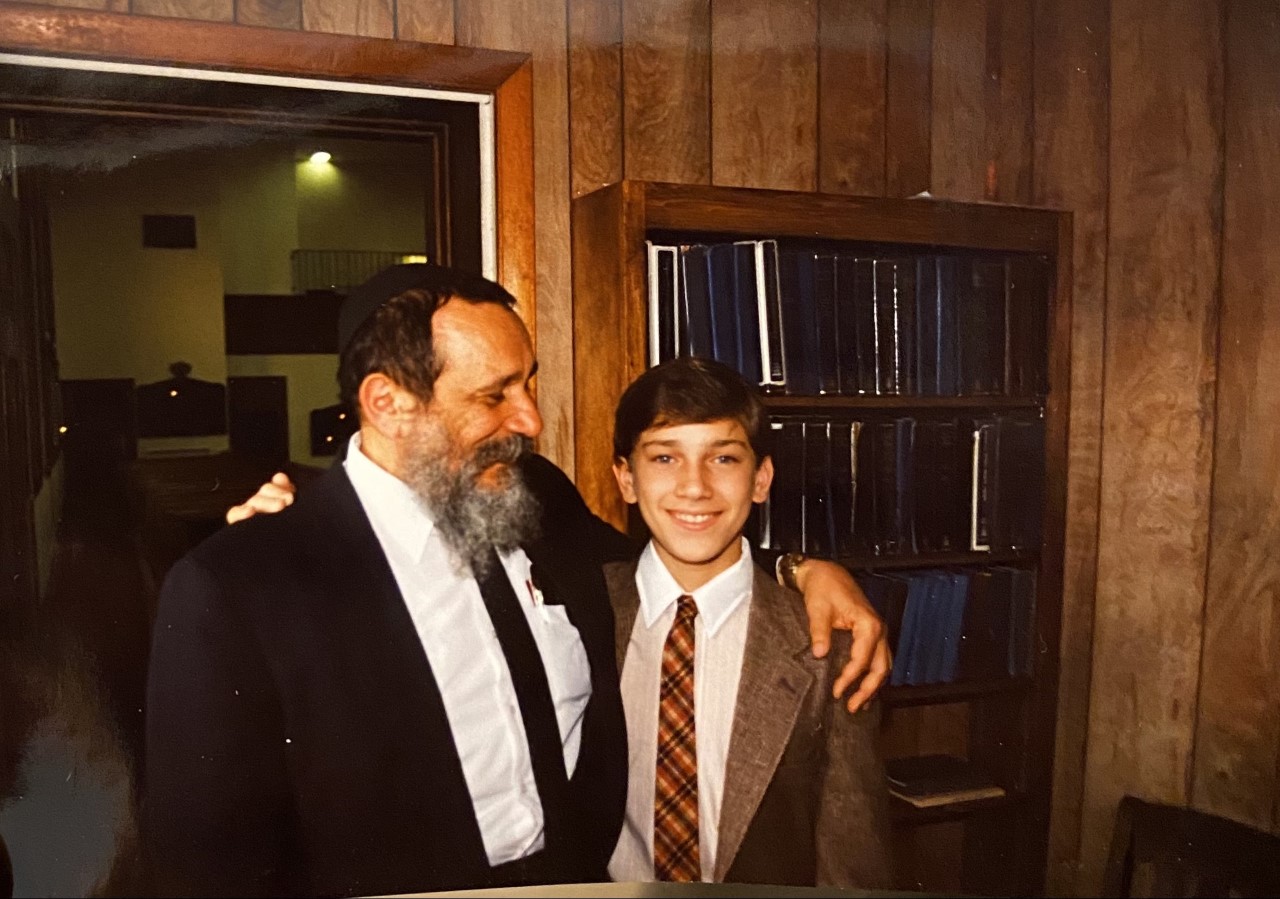 It was thirty years ago that an overwhelmed and exhausted 12-year-old Artur Livshyts arrived in Nashville from Minsk, Belarus, in the former Soviet Union. “I remember it like it was yesterday,” he says during a recent Zoom interview, “We took a night train to Moscow, then I flew to New York, then to Boston, and then to Nashville.” Livshyts spent two years in Nashville, living with relatives. He also celebrated his Bar Mitzvah a mere three months after his arrival, thanks to encouragement and coaching from a beloved mentor. His time in Nashville helped him develop a deep and lasting connection to Judaism and provide a direction in life he never would have imagined. 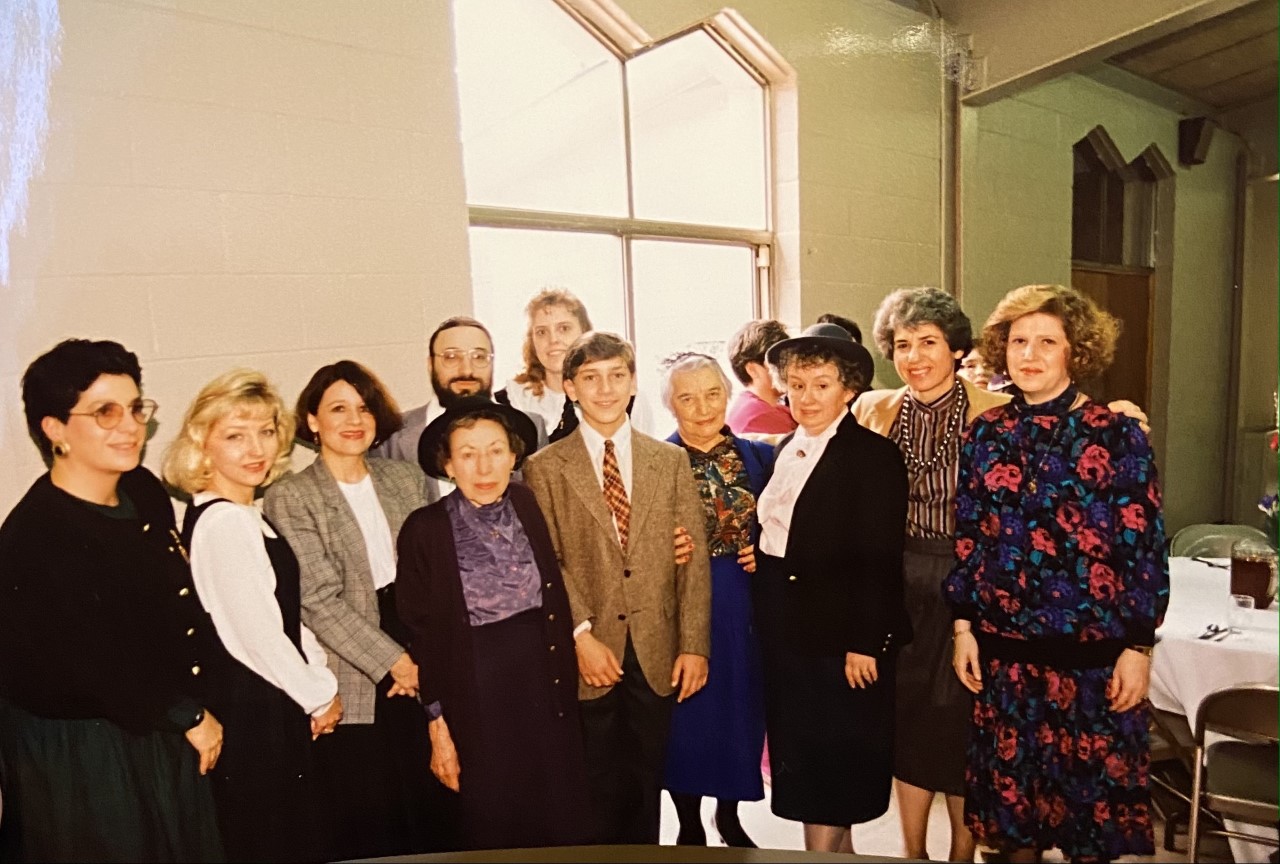 The plan to bring Livshyts to the United States originated with his grandfather, who had maintained contact with his Nashville cousin, Noah Liff. “They stayed in touch all during the Soviet period, which was really quite dangerous. But after perestroika, it became easier.” According to Jan Liff, Noah Liff’s daughter, her father visited the family in Minsk. “My father helped several people leave the former Soviet Union and settle in Israel, and the United States.” Livshyts says there were a couple of reasons his family wanted to send him to the United States. “The first was health. At that time, everyone considered children from Belarus and the former Soviet Union close to Chernobyl to be ill.” But there was also a much deeper reason his family wanted him to leave home. “The main reason was they wanted to infuse the Judaism back into my soul.” 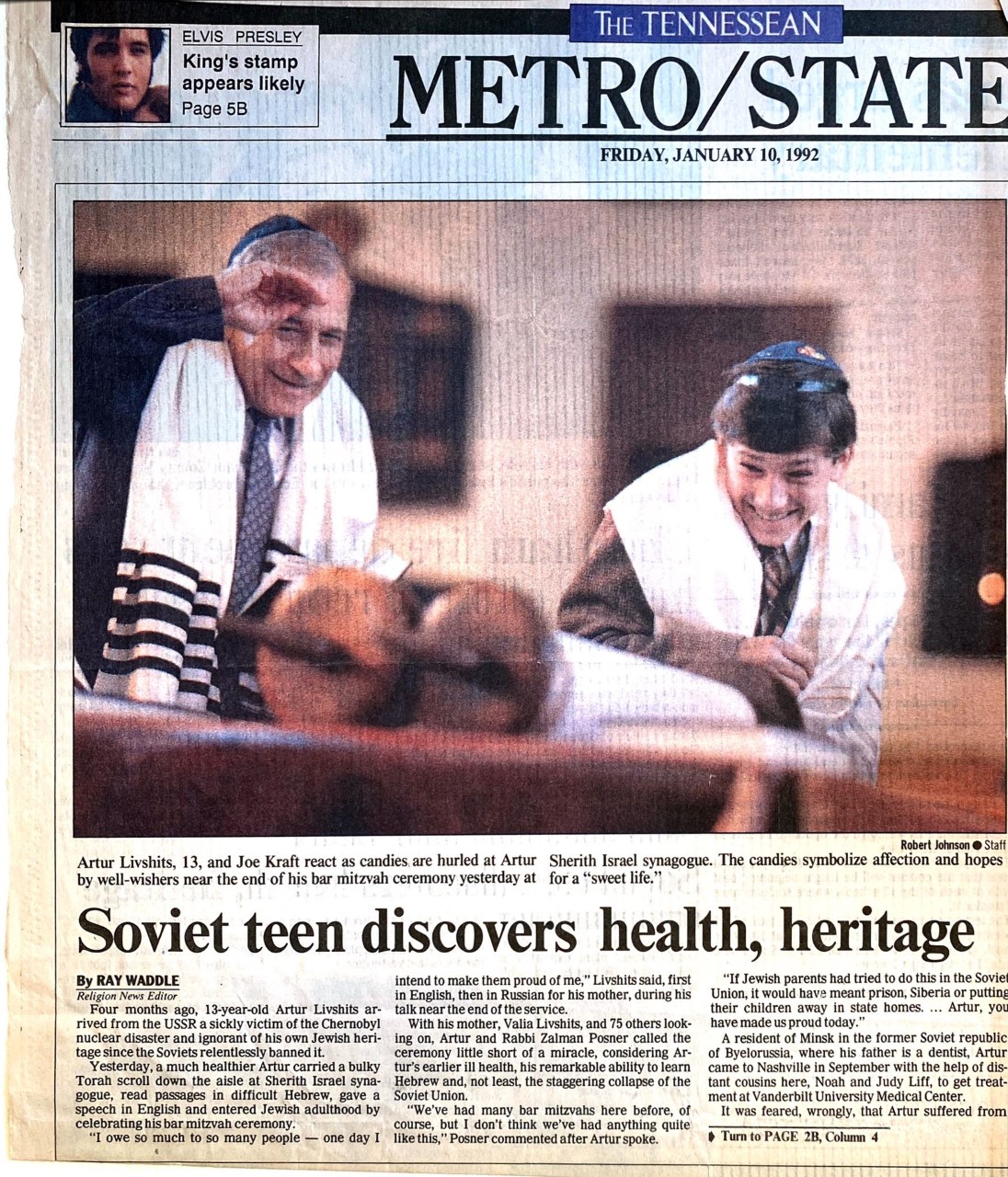 Artur Livshyts pictured in a Tennessean article about his Bar Mitzvah.

And so, after that very long journey, Livshyts settled into life in Nashville with the Liff family, attending Akiva School and services at Sherith Israel. Jan Liff, was in graduate school at Vanderbilt University at the time. But she remembers Livshyts’ arrival. “When he came here, he didn’t know anything about Judaism.” The transition was rocky at first because Livshyts did not speak English. “Everything was in English, so I had to learn that and then I also had to learn Hebrew, and then Jewish traditions.” Eventually, he connected with the person who would become his comfort, and his mentor. “Thanks to the late Rabbi Zalman Posner, who was really, really nice to me, he took me under his wing, and he checked up on me every day.”

Eventually, Livshyts adjusted to school, and it was then that Rabbi Posner decided he should have a Bar Mitzvah. “I had to learn to read the Torah. And I had to learn all the things that they learned [about Judaism] by growing up in their families. I had nothing in my family.”

Nevertheless, he forged ahead studying Hebrew, Torah, and Talmud. He says that although he did not grow up with Jewish practice, he believes that his Jewish heritage helped fill in the gaps. “I feel that as an Ashkenazi Jew, just by being in a Jewish society, you just start being Jewish. The language, the humor, wearing a kippah. It felt like I had been doing it all my life. It was very easy to take in.”

After living for two years in Nashville, Livshyts moved on to boarding school in Israel. The more he was immersed in Jewish life, the more he realized what needed to be done back home. He returned to Belarus to finish his education and study Human Rights Law and began working towards rebuilding the Jewish community in in the country.

In 2009, he met Debra Brunner, who had created a sister city program with her congregation in London. “I went to Belarus to visit our twinned community in the north of the country, and it was very hard,” says Brunner, “The aid organization wanted us to just send money, but we wanted to build a relationship. I didn’t speak the language, and it was all quite frustrating.” Just after her return, she was introduced to Livshyts who happened to be in London. Brunner says, “We got on very well. I had so many questions, and he was always so nice and willing to explain everything to me.” Brunner asked Livshyts to partner with her congregation and to be their eyes and ears in Belarus. “I didn’t realize that this work was part of his Jewish journey, and we invited him to become an overseas member of our congregation.”

During many visits to the sister city, Brunner learned about the depth and breadth of the remnants of Jewish life in Belarus. “I met survivors of the ghetto in Minsk who had never left. Artur kept showing me more and more. The more we explored Jewish Belarus, the more I realized this wasn’t just one small community that needs our support, this is a whole country that has a story that needs to be told.” This realization led Brunner and Livshyts to create a nonprofit, The Together Plan, specifically to support the rebuilding of Jewish communities throughout Belarus. “Creating the organization gave us a bigger platform to speak to more people about our work and offer them opportunities to support us.”

Today, The Together Plan has grown to become involved in a larger organization in Europe and Brunner and Livshyts recently created a nonprofit registered in the United States. Brunner says Livshyts continues to inspire her. “Here is this kid from the Soviet Union, who grew up with nothing in terms of Judaism. But Rabbi Posner kind of just poured it all back into him. He was like an empty vessel. I thought it was so fascinating that he went back to a country where there wasn’t an opportunity for him to use this. And he’s spending his life putting that back.”

The work of The Together Plan includes providing humanitarian aid to Jewish communities in Belarus, operating summer programs for youth, and plans are underway to build a Jewish heritage route throughout the country. “The core work right now is putting Jewish Belarus back on the world map,” says Brunner, “We are building heritage communities to tell the story of the Jews in Belarus.” Currently there are audio tours in several communities, all offered in many languages. The long-term goal, according to Brunner, is to build sustainability for the heritage communities through tourism.

Recently, Livshyts was appointed Vice Chair of the Jewish Religious Union of Belarus, a prestigious role that provides him with broader connection and support within the country. “I think it is important to learn about the Holocaust, but our history, the history of the Jewish people, does not begin and end there,” he says, “I want to remember the community from 200 years ago. How developed it was, how good it was, and how the Jews were so much a part of the town.”

Today, Livshyts is the father of an 18-year-old daughter who is a university student and is married for the second time. He says his family life is infused with the work he is doing and is grateful for the partnership with his wife. “I devote my time and efforts to the community. And my family helps me. My wife is very supportive of what I do and what we do with The Together Plan.” But his time in Nashville is never far from his thoughts. “I always remember what Rabbi Posner told me. ‘Wherever you are in the world, whatever you’re doing, keep doing what you believe in, and you will be successful.’ Those words I have carried throughout my life.”

To learn more about The Together Plan, or to discover your family’s roots in Belarus, visit www.thetogetherplan.com.