For many Jews, the idea of text study evokes memories of long afternoons spent in Hebrew School classrooms reciting the aleph bet and rote learning the Shabbat prayers. Upon completion of Bar or Bat Mitzvah, Jewish learning often falls off the schedules of busy teens and young adults. Keeping the connection to organized Jewish life and study is even more challenging during the college and post-college years. Nearly 50 years ago, a young immigrant to Israel, Michael Swirsky, conceived an idea of an institute of Jewish learning designed to be accessible, inspiring and inclusive of all denominations. The goal was merely to study and learn with no agenda and provided the foundation for today’s Pardes Institute of Jewish Studies. Rabbi Mark Schiftan of The Temple says it is the straight forward nature of the approach that is unique. “The Pardes rubric is to start with the simple meaning of the text and gradually peel back the layers. It is concise enough that the average person, with an average Jewish background, can come away with an understanding of how a page of Torah works.” The appeal of Pardes led Rabbi Schiftan to partner with the institute and bring a class to the Nashville Jewish Community. “Pardes is good at taking other than Orthodox Jews and helping them see the gift of their own tradition,” he says. 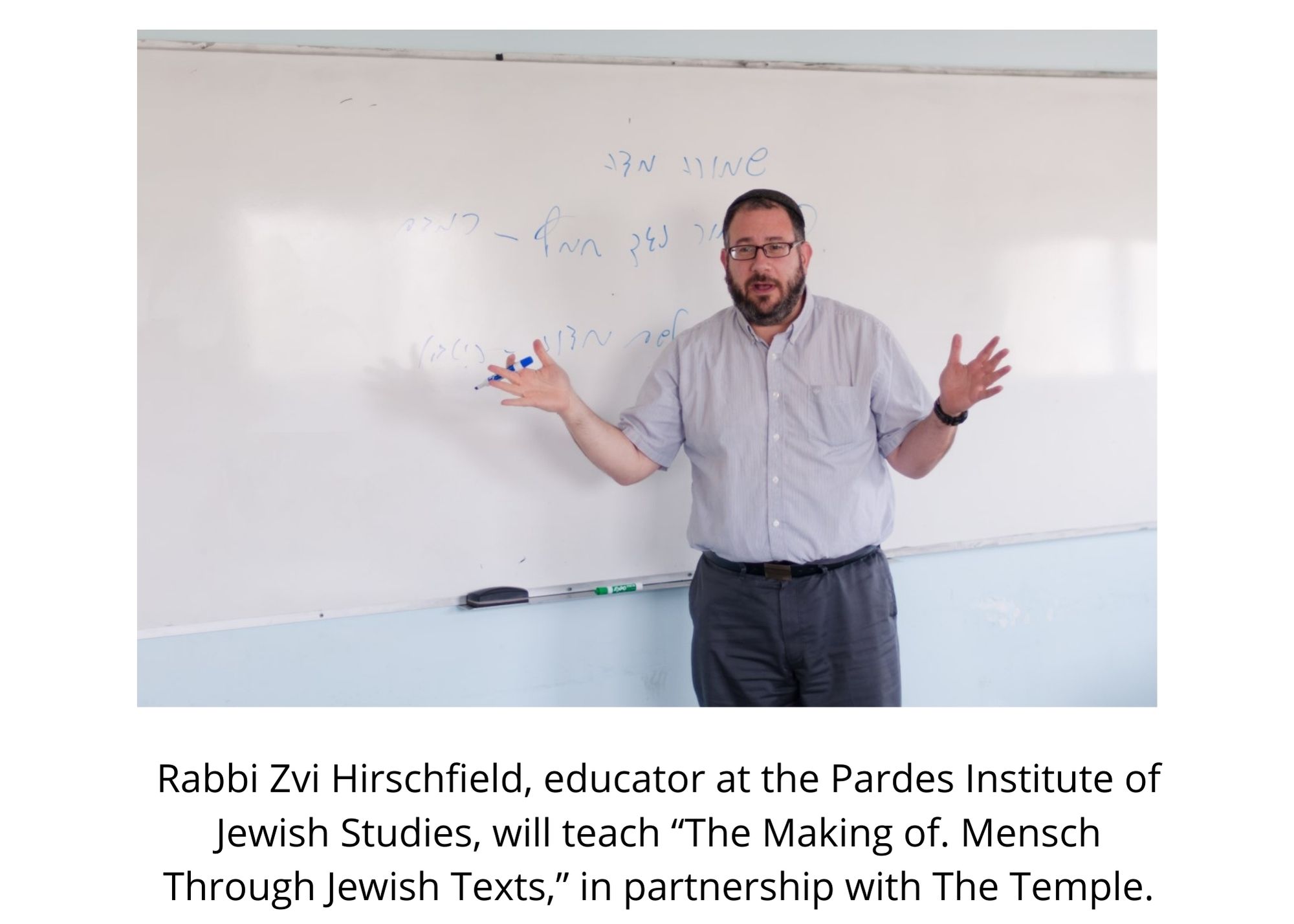 The upcoming class, which begins October 5th and continues for four consecutive Tuesdays, will be taught virtually by Rabbi Zvi Hirschfield. It’s title, “The Making of a Mensch Through Jewish Texts,” will use the Pardes technique of, “hevruta,” or partnership learning, that engages participants in a dynamic style. Rabbi Hirschfield says, “The focus is not on extracting wisdom form the sources, but rather from one another.” The technique includes two people grappling with the text together and bringing their individual perspectives into the discussion. Rabbi Hirschfield says the perfect study partner is someone who comes from a different viewpoint, particularly with the question of what makes a mensch. “The notion is that in theory, everyone wants to be good, but we all fall. We’ll explore why we fall and what it takes to cultivate goodness in our lives.” He says It is the diversity of opinion that creates opportunities for greater insight.

Pardes programs have been popular in Nashville’s Jewish community for several years, thanks to the generosity of some local donors. Moshe Werthan has been involved with Pardes for 30 years, both in Nashville and in the institute’s home base of Jerusalem. He says he was inspired to raise the level of Jewish learning because he found his own religious school education lacking in depth. “I believe the survival and growth of the Jewish people is through education,” he says, “I know what I didn’t get as a child and I don’t want our community to miss out now.” He says the Pardes style is particularly important in helping bridge the many ideological divides in today’s world. “In this time of tremendous divisiveness, people can’t speak to each other, or hear each other. Now is the perfect time for this type of interactive program.”

“Making of a Mensch,” classes are open to the entire community. Rabbi Schiftan, who will be retiring next summer, says he is proud of the ties he has created throughout the greater Nashville community. “This is the legacy I want to leave in my last year here at The Temple. I have tried to build strong relationships and to keep them going,” he says. The relationship with Parades is one of those legacy programs he hopes will continue. Mark Freedman is the incoming Chairman of the Board of Directors of the Pardes Institute. He is no stranger to Nashville’s Jewish community having previously served as the Executive Director of The Jewish Federation and Jewish Foundation of Nashville and Middle Tennessee. He says Rabbi Schiftan’s goals fit well with Pardes’ plans to expand its footprint in North America. “Pardes is making a focused effort to insert its programming into Jewish education in the US,” he says, “This growth addresses a thirst for greater understanding of Jewish text and our roots as a people.” And Moshe Werthan is happy to see The Temple taking a leadership role in expanding Jewish education in Nashville. “I grew up at The Temple so it’s exciting to see both where it’s come from and where it’s headed.”