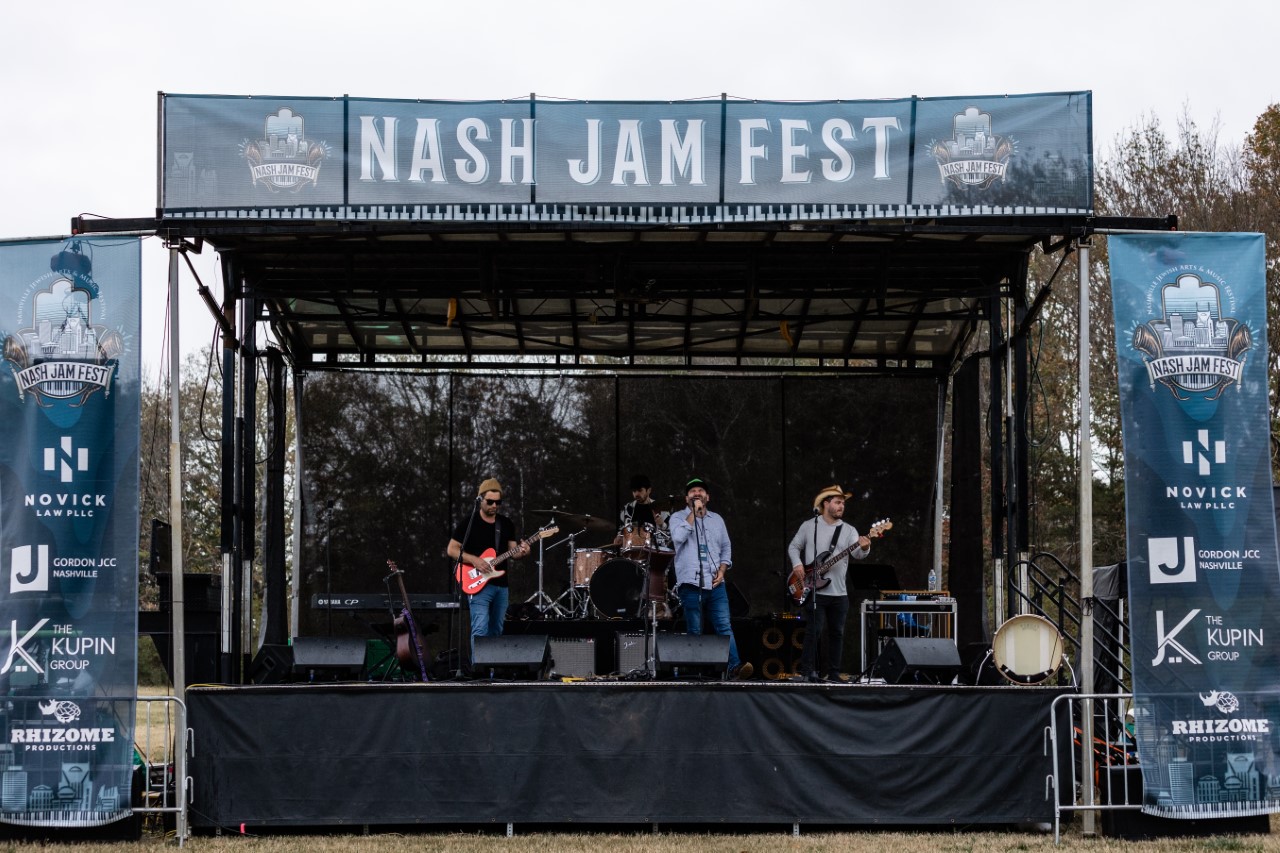 A few months after I moved to Nashville to be Cantor in Residence at Sherith Israel, Zack Ebin, a new friend, and professor of violin at the Blair School of Music, approached me with a proposition. “Do you want to help plan a Jewish Music Festival? After all, we are in Music City!”

Of course, I thought that should exist! But, having been on the other side of things, playing at Jewish Music Festivals for many years with my bands Blue Fringe and Distant Cousins, I knew how much goes into the planning of a festival. Needless to say, I was wary about taking that on.

After discussing the idea with my friend Matt Leff, whose production company, Rhizome, produces festivals and events professionally, it all clicked. Matt told me he would love to help and that since he was already planning the Kosher Hot Chicken Festival for Sunday, November 6th, we should just combine them and have both festivals together. After expanding our team of organizers, we were off to the races.

We knew we wanted the JAM (Jewish Arts and Music) Fest to be free and open to everyone, so we reached out to generous people in the community, who loved our idea. With many face-to-face meetings and even more requests, we were able to raise the more than $25,000 needed to produce this program successfully. The JCC was incredible to work with as they offered their outdoor field to us as well as many other resources along the way. After months of planning and promoting, including an ad in the Nashville Scene and an in-studio performance and interview at Lightning100 radio station, the day was finally here.

The morning started off with perfect sunny weather despite a forecast of rain. Hundreds of people lined up to taste the Kosher Hot Chicken and see what JAM Fest was all about. The miraculously dry field was filled with local art vendors, a beer garden, a kid’s zone (which was a big hit!), and even more kosher food options. Children were getting their faces painted, bouncing in the bounce houses, dancing along to the music, while the adults were schmoozing and enjoying the good food, good music, and good times.

Toward the beginning of the festival, Mayor John Cooper spoke about the town’s strong admiration for our ‘brilliant Jewish community.’ At a time when antisemitism is on the rise daily, it was powerful and appreciated to have the mayor’s support.

· Adam Weinberg, best known for having been Matisyahu’s guitarist for years.

· Distant Cousins, the folk trio from Los angles, NY, and Nashville (that’s me) were joined by Rabbi Saul Strosberg from Sherith Israel on trumpet for a special guest appearance.

· MOSHAV, an Israeli/American rock band from LA, MOSHAV, played an hour set of their catchy songs in both Hebrew and English.

The main stage also featured Cantor Josh Goldberg of Congregation Micah performing a beautiful set of his own solo material. He was then joined by Cantor Tracy Fishbein from The Temple, Julia Motis – songleader at The Temple, and me as we sung a few Jewish classics like ‘Oseh Shalom,’ and ‘Olam Chesed.’ The fact that we were all on the stage singing together in literal harmony felt very special and unique to this tight-knit Jewish community here.

Since this is Nashville, obviously we had an overflow of talent, so we created a ‘second stage’ and in between acts, we heard from:

· May, an Israeli singer/songwriter with a powerful voice.

It was also important that this festival have strong Jewish values and not just be another day of beer and fun, JAM Fest organizers Yossi and Natasha Amit arranged a Chessed booth which highlighted three projects for people to sign up and get involved with; the Oasis Center’s Underground Art Studio, the 15 Seconds Project (pen pals between local kids and kids in Israel who have 15 seconds to run for shelter when the sirens go off), and the Abe’s Garden Choir which will perform songs to lift spirits of folks in the memory care unit.

Halfway through the day, the clouds rolled in, and we got some good ole Tennessee rain. Although some people headed home, many people stayed and danced until the very end, when it got dark at 5pm. [Next year, we hope to have JAM Fest ponchos J ]

The day was a great success, and we are grateful to all the sponsors, volunteers, and everyone who came out to help accomplish what we set out to do – create a Jewish Arts & Music Festival in Music City to bring out Jews and non-Jews alike from all walks of life to enjoy good music, good food and fun. As the commercial on Lightning100 ended off in the DJ’s deep southern voice, “L’Hayim Y’all!”