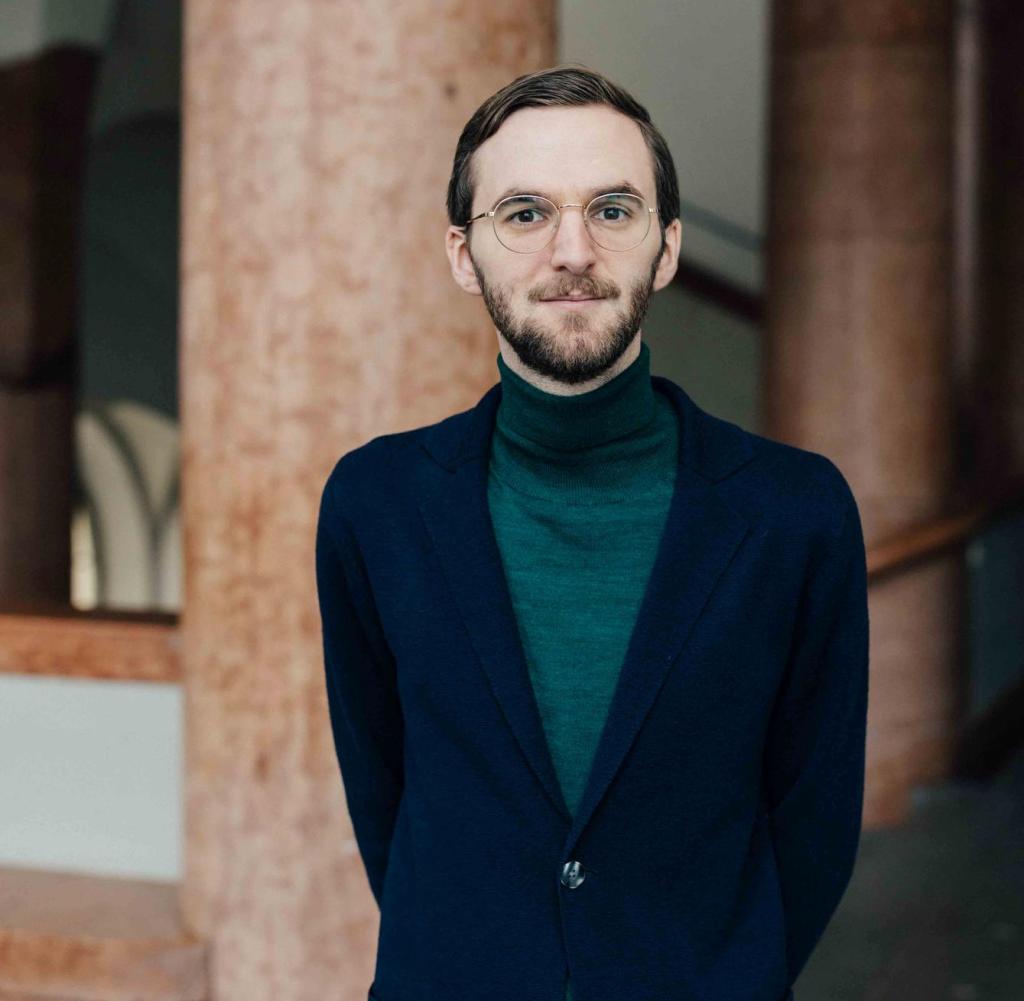 Levi Israel Ufferfilge, 33, a rabbinical student at the Zacharias Frankel College (“the College”) in Potsdam, Germany was the guest speaker at Music City Sisterhood’s annual Torah Fund event on Sunday, March 27th. Music City Sisterhood, a group for female-identifying congregants of West End Synagogue, supports the congregation with funding for its religious school and youth groups, runs its Judaica shop, volunteers in many areas, and educates and supports its members in performing rituals and traditions. The group is an affiliate of the Women’s League for Conservative Judaism (WLCJ), a more than 100-year-old nonprofit founded by the wife of the second chancellor of the Jewish Theological Seminary (JTS) in New York. In 1943 WLCJ began the Torah Fund campaign to raise funds for scholarships, programming, and learning spaces. In addition to the original JTS in NY and the newest Zacharias Frenkel College in Germany, Torah Fund supports students at three additional institutions: Ziegler School of Rabbinic Studies, CA, Schechter Institutes of Jewish Studies, Israel, and Seminario Rabinico Latinoamericano, Argentina. West End’s Rabbi, Joshua Kullock, graduated from the latter and its Cantor, Sarah Levine, from JTS. Education Director Sharon Paz also attended JTS.

Levi’s work is focused on preserving and rediscovering German Jewish traditions. This drive comes from his two greatest childhood influences – his grandmother and his tutor, both of blessed memory. His grandmother’s family was able to move to Manchester, England shortly after Kristallnacht, returning to Germany after the war. Levi describes his grandmother as someone who followed all the traditions, was disciplined and hardworking. She taught Levi that, because of the loss of so many Jews in the Shoah, Judaism was a “do-it-yourself” affair – if you wanted services, you had to learn to lead the prayers; if you wanted to study, you had to privately hire and pay a teacher. Levi’s father, who worked for NATO at the time, hired a colleague, Moshe Mendel, to be Levi’s tutor. He tutored Levi in all areas of Judaism, plus Yiddish and English, for ten years, ending when Levi finished grammar (high) school. Moshe Mendel spoke often of “der goldene kyte” – the golden chain of Jewish tradition, and the responsibility of each Jew to be a link. And if the chain was broken because of the Shoah, or Communism, it’s our opportunity to repair that break. Levi is infused with the hard work and discipline of his grandmother in the service of repairing de goldene kyte of his teacher.

This sense of responsibility and opportunity inspired Levi to study Judaism as a career choice. He moved to the larger city of Dusseldorf and over the course of six years earned a Bachelor’s in Jewish Studies and two Masters’ Degrees, one in Jewish Studies and one in Yiddish Studies. As a teenager in the late-1990’s, Levi thought that Germany had progressed enough from the lingering post-War antisemitism that he began to wear a kippah in public. He was proud to be Jewish and thought he shouldn’t to have to put away this visible sign every time he left a Jewish space. He immediately was subjected to harassment, which increased to three or four incidents a day in the larger city. It was a nightmare for his parents and grandmother, who were in constant fear for his safety. He was overwhelmed, angry and at a loss for what to do. The German police weren’t helpful because they were in denial that antisemitism still existed, outside of occasional vandalism of Jewish cemeteries. His grandmother advised him to write everything down, it would be a safe place to put all his fear and anger, rather than keeping it inside and feeling powerless. It took one year for him to fill his first “antisemitism diary”, as he called it. The second one took half as long.

Shortly after Levi moved back to Munster to begin his doctoral thesis in Halakah (Jewish Law) and Ethics, he was diagnosed with cancer. In 2017 he moved to Munich for treatment where his oncological surgeon was a Palestinian Muslim from the Gaza strip, who treated him kindly and professionally. As he went through treatment with its uncertain outcome, Levi thought, “As a good German Jew, I should write a book in my life. And this could be the last chance for me.” After years of urging from friends and family, he turned his “antisemitism diaries” into a book called Nicht ohne meine Kippa! (Not Without My Kippah!} which was published in 2021. To his publishers’ surprise, the book sold well. It is now being recorded on audio and translated into French. An English version is under consideration.

Concurrent with his education, and even during his cancer treatment, Levi was a teacher and lay-clergyperson for the local schools and Jewish communities where he lived. Under a joint initiative of the Bavarian (regional) government and a private Jewish nonprofit organization, Levi was part of a group of educators sent to the Southern United States to learn best practices for providing Jewish education. “They didn’t send me to New York or Chicago or LA, because they thought these conditions are incomparable. You could never adapt New York Jewish life to Germany in any form. They thought, ‘We have to send him to a real Jewish diaspora’.” He spent two weeks visiting several congregations in North and South Carolina, run by every denomination. The most moving event of the trip was the 97 year-old Shoah survivor who spoke to him in flawless “high” German immediately, which he hadn’t spoken since fleeing the country.

In 2020 Levi became the interim Headmaster of the Berlin Masorti (Conservative movement) Primary School while also beginning seminary studies at the Zacharias Frankel College. The opening of the seminary in 2017 signaled a large revival of Jewish life in Germany, where Frankel originally founded it, calling it “historic positive” Judaism. Although all of Levi’s current classmates are from other countries in Europe, internships are primarily in German Jewish communities, to aid their growth and revival. Levi describes the school as very European and cosmopolitan, with the biggest challenge often being which language to speak.

In 2021, Levi became a Rabbinic Intern in his hometown of Munster. Additionally, earlier this year Germany reconstituted the military rabbinate, which is the last Jewish institution to return to public life in Germany. Levi is now chaplain for the Army and writes speeches for the Hungarian head of the rabbinate, as well as Halakich (Jewish Law) response literature on military ethical issues, such as the treatment of prisoners of war. He expects to be ordained at the end of 2023 and return to Munster as its first full-time rabbi since the Shoah.

Levi inspired all the Music City Sisterhood members in attendance with his passion for reviving German Jewish traditions and leading their observance. We’re grateful to know that our Torah Fund contributions are helping to creating a vibrant Jewish future in Germany. The 2022 campaign is accepting contributions through June 30, 2022. Contact president@musiccitysisterhood.com if you wish to donate.

Some statistics about Jews in Germany:

“We are a nice bunch of very different people, stuck into one and the same community. We have [an] interesting form of unified community, so if you like it or not, everyone – secular Jews, Orthodox ones, liberal, Conservative – they all need to be squeezed into one community, in one place, so that we can afford to have everything that we have. So, it’s a nice melting pot of different Jewish people. And you know the Jewish people – we are a very easy-going, simple people, of like-minded creatures, we are always alike and never have different opinions – so, it’s very easy to be in a Jewish community in Germany.” Levi Israel Ufferfilge