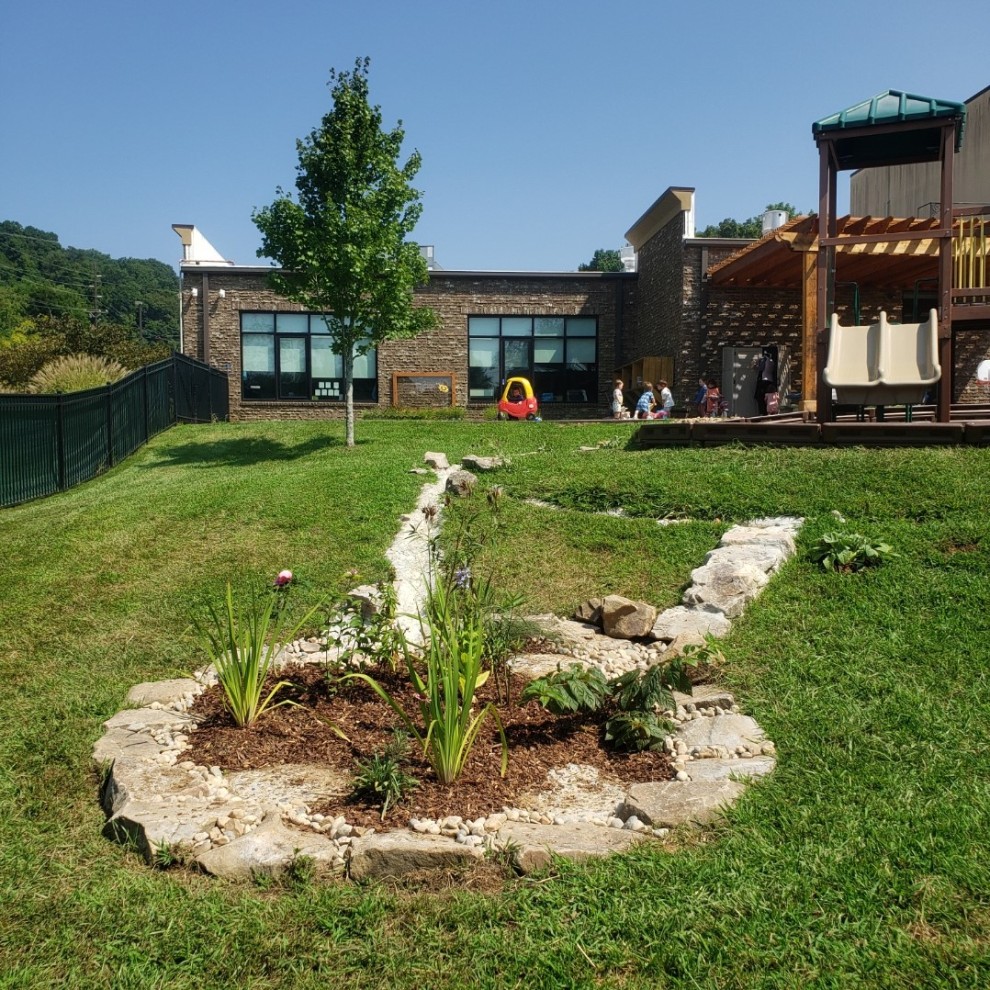 A trickling stream, a birdwatching wall, and a stage filled with musical instruments are but a few of the dreamy features of the Revere Montessori Preschool’s new outdoor playscape. Created to take advantage of the existing playground and surrounding topography, the outdoor space beckons both children and teachers to go out and explore. Esther Tiechtel, the school’s Director, says attention was paid to even the smallest detail to encourage learning. “The goal was to create a natural setting that would help with gross motor skills and imaginative play. A concrete artist created a creek that winds downhill to watch the water flow, there are tiny blue stones that look like sea glass, everything was considered.” 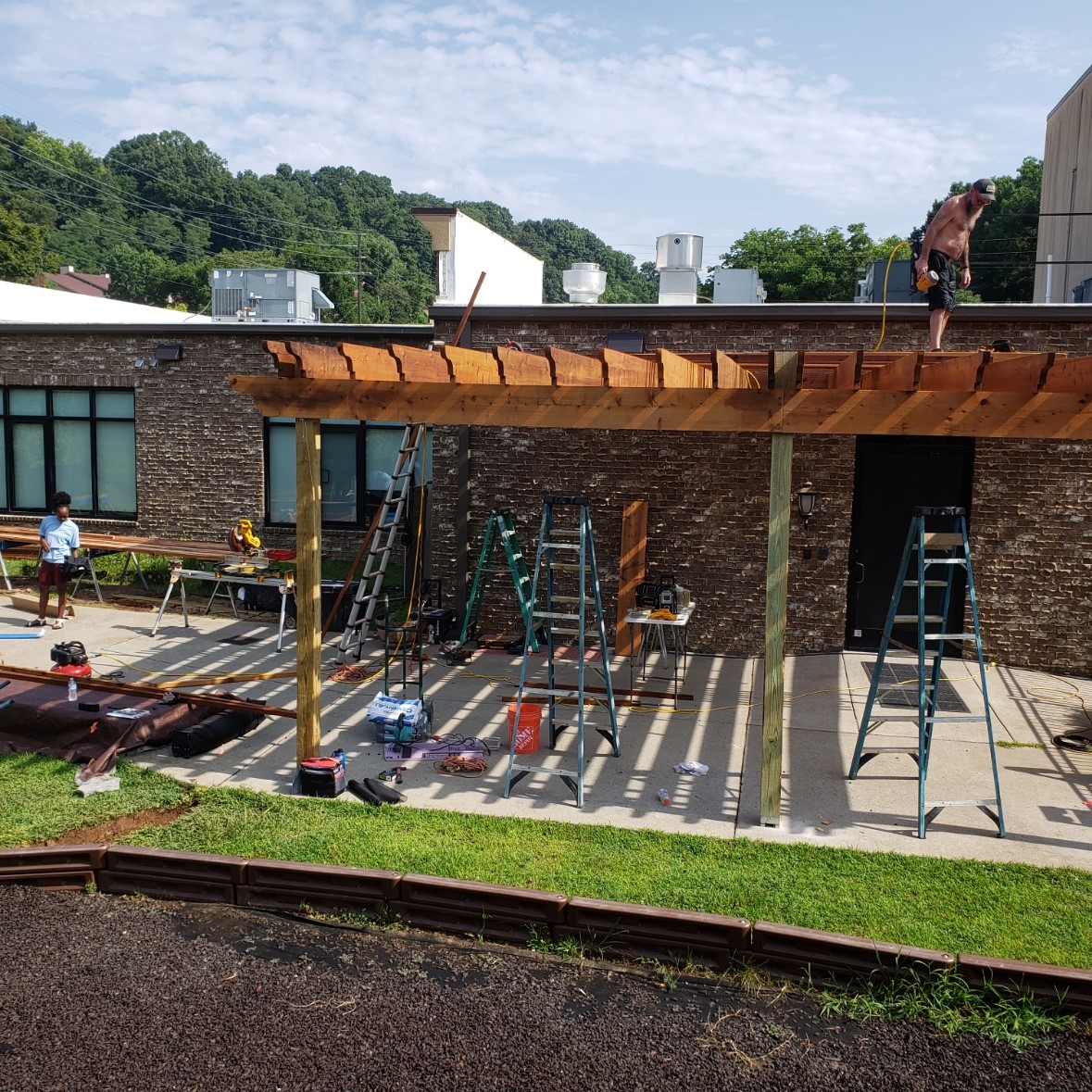 The project was designed and managed by Corye Nelson of Creative Construction Concepts. According to Tiechtel and her teachers, Corye’s previous experience as an early childhood educator, most recently at The Temple, was an asset when it came to creating the right environment. Debra Turciano, one of the teachers, says she was particularly happy with Nelson’s process, which included checking in with the students first. “The first thing she did was engage the children. She invited them to sit in a circle and talk about what they wanted for the playground, and then had them draw pictures. I knew right then it was going to be a special place because of Corye’s background.”

Using words like “magical,” and “enchanting,” Turciano says the space has added another resource for lesson planning and learning. “It’s just opened up so many possibilities to utilize the outdoors. We can study physics, properties of matter, density, and gravity. We can celebrate holidays and lifecycle events outside, too.” The space also offers new opportunities for gross motor development. Devora Davidson, mother of two-year-old Charlotte, says she has seen a big improvement in her daughter’s skills. “She had some developmental delays and wasn’t walking when she started preschool. But after spending some time in the new space, she was encouraged to learn to stand better and now she’s walking,” she says. Davidson says being able to be outside more has also been good for her daughter’s social development. “When she sees the other kids out playing, she wants to be included, too. During the COVID19 pandemic, she’s spent so much time with just us, this is giving her a chance to be around other people and to grow in a social way.” 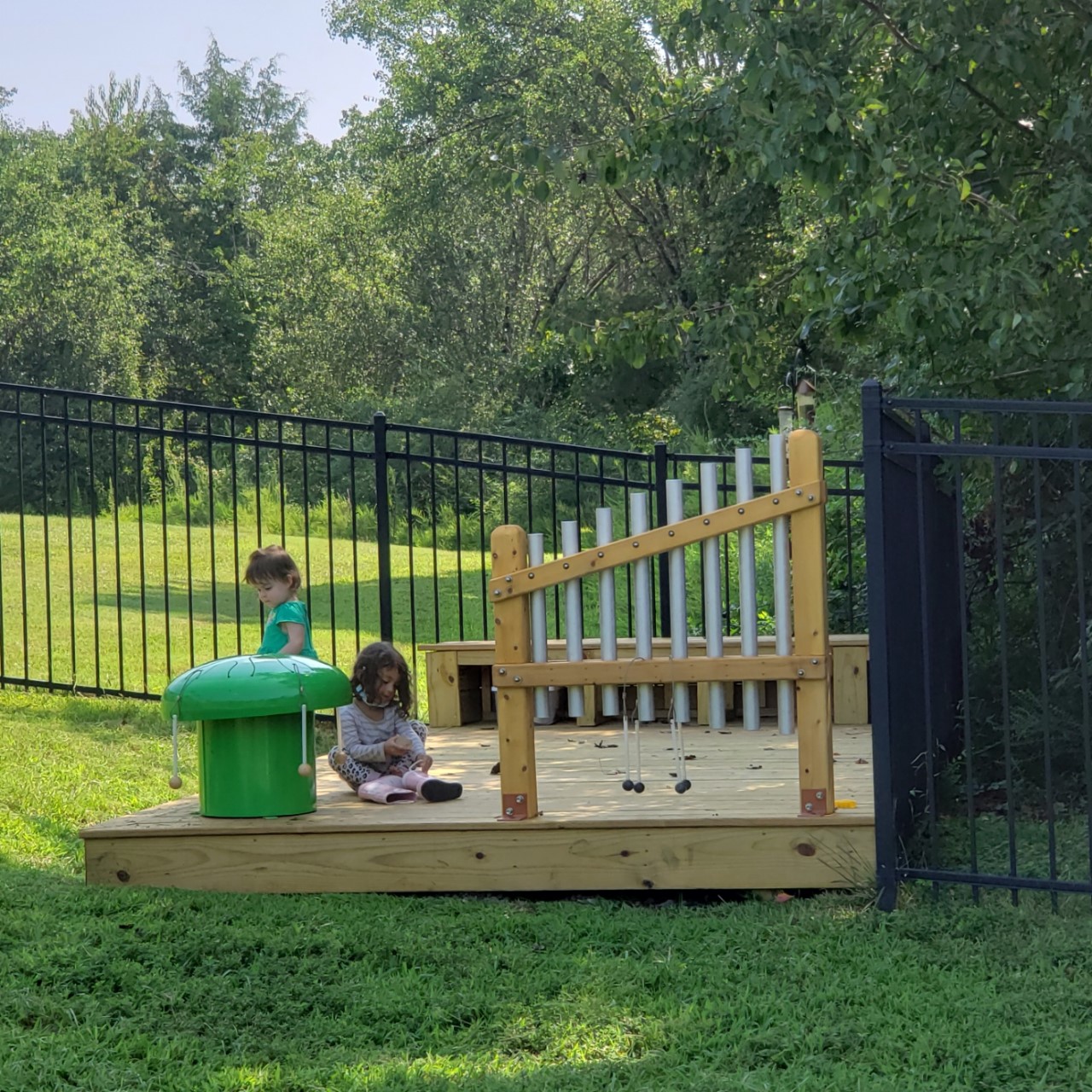 Nelson says in approaching the project there were a few problems to be solved with the space, namely the lack of shade and some drainage issues. The result is a massive pergola that now soars over the space, which can even be used for non-school events like dinners and guest speakers. The sand box has a large sail that also provides shade while in use and becomes a cover when the children are absent. Turciano says the design is helpful in engaging the teachers, too. “Before there was no shade and no place for teachers to sit while they interact with the kids. No every station has appropriate seating and it’s more comfortable.” As in her previous design work for The Temple Preschool’s playscape, Nelson says attention to detail is key in creating a space that will last for a long time. “It’s important for teachers who work with the very youngest children to be intentional about the space, to be proactive.”

As the seasons begin to change, and the days become cooler and the landscape transitions, there will be new things to discover in the outdoor playscape. The gardening center, now full of fall blooms and vegetables, will soon be sparser, allowing for a different experience with outdoor play. Turciano says that, too, is part of the plan. “We are helping children become solution seekers. When the garden looks different, the grounds are different, how will they work with the space in a new way?” And thankfully, as changes to the space become necessary, Nelson will not be too far away. “She keeps visiting us and checking in,” says Turciano, “With her help, we can learn new ways to adapt to the changing seasons.” And school Director, Esther Tiechtel says she is grateful to the anonymous donor who provided funds for the project, and the many parents who continue to contribute. “We’re just thrilled with how it all turned out and excited that the timing was finally right for this playscape.” 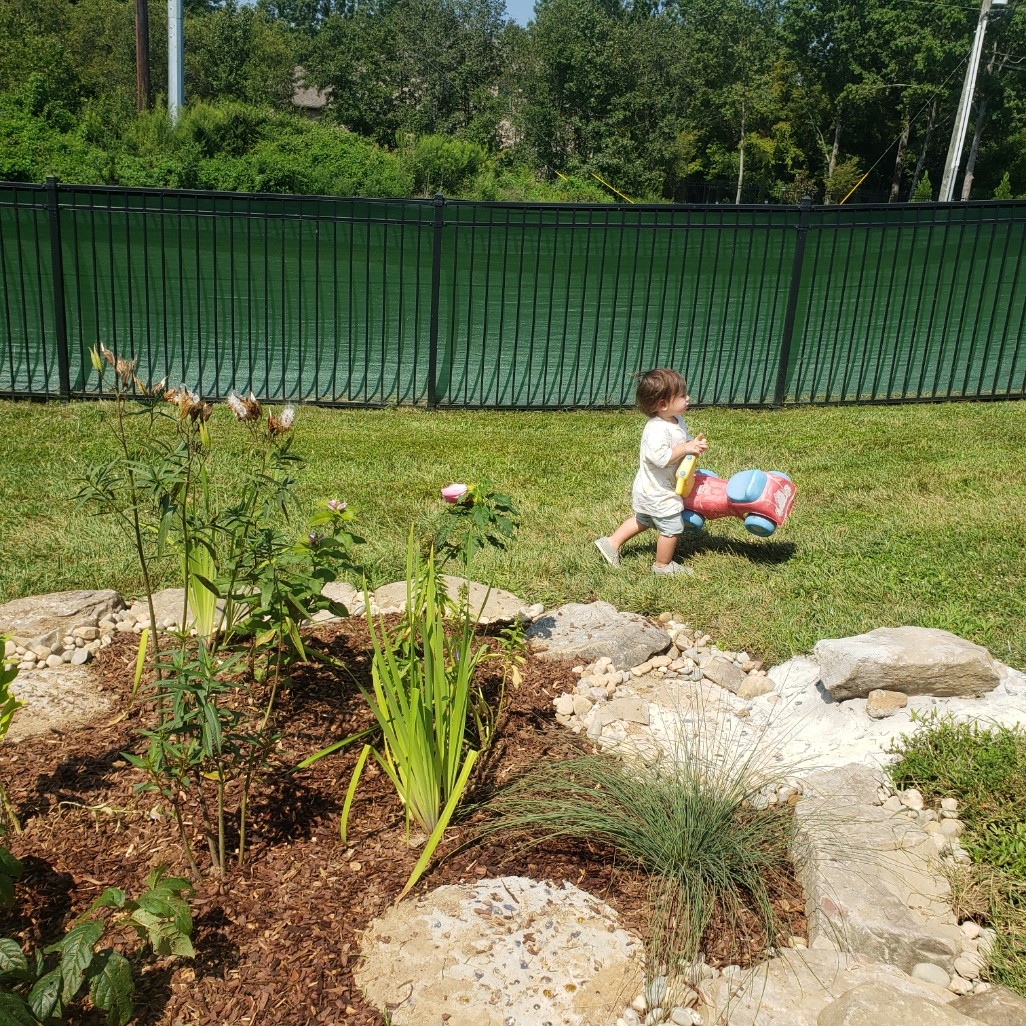