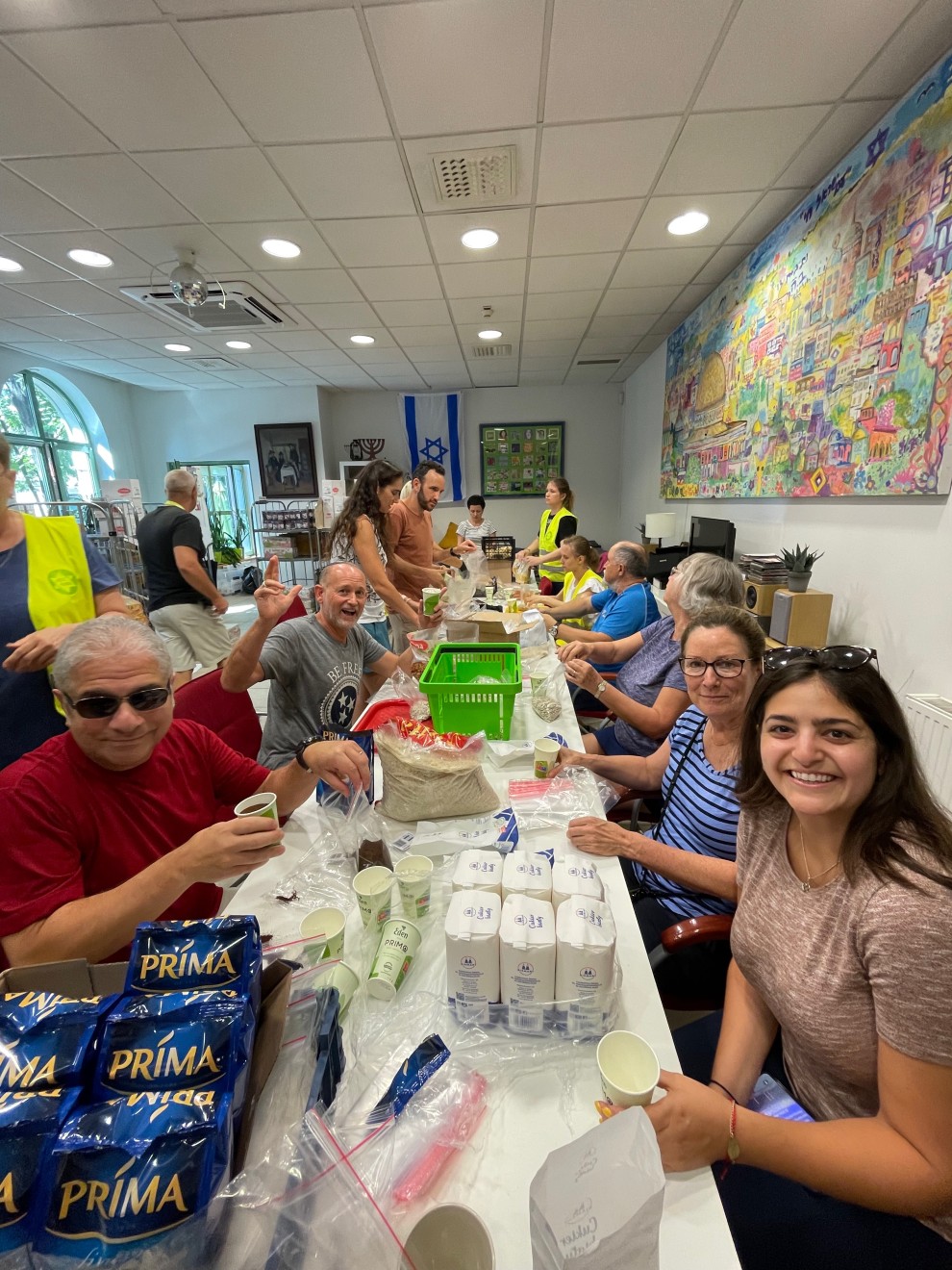 Last month, we read reflections from the participants of The Jewish Federation and Jewish Foundation of Nashville and Middle Tennessee’s recent mission to Poland to provide humanitarian relief for Ukrainians fleeing the Russian invasion. We also read about efforts, in Warsaw, by the Jewish Agency for Israel to help Jewish Ukrainians make Aliyah to Israel. But that was only part one of the report. Following the visit to Warsaw, the group traveled to Krakow to provide hands-on support at three locations, the Krakow Jewish Community Center, and Paszkowka JCC Krakow, a residential center managed by the Krakow JCC for Ukrainian refugee families, and the Szafa Dobra Refugee Center. 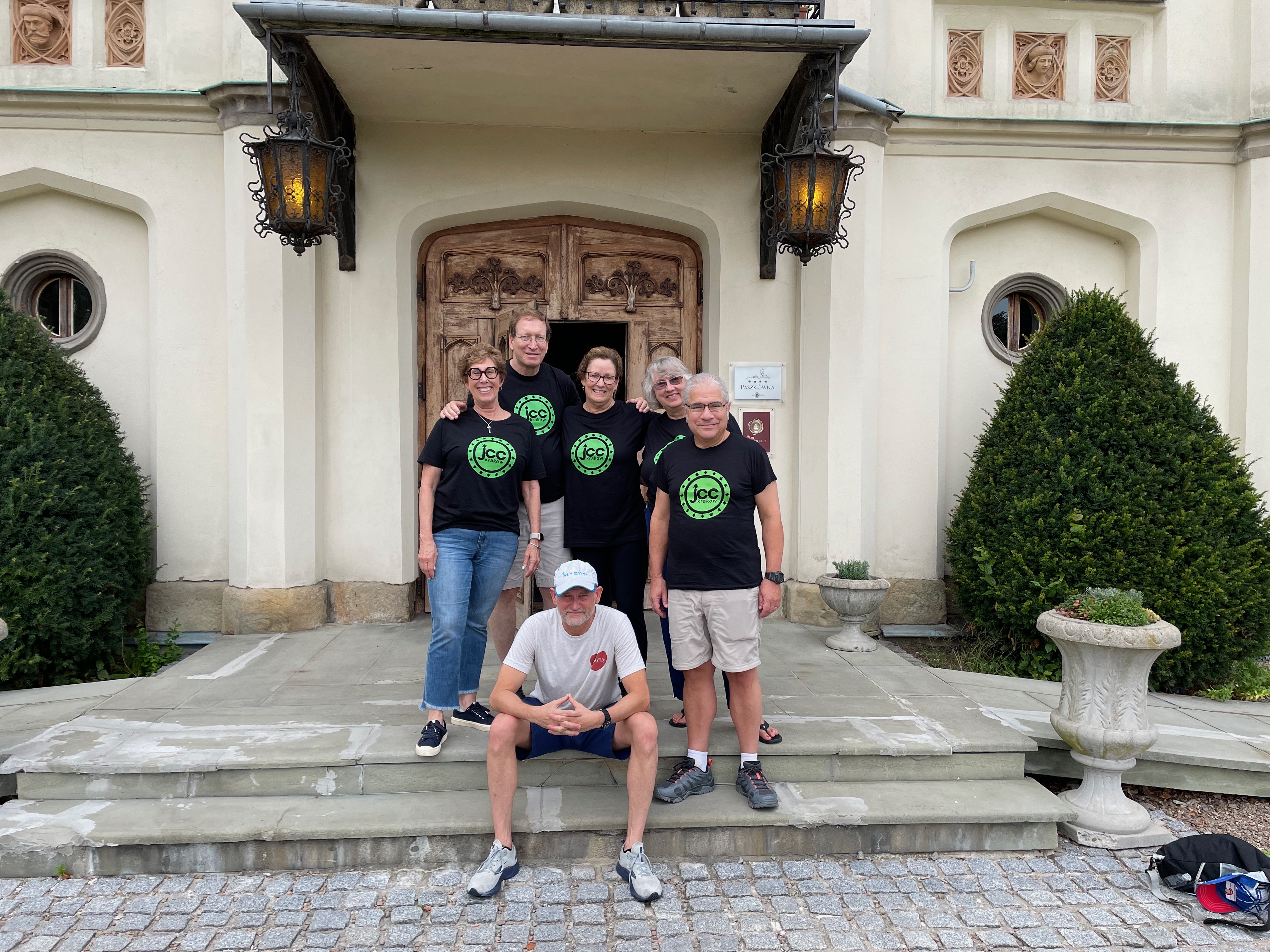 The first stop in Krakow was the Jewish Community Center. The group was greeted by Klementyna Pozniak, a young woman who is a Roslyn Z. Wolf-JDC International Fellow, a program established by the Cleveland Jewish Federation. Pozniak grew up in Poland and Cleveland, Ohio. She was awarded a Fulbright Scholarship to teach English in Ukraine in the Fall of 2021. As word spread of the impending invasion, the program was indefinitely suspended, and she accepted the fellowship and returned to Krakow. “I could have gone back to my life in the U.S., but I am committed to helping rebuild Jewish life in Poland,” she says. Pozniak is not alone. The group met with several other people who all believe in the future of Jewish life in the country. 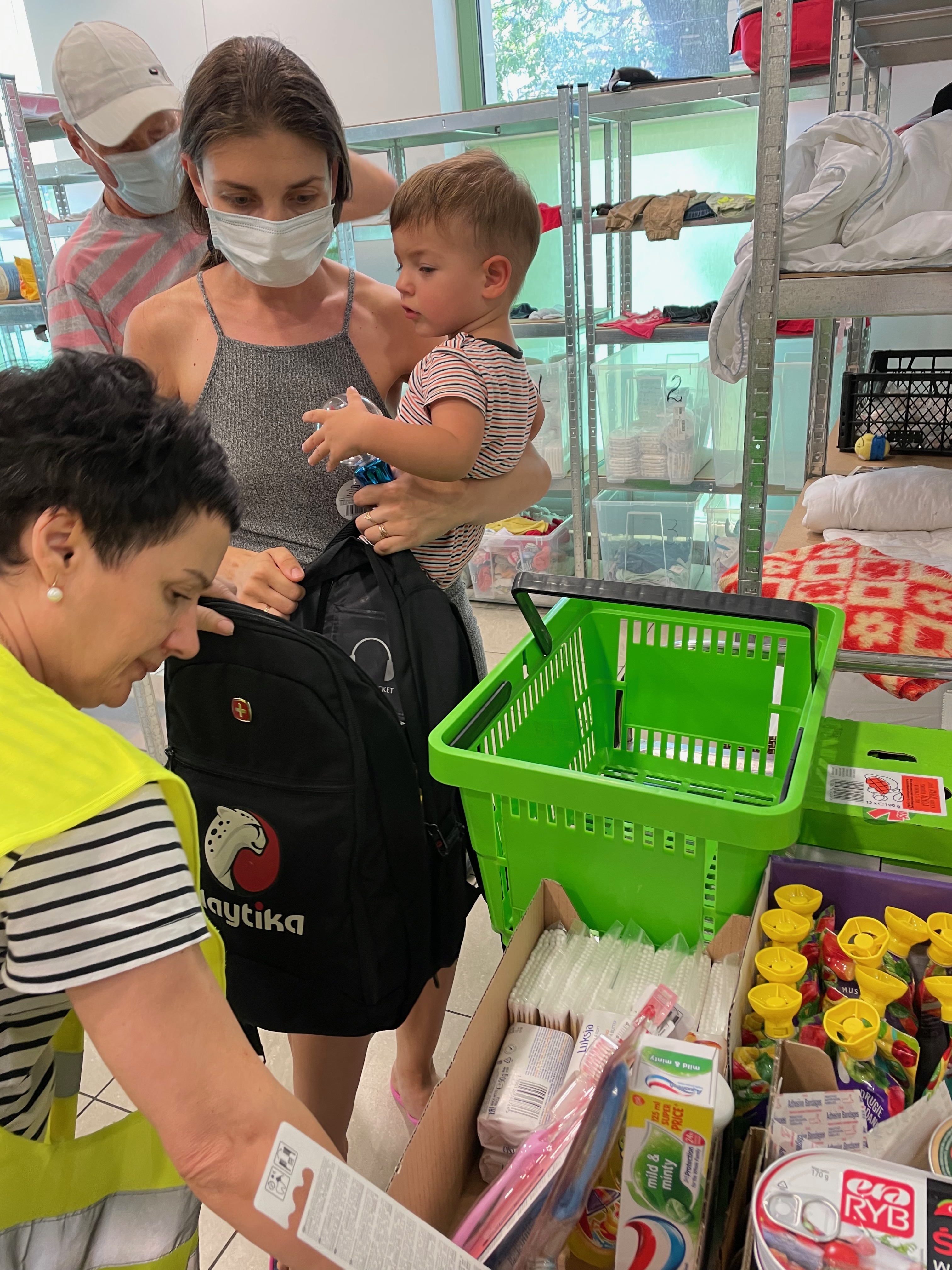 Families shop for basic necessities at the JCC store

Currently, the Krakow JCC is focused on providing aid to Ukrainian refugees, the vast majority of whom are not Jewish. Early in the morning a line begins to form outside the gates of the building where people wait for their turn to shop in the converted storage room just inside the entrance. There, shelves are filled with everything from toiletries to canned goods, t-shirts and underwear, shoes, and other basic necessities. The room is arranged like a store and people file in to shop. 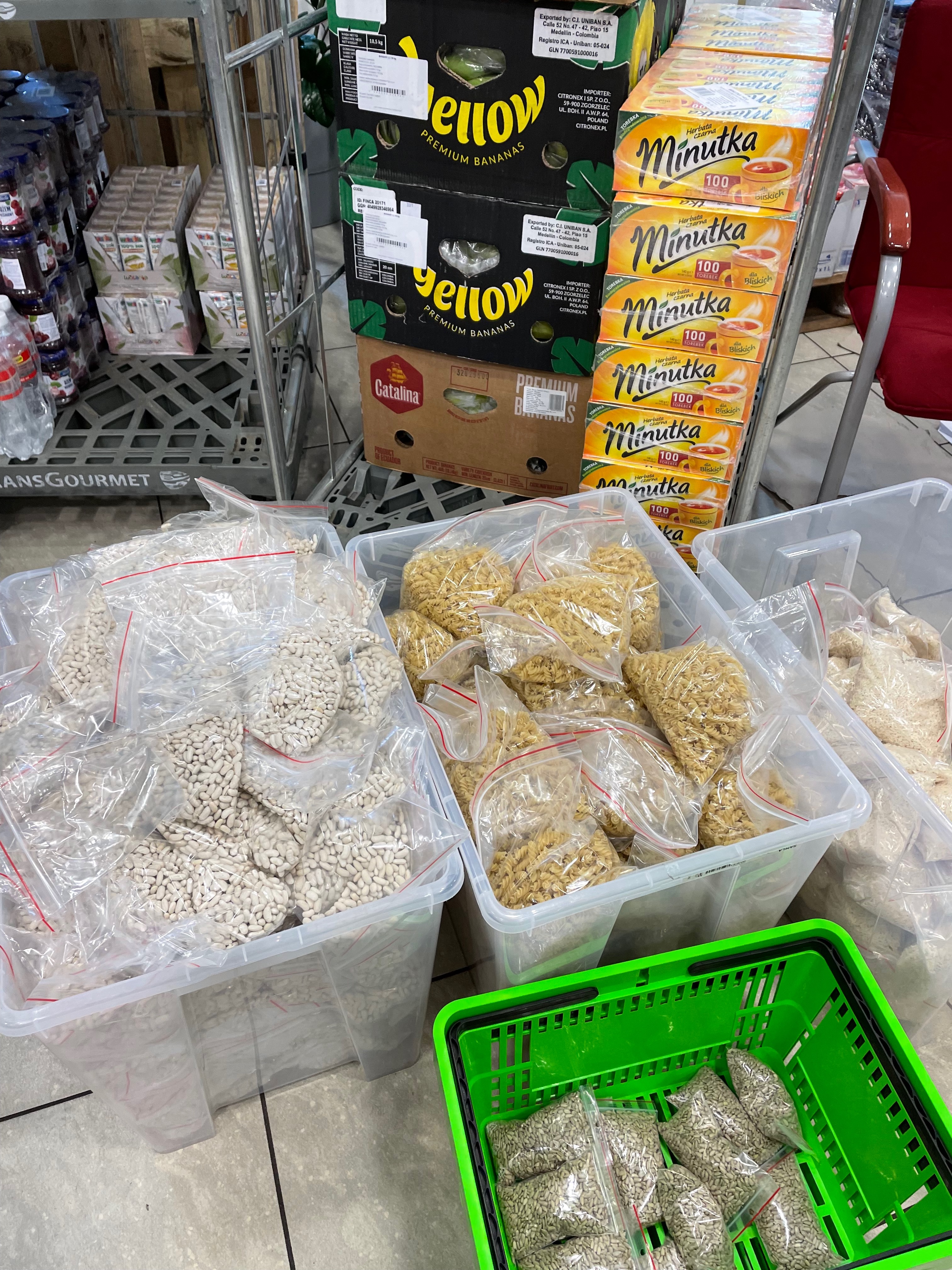 Bulk items ready to be shelved in the JCC Store 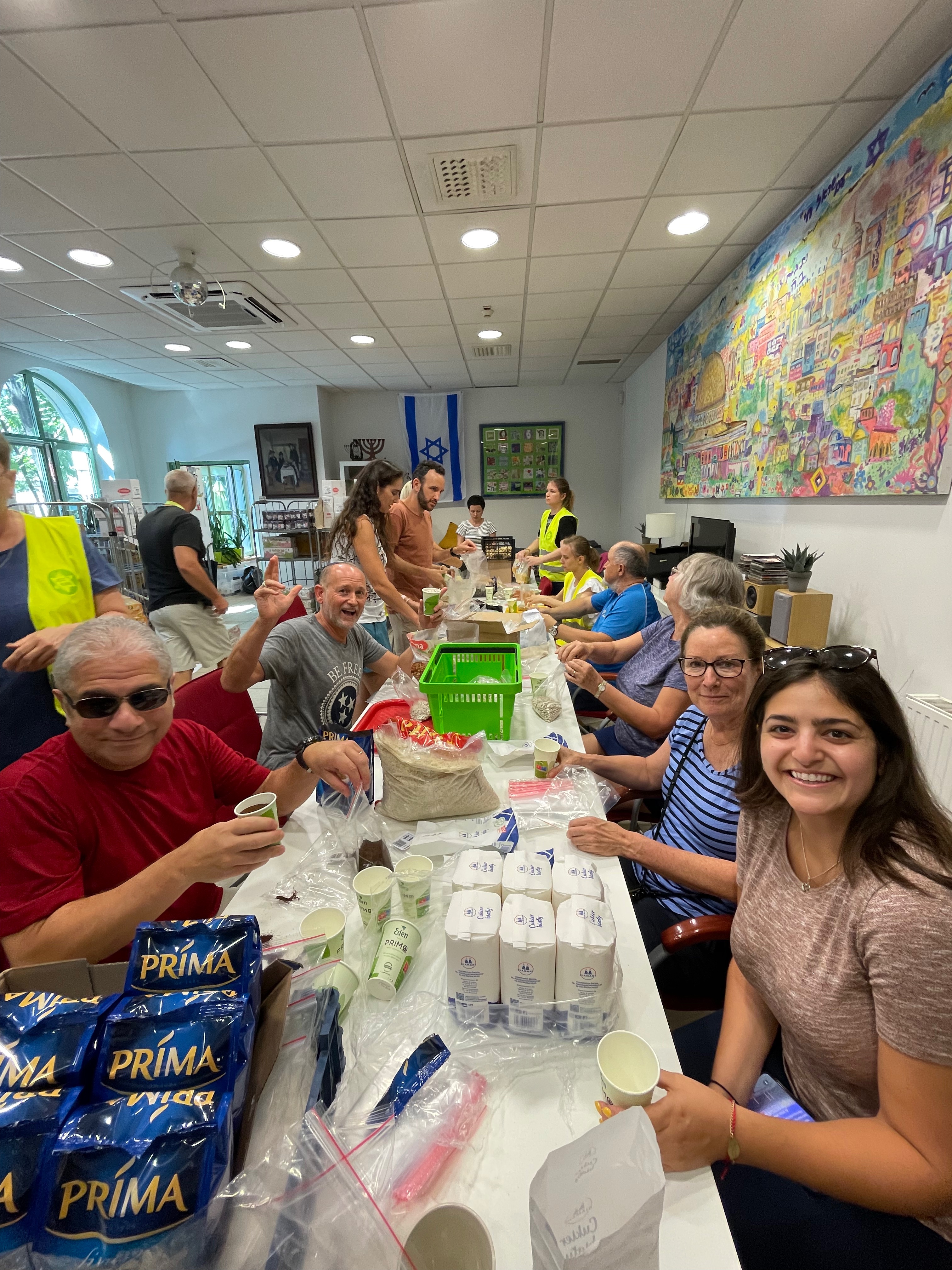 On the other side of the entrance is another small store room. Volunteers from around the world gather to package bulk items into smaller, more manageable containers. Here is where the Nashville group spent the afternoon. The conversation was lively as mission participants worked among the bags of rice, coffee, tea. Someone noticed a small photo on the wall, dated 2002. Pictured was King Charles, then Prince of Wales, and his wife, Camilla Parker-Bowles. During their visit that year, the King was struck by the resilience of the Jewish people in Poland and asked what he could do to help. The result was funding to help create the first such center in Poland. Pozniak says, “It was a surprising and amazing thing he did to help build this place. We are grateful for that.”

As that first afternoon in Krakow wore on, the flow of people lining up never stopped. Rabbi Flip Rice, of Congregation Micah, entertained the young children with donations of toys he had brought. “This makes me so happy,” he said, “I just love to see their faces light up and even if we don’t speak the same language, we are communicating.” And while the children played, their parents stood in line, in the summer heat, waiting for their turn to “shop” in the makeshift store. In fact, after the JCC closed its doors and locked the gate at 5:00pm, people continued to stop by the building, hoping to find it open. 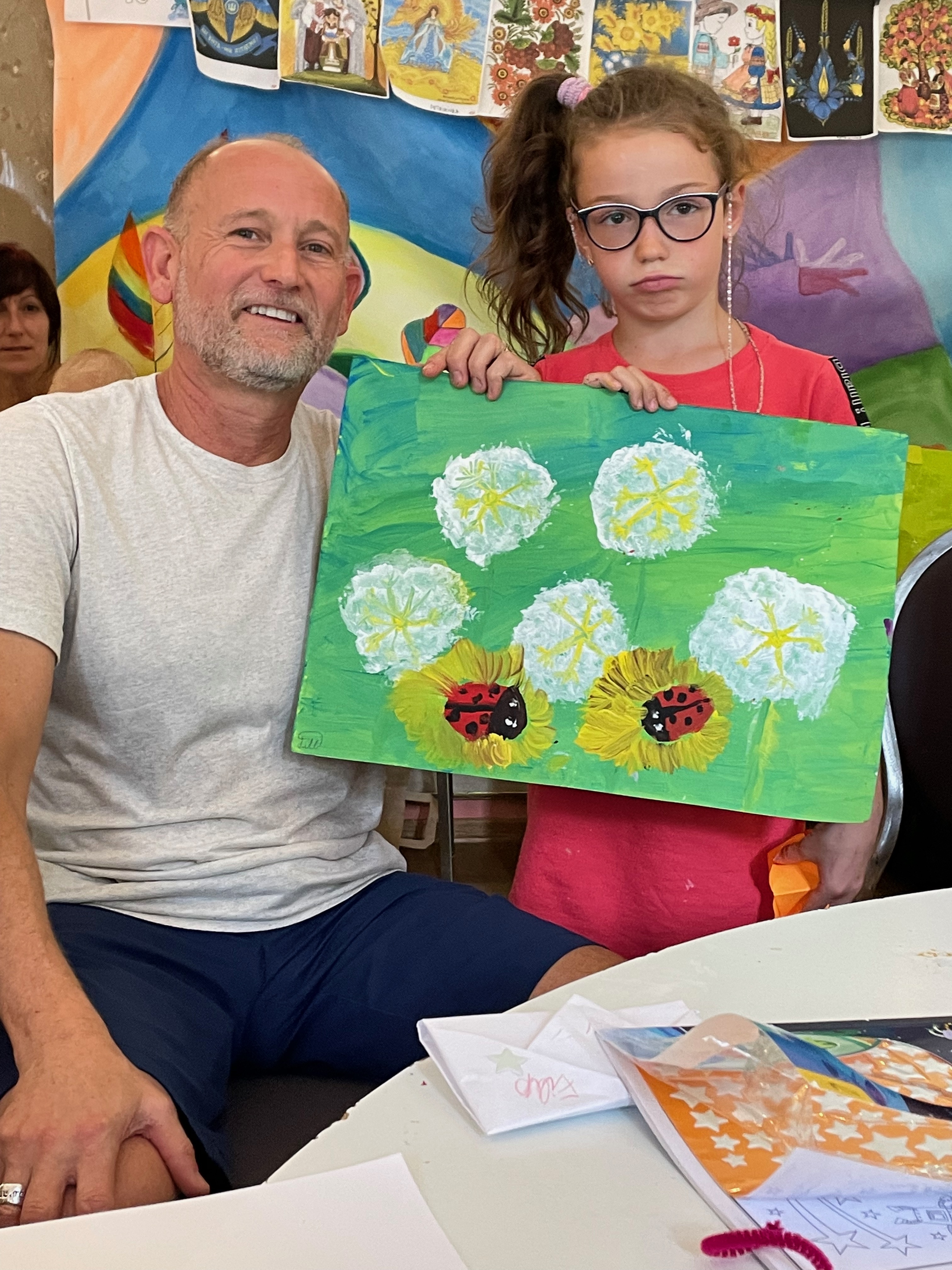 As Shabbat approached, Pozniak reflected on the refugees and worried about their future. “The refugees are living in Polish homes. But it’s been six months, and the Polish people are getting tired, too. Plus, they can get more money for rent from college students who will be returning. There is a real concern for lack of housing.” She said more than half of the refugees want to go home as soon as they can. “Unlike in most refugee situations where people leave and don’t return, in this case families are broken up, so the refugees here want to go back.”

The next day, some of the mission participants toured Auschwitz-Birkenau Memorial and Museum. The tour guide, 35-year-old Barbara, is not Jewish but was born and raised in the town of Auschwitz. When asked why she chose to guide tours of the former concentration and death camp, she said, “My grandmother helped to smuggle food and clothes to the prisoners in the camp. When I learned about that I felt that I should do my part to make sure this never happens again. I began to lead tours here to share the story with as many people as I can.” The mission participants were quiet during the tour, asking occasional questions of the guide. Rabbi Rice said, “It’s so hard to get my head around what people do to other people. It makes me so angry.”

While one group was visiting Auschwitz-Birkenau, another group was volunteering at the Szafa Dobra refugee center. Hailey Levy-Kupin said this is a big box type of store, similar to the one at the JCC, but on a much larger scale. Levy-Kupin and Denise Alper were tasked with counting the numbers of people who shopped, while Ned Jacobson assisted with checkout. At times, it was tense as people jockeyed for shopping bags, something in short supply. “It was pretty interesting,” says Jacobson, “At times people became short tempered with each other, and we

had to help them through it.” Added to the stress was the fact that the center would be closing later that day with no idea where it would be relocated, meaning refugees in line grew more desperate to shop. Levy-Kupin said, “It was so hard. Everyone felt worried and stressed no knowing where they would be able to go when these supplies ran out.”

A highlight of the trip, according to the participants, was a visit to the Paszkowka JCC Krakow, also known as the Palace. The Palace is a converted country estate that houses refugees and their families, and has space for classes, therapy and exercise groups, a dining room, and a beautiful outside space where the children play, throw a ball, and try to reclaim some of their carefree childhood. The facility is privately owned, and funding for rent and other expenses is being donated by a benefactor in the United States. 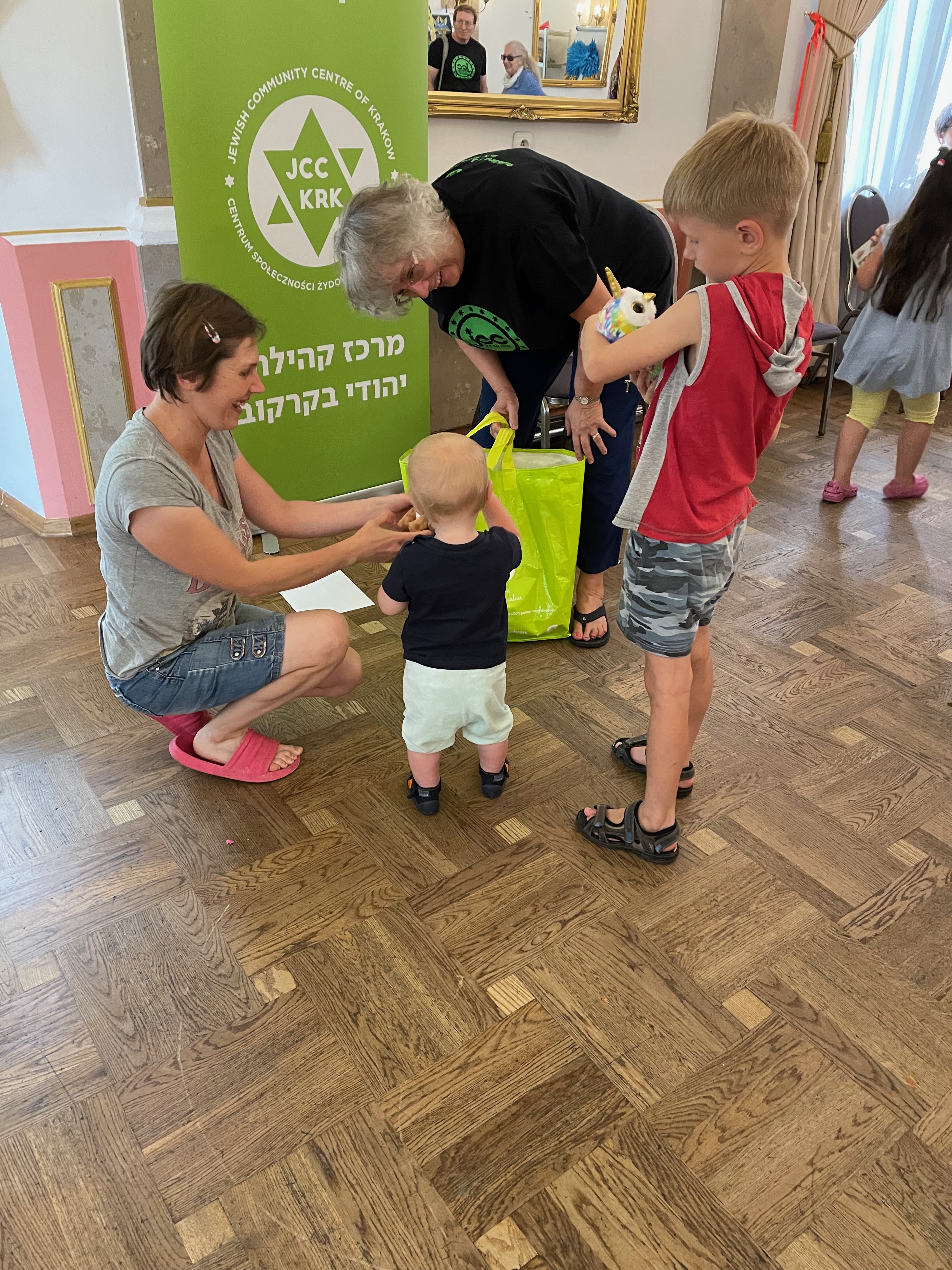 Federation Past President Carol Hyatt visits with a family at Paszkowka

Upon arrival, the group was treated to a lunch of homemade soup, bread, vegetables, salads, and other regional foods. Jolanta Małgorzata Kozioł is the administrator of Paszkowka. She explained that most of the people living there are women and children. “The men under 60 years old, by law, must stay in Ukraine and be ready to fight. So, the women and their children here are very stressed and worried.” She showed the group to a large room, lined with tables filled with art supplies. The mission participants were invited to spend some time with the children and their parents. Some of the children happily joined in, while others were uncertain. One young girl, named Diana, sat next to her mother, painting. Rabbi Rice approached and quietly began to engage the young artist by asking questions. Diana was silent, answering with nods of her head. As the girl became more comfortable, she answered some of Rice’s questions and softly described her paintings. “She was obviously very stressed at first,” says Rice, “But as time passed, she opened up a bit. I could see she had some tension with her mother, which is understandable.” 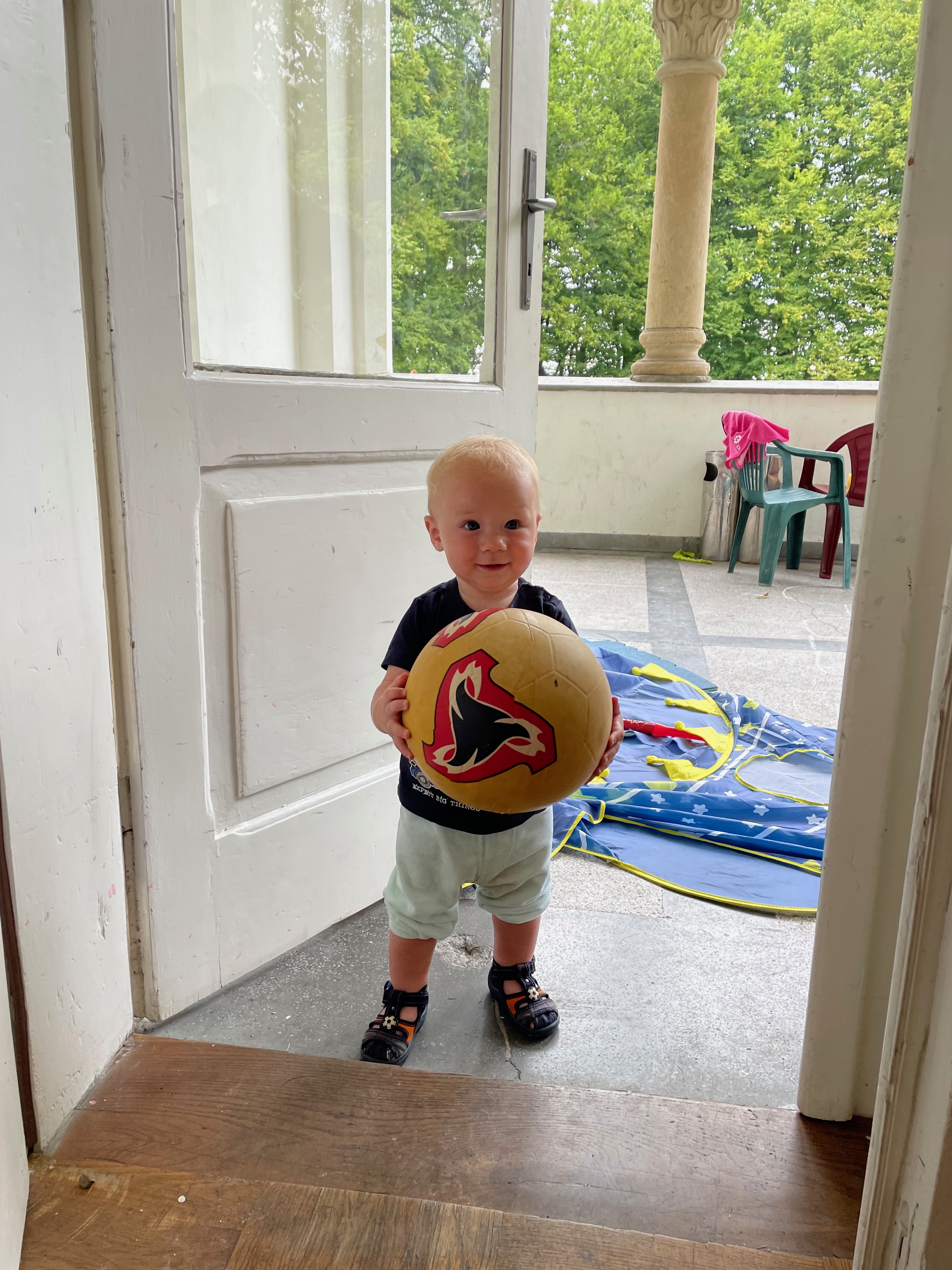 On the other side of the room, Carol and Larry Hyatt played with some of the youngest children. “It’s so hard to imagine what they’re going through,” says Carol, “With their father’s still in Ukraine, the mothers are all alone with the kids.” Koziol said it has been one of the hardest things she has ever seen. “There is so much worry. We are trying to help every way we can. But the war is dragging on and no one knows how long it will be before the families are back together.” Koziol said some of the women are learning the Polish language and beginning to consider finding jobs in Krakow so they can be more independent.

As the afternoon wound down, Pozniak explained why the Jewish community is so driven to assist the Ukrainians. In addition to the notion of repairing the world, Tikkun Olam, she says, “We know the Jewish community is well organized and has the network to find help where it’s needed. We wanted to help non-Jews even though the world once stood silent for us.” She says plans began right from the start. “That first Shabbat we knew we had to do something. We are in the shadow of Auschwitz and couldn’t stay silent.”

At dinner that last night, the group agreed and pledged support for those on the ground who continue to provide aid to those fleeing the war, and at the same time, rebuild a vibrant Jewish

community in Poland. “We have to continue to help,” says Alper, “The need will continue long after the war ends.” 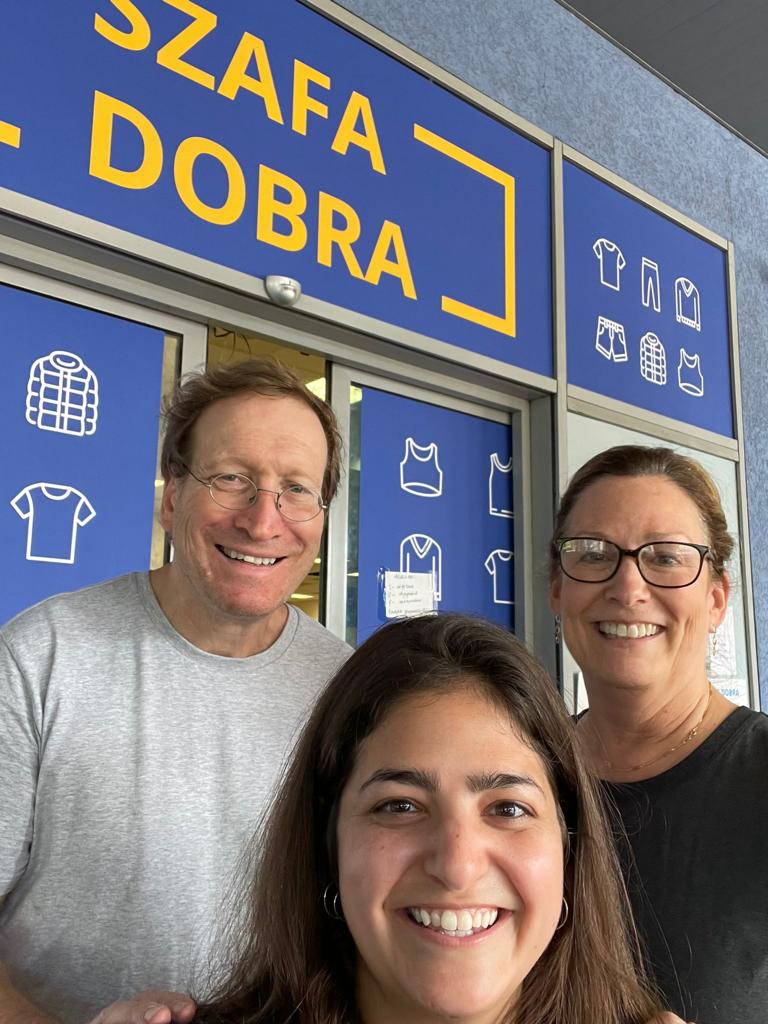 To date, Jewish Federations have raised over $70 million and allocated over $60 million to non-governmental organizations in Ukraine and neighboring countries to support relief efforts. Locally, The Jewish Federation and Jewish Foundation of Nashville and Middle Tennessee has raised over $127,000. To help, visit www.jewishnashville.org/ukraine.