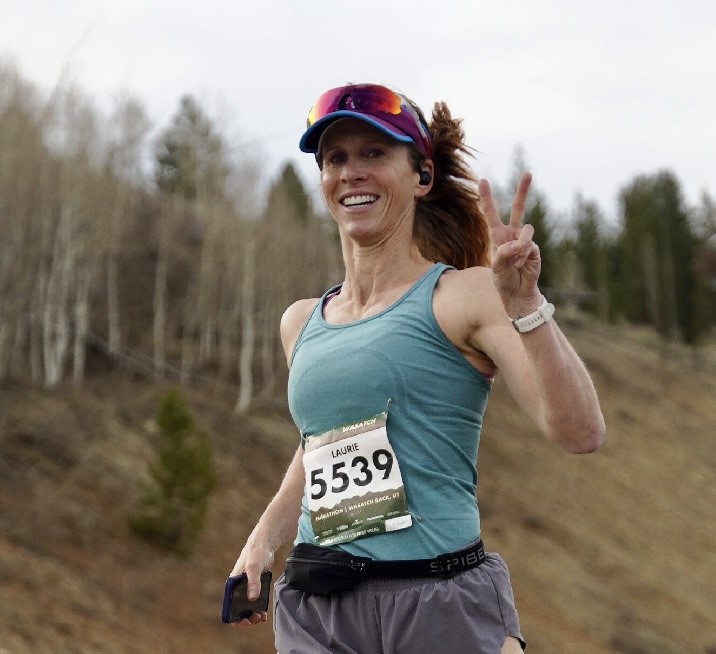 When Rabbi Laurie Rice laces up her running shoes every morning and hits the road, it is as much an expression of spiritual commitment as it is a physical challenge. She began running in college and says that while it has become an addiction of sorts, it also provides her with time for meditative reflection. “I think about the morning prayers, I think about our bodies and that being able to run is not a given,” she says. Over the years Rabbi Rice has run in 15 full marathons and more half marathons than she can count. She most recently ran the Wasatch Marathon last Fall, and after finishing within the time frame to qualify her for the prestigious Boston Marathon, she set her sights on a new goal: to run that elite marathon, and to do it for a higher purpose. “Just to qualify is a badge of honor,” she says, “But I wanted to actually run it. And then I was given the opportunity to be part of a charity team, so it was a perfect way to combine my passion with my Jewish values.”

Rabbi Rice was invited to participate in the marathon by the Heather Abbott Foundation, an organization that raises money to provide prosthetics for amputees. Abbott was a spectator at the Boston Marathon in 2013 and lost her left leg when the second bomb detonated. She persevered through physical and emotional recovery and was the recipient of donations that helped her received a customized prosthesis. Determined to pay it forward, Abbott became a peer counselor for amputees and ultimately created her foundation. Rabbi Rice says she is honored to be part of the Abbott Foundation team. “We are blessed to have these body parts, but prosthetics are so expensive,” she says, “I’m proud to be able to help give that back to people.”

To begin preparing for the Marathon, Rabbi Rice hired a running coach in January, something she has never done before. “It was fun to have a coach,” she says, “It motivated me and kept me accountable.” She also was tasked with raising $8500 for the Foundation, something she qiuckly completed, in fact to date, she has raised over $27,000.

This latest challenge has opened Rabbi Rice up to some new ideas she is bringing to her congregation. “I want to explore how something we enjoy recreationally can inform our values as Jews,” she says. Specifically, she’d like to revamp the Mitzvah Program for the school’s B’nai Mitzvah students. “I want to encourage the students to find something for their projects that combines their passion, what they enjoy, with doing something for others. I think that will help them be more connected to the program.”

As for running, naturally there will be new goals. Rabbi Rice says after the Boston Marathon she wants to challenge herself to run 50 miles for her 50th birthday. It is still a little ways off, and she says she wants to be attentive to her own limits, but when she heads out on her morning run, she is already there.