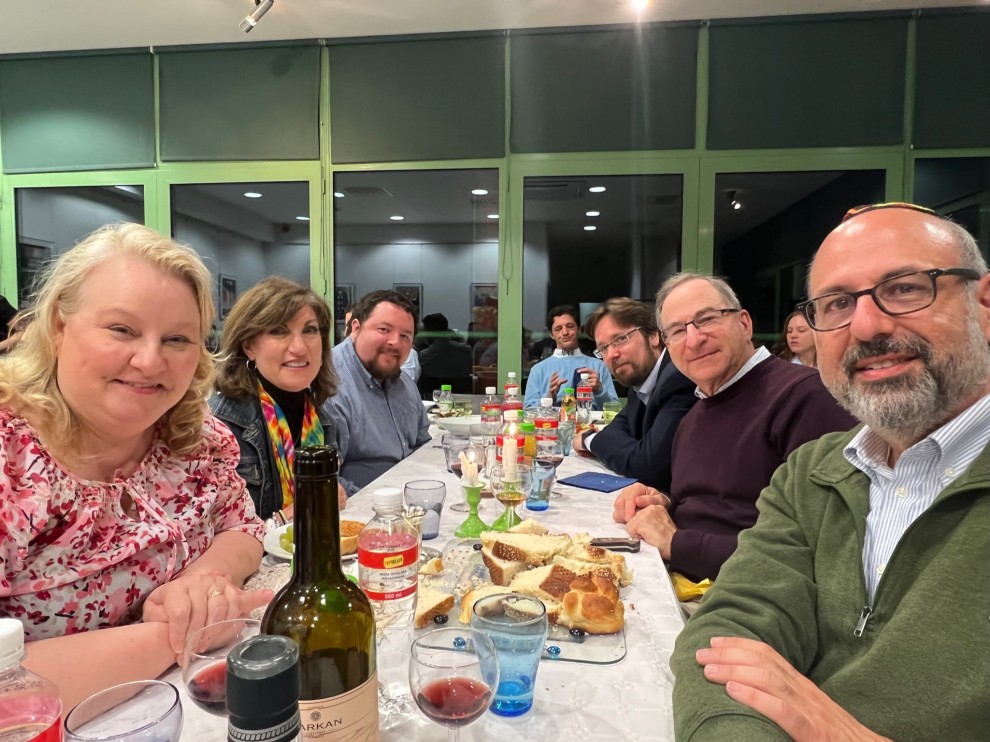 In early May I had the honor of joining a small delegation from Nashville traveling to Poland to witness and assist in relief efforts for Ukrainian refugees. At that time, Poland was assisting over two million refugees fleeing violence and mayhem caused by the unprovoked Russian invasion of Ukraine. The refugees, primarily women, and children fled to Poland to seek safe shelter in a place as close as possible to home since all eligible men ages 18-65 are required to stay in Ukraine to fight. Immediately as the war began in late February, Polish citizens took it upon themselves to drive to the Poland/Ukraine border to take as many refugees as possible to safety. By the time we arrived, international and local Jewish organizations were fully engaged in the work and actively providing safe housing and other essential needs for these refugees, and we had the opportunity to see these efforts in action.

In the days leading to our departure, we put out a call for essential urgently needed items like diapers, hygiene products, and over-the-counter medications. In only three full days of collection, the Nashville Jewish community generously gave over 1500lbs. of donations items. Through a connection with Delta Airlines, we were able to secure permission to bring with us 22 large bags and boxes (roughly 1000 lbs.) of these donated items to give directly to the agencies on the ground assisting refugees. One of these large bags was filled with stuffed animals collected by Akiva students and given directly to refugee children in Krakow, in addition to notes and cards of support collected by students at several congregations and local schools.

There is something particularly engaging, inspiring, and urgent about Ukraine – perhaps because of their brave, young, and media-savvy President and government leaders, perhaps because of the humanitarian crisis the Russian invasion caused by deliberately targeting civilian targets.  Perhaps because of that, we can see ourselves in the faces of the Ukrainians standing strong and proud in defense of their democracy and way of life in the face of Russian aggression designed to force Ukraine to give up on their quest for free and fair elections. As I prepared for the trip, my Ukrainian-inspired nail polish was uniformly welcomed positively by everyone I encountered, even the saleswoman at Michael’s when I went looking for origami paper to bring with us for the children to make butterflies without needing scissors, glue, or markers. She was so upset that she did not have that paper in stock, she went out of her way to give me other options and ideas to share and even wanted to give me money to take to help the refugees.

We arrived first in Warsaw and after gathering all of our donation bags, we loaded the van to head to a meeting with American Joint Distribution Committee (JDC) representatives at an ordinary-looking hotel, literally around the corner from our own hotel. Remarkably, we quickly learned that these JDC staff were refugees themselves, having been displaced from their offices in Kiev to create a satellite operation on this Warsaw hotel. Even before the crisis began officially, JDC staff wisely began the effort to secure hotel rooms to house Jewish refugees fleeing Kiev and other cities in Ukraine. This was only possible because of the ongoing work that JDC has been doing for decades in the former Soviet Union that they could see the writing on the wall and the emergency needs that would be necessary.

In addition to JDC effort, we met with Jewish Agency for Israel (JAFI) staff working to help refugee families wanting to make Aliyah to Israel. The Israeli officials who, prior to this crisis did not have a presence in Warsaw, set up procedures and protocols to process these applications for Aliyah as quickly as possible, moving from an average of 20 applications a day to 200 applications a day. The exhaustion on the faces of the staff was outmatched only by the determination and resolve to do as much as possible as quickly as possible. We met one family who had survived weeks without food or necessary medical attention. They were eventually rescued by JDC staff members who found them and brought them to Warsaw. When we met them, they were in the process of applying for Aliyah to join family in Israel.

After Warsaw, and observing the work of JDC and JAFI, we traveled to Krakow to witness and assist with relief efforts being delivered at the JCC Krakow. In addition to the donated items, the Jewish Federation Board approved $20,000 for the direct service provided at the Krakow JCC for all refugees. In our planning calls before the trip, these staff members prepared us to be surprised that while Krakow, a city of about 800,000 people had committed to accepting over 100,000 refugees, we would not see anyone living on the street or even in tents.  All the refugees, primarily women, and children are being housed and cared for by a combination of efforts by groups like the JCC, private citizens, and Krakow government officials.  It’s amazing what can be accomplished to help people when helping others becomes the focus instead of political grandstanding.

When we arrived at the JCC to meet with director, Jonathan Ornstein and his staff, we passed the long winding line of refugees making their way to the makeshift store created inside the JCC. This store, filled with essential food and supplies, allows refugees the dignity to “shop” for items they choose rather than having to take what they are given.  The store is open from 10-6 pm, seven days a week. The line begins early in the morning and continues throughout the day while the store is open. Even more remarkably, the store is staffed by other Ukrainian refugees wanting to be as useful and helpful as possible in their uncertain and difficult circumstances.  Each one has their own harrowing story of how they managed to escape the mayhem and destruction happening in Ukraine to find safety in Poland. Again, their pain and exhaustion lie just below the surface, but their strength and resolve to return home to a free Ukraine give them the fortitude to persevere.

In our interactions with these families, we heard painful echoes of conversations with friends here in the US who have family in both Ukraine and Russia. Some of these people have stopped engaging with Russian relatives because they refuse to believe the stories they are hearing. The people we met in Poland had fled Russian troops wreaking violent destruction on civilian spaces, homes, schools, and hospitals. When they speak to their family in Russia, they refuse to believe these stories, and can only parrot the Russian propaganda, in which it is illegal to even use the phrase, “Russian invasion.”

It was strange enough for those in the US to have these competing narratives between Ukrainian and Russian family and friends, but it was unimaginable to hear this from the refugees themselves who had personally witnessed and survived the Russian assaults.

Since returning home from our trip, people are universally interested in hearing about it and even more, to know how they can help. First and foremost, we need to remain focused on the situation and send monetary donations to groups serving refugees. The Jewish Federation’s Ukraine donations go solely to direct services for refugees through partners like the American Joint Distribution Committee, Jewish Agency for Israel, and the Krakow Jewish Community Center. We must also encourage our elected officials to continue to provide military and humanitarian assistance on the ground in Ukraine and to support the Ukrainian people and army in defending their country against Russian aggression.

Finally, we must do all we can to protect our own United States democracy and democratic ideals of government by and for the people designed to serve the people, not partisan politicians. The people of Ukraine are suffering not only from the ravages of war but also from propaganda spread by Putin and his cronies which keeps their family members in Russia from understanding and supporting them, instead of denying the reality of the violent aggression. We must put people over politics, and we must protect ourselves from the damaging propaganda designed to keep us attacking each other and which does not serve the actual problems that people face. We must take our obligation as concerned and informed citizens more seriously to protect our democracy which in turn will continue to support the front lines in Ukraine.

During our trip, we toured Auschwitz-Birkenau death camp, a short drive from the center of Krakow where we worked. It is chilling to remember that Hitler was elected by promoting propaganda targeting the most primal fears and most base human instincts. He quickly moved to censor the free press, enact laws to dehumanize Jews and other groups deemed unworthy of the German Aryan ideal, and change the system to allow him to be in power beyond his term. Propaganda based on hate and fear about the Jews and others fed the narrative necessary to enact the Final Solution, which came dangerously close to bringing a full end to Jewish life in Europe.

To support the on-the-ground, do-or-die efforts of Ukraine leaders and military to protect the free world from Putin’s propaganda-filled violence, we must take our responsibility for our democracy far more seriously and deliberately. We must devote ourselves to taking the time and effort to dig beneath the deliberately misleading propaganda promoted on social media, and more frighteningly, by some elected officials. We must demand our elected leaders do everything possible to protect our democratic ideals of free and fair elections, strengthening our access to voting rights and engagement, and follow the rule of law in holding those seeking to damage our elections systems and sow fear and distrust in our system accountable for those actions.

It is our responsibility to educate ourselves and push back against partisan efforts to distract and distort our democratic system. If the Ukrainian people can maintain the courage and resolve to stand up for freedom and democracy while under shelling, bombing, and military attack, certainly, we can muster the courage to fight for our democracy here at home.