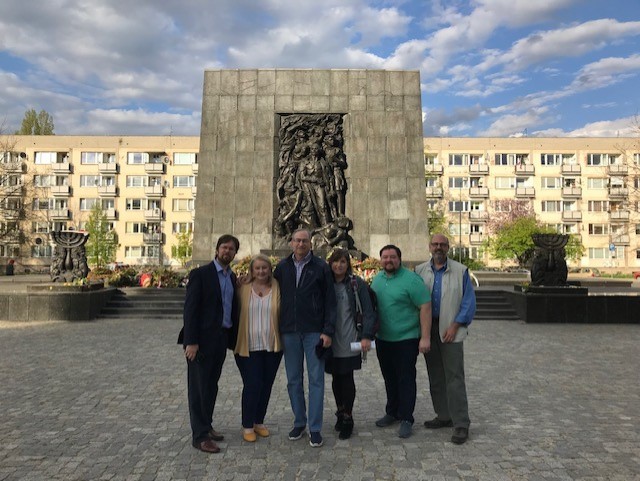 During the week of May 2nd, The Jewish Federation and Jewish Foundation of Nashville and Middle Tennessee sponsored a small delegation to Poland with the purpose of better understanding the refugee situation and providing some assistance to one particular group of Ukrainian refugees. One member of our group, Jacob Kleinrock, documented our progress with daily postings on Instagram. Rabbi Joshua Kullock, of West End Synagogue, also posted some material on Facebook along the way. Being the elder statesman of the group, I elected to do an old-fashioned journal and was able to write up a daily log of activities and observations. What follows is a summary of these journal entries in the form of my observations and lessons learned.  Anyone who is interested in the full text of the journal is welcome to contact me and I will be happy to share.

Let’s be clear from the outset. There was nothing dangerous or heroic about our trip.  Rather, it was the fulfillment of an obligation on behalf of our Nashville Jewish community to understand what is happening with Ukrainian refugees and what assistance could make a difference.

Personally, I had been feeling frustrated following the war news daily and not being able to do anything about it. When the opportunity to make this trip came along, I was grateful to be included. Here are my observations from the trip including some of the things that we learned along the way:

If these two organizations did not exist, it would have been impossible to organize quickly enough to deal with the volume of refugees as well as they have done.

What these people have in common is that they are all refugees themselves, being forced to leave their homes and in some cases their family members behind with no idea about when they might be able to return. Despite this, they choose to work long days on behalf of their fellow Ukrainians to help make their lives more bearable under very challenging conditions. They are demonstrating the same type of determination and bravery that their countrymen in the army show every day in confronting the Russian army.

Perhaps other people from our community will choose to make a trip to Poland to volunteer their time for refugee relief. For any future trips, I would share the following lessons learned:

The experience of this trip has reinforced for me the importance of our Jewish Federation.  Every year, we raise money in our Annual Campaign to support local agencies and overseas partners including JAFI and the JDC. The Federation shines the brightest in times of crisis because of the structures in place that allow rapid response at times like this. Like many of you, I am making a designated gift to support Ukraine relief in addition to the pledge to the campaign that I have already made.

I am grateful for the sponsorship of this trip by the Federation and for the work by Leslie Kirby and Deborah Oleshansky to pull the details together in such a short period of time. To my fellow travelers Jacob Kleinrock, Fred Zimmerman and Rabbi Kullock, it was my pleasure to be a part of the team.