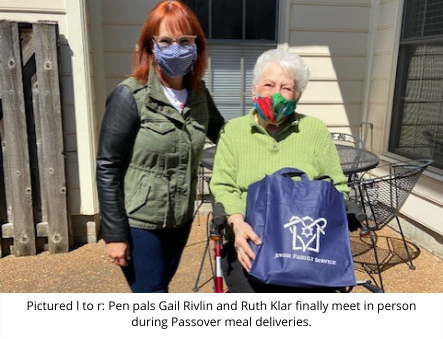 In today’s screen centered world, many people consider letter writing to be merely a quaint throwback to B’nai Mitzvah and wedding and baby shower “thank you,” notes. But during the past year and a half, a revival of the handwritten letter has taken place between local seniors and Jewish Family Service volunteers. Anna Sir, Helping Hands Coordinator for JFS, says the idea for the pen pal program evolved naturally during the early days of March 2020. “At the beginning of the pandemic, volunteers were galvanized to call the older adults who were on JFS’ radar,” she says. The idea to write letters sprung up as a way to reach more people. “This was a fun thing to do because everyone of any age could participate and people just love getting things in the mail.” She says in addition to letters, some people had their children draw pictures and of course, photos were exchanged.

The pandemic meant some seniors went months without seeing their families. But connections were made, and lifelong friendships blossomed through the simple act of writing a letter or card. Gail Rivlin moved to Nashville not long before the pandemic forced everyone to stay at home, so she had little time to make new friends. Also, during that time, Rivlin’s own mother was very ill and ultimately passed away. “When my mom was ill, I wrote to her every day,” says Rivlin. “It was exciting for her to receive my letters, so I was excited to participate in the pen pal program here.”

Rivlin ultimately had four pen pals, one of whom is Ruth Klar. Klar says she was excited by the idea of meeting someone new through letters. “I was not aware of the Pen Pal Program until I was approached via email from JFS. I was definitely open to connecting since I love to write. Not knowing who I would be connected with was exciting.” The two women exchanged letters regularly and developed what each say is a lifelong friendship based on real intimacy. Rivlin says, “There’s not a lot we don’t know about each other. I can’t think of a subject we didn’t talk about.” And Klar agrees, “Gail was great about writing to me all thru the pandemic. Even when she went out of town on vacation or visiting her mom in New Jersey, she always sent me postcards of the places she was. I, in turn, was able to share what I was experiencing and what I was going through. It was very uplifting.”

Of course, there was also a desire for the two letter writing pals to meet in person. As Passover approached, JFS was looking for volunteers to help deliver meals. Rivlin and her husband, Ron, immediately stepped up, with one request: to deliver meals to Gail’s pen pals. Finally, Rivlin and Klar were able to see each other in person, albeit behind masks. “We still had to be socially distant, so we met out on my patio and now the names had faces. What a joy for me,” says Klar. Rivlin also was able to meet her other pen pals, Jean Roseman and Frances and George Hahn.

Although in person events are resuming, the pen pal program is still going strong. JFS’ Anna Sir says she is pleased to offer another option for people to connect. “Helping Hands is a unique program because we live in a small community and don’t need a ‘one size fits all,’ approach. The pen pal program allows us to expand our services to the older population and I think it will always be part of what we offer.” Gail Rivlin says she plans to keep enjoying her new found friends, both in writing and in person. In fact, once the senior lunch program returned to the Gordon JCC, Ruth Klar invited Rivlin to be her guest one Thursday afternoon. “Since Gail has only been here for about a short time, I invited her to be my guest at one of our TGIT luncheons. She was so taken with our senior group that she volunteered to help serve lunch on Thursdays.” Not only that, Klar invited Rivlin to watch her perform in the recent production of the Gordon JCC Mazel Tov Theatre and Rivlin again offered to volunteer by working the front box office. Klar says Rivlin is a great addition to the community, and she is grateful to JFS for bringing a meaningful new friendship into her life.  “A gorgeous young woman who wrote me the most beautiful letters introducing herself, and her lovely family. At first, I wondered why they didn't connect me with my contemporary. I’m so glad they didn’t! Gail has been a joy in my life from her first letter.”