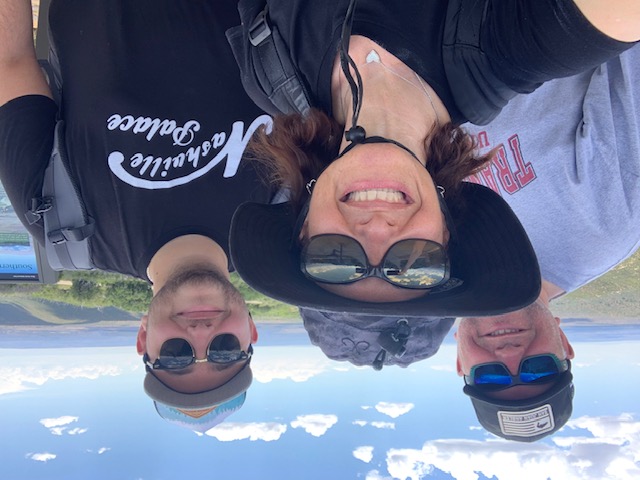 In my work as the Federation's Newcomer Engagement Associate, I meet so many Jews who are moving or want to be moving to Nashville. They come from all sorts of places for all sorts of reasons, and we bring them into Nashville’s Jewish community through our monthly Newcomer Shabbat Dinners, our quarterly Newcomer Welcome Receptions, and by connecting them with community members and organizations who can help them find what they are looking for. One of my favorite parts of this job is getting to hear these newcomers’ dynamic, engaging stories, so we are starting this new monthly feature in the Observer so you can get to know some of them and their stories too. We hope you enjoy reading these and hope you will give every newcomer you meet a smile and a warm Nashville welcome!

This month, we are featuring the Koplin Family. If you see them around town, make sure to say, “Hi,” and let them know you read about her in The Observer.

Tell us your story. Where are you from? How did you end up in Nashville?

Seth and I grew up in Sarasota, Florida, and our families met when we were babies. We grew up in play groups when we were little, as well as attending a temple preschool together. Seth’s father went to rabbinical school but did not practice as a rabbi right away. After Seth’s Bar Mitzvah, Seth’s dad decided he wanted to pursue working as a rabbi. The Koplins then moved to Richmond, Virginia where Seth went to high school and attended college in Kentucky. While Seth and I were in college, The Koplins moved back to Sarasota when a rabbinic position became available. Seth and I had not been in touch at all during those years his family was away from Sarasota.  Seth and I “re-met” each other during our sophomore year of college. To be honest, it was an immediate connection, and we were married four and half years later at my temple, by Seth’s father, on December 30, 1995.

In 1994, after college, Seth and I moved to Nashville because Seth was offered a job at Outback Steakhouse as a kitchen manager. His degree was in Hotel/Restaurant Management, while I am an elementary school teacher. After a stint at Outback, Seth decided that this was not the field that he wanted to pursue. After two and half years in Nashville, we decided that in the summer of 1997, we wanted to raise our future family in Sarasota where both sets of our parents were living.

We went on to have one child who was raised in Sarasota surrounded by family. Our son, Eli, is now 21 years old and is a senior in college in Florida. He will graduate in April and is hoping to attend law school next year.

Over the last several years, Seth and I have been talking about the idea of moving from Florida. Ironically, in November of 2020, a position in the company Seth works for became available in Nashville, and we jumped at the chance to move back! Seth is the managing partner for a commercial flooring company named Bonitz. In January of 2021, Seth moved to Nashville, and I joined him in June of 2021.  I currently teach for Metro Schools at Waverly Belmont Elementary.

This has been a terrific move our family! Our son was on board right away, as he plans to leave Florida after he graduates from his under-graduate work.

What has your Jewish story been like up to this point? How did you get involved with Nashville's Jewish community?

Seth was always raised in a Reform, observant, Jewish home. His family especially celebrated Shabbat every Friday night. As a child, I have very vivid memories of always being at the Keplin’s annual Sukkah party that they hosted!

My parents did not come from very observant Jewish homes. However, when they moved from New York City to Sarasota in the early 1970’s, they became introduced to a Jewish circle of friends who had all also moved from mostly the northeast to Florida, who quickly became their family. My parents wanted to give my brother and me a Jewish home, and they joined the Conservative temple to which their new friends belonged. I had a Jewish education and became a  Bat Mitzvah on the same bima as my brother and then eventually our son Eli! Seth and I were married on this same bima, too!

Since I arrived in Nashville last June, Seth and I have been very busy fixing up our home, getting settled, creating routines, attaining my job, and flying back to Florida every few months. Finally,  in March, we were ready to start meeting people. Seth reached out to the Federation, and they have been wonderful in connecting us with empty nesters who we would have things in common with! We attended a Shabbat dinner for newcomers, and we also recently joined in on a Sunday newcomer gathering as well. These opportunities have been terrific as we have now made many new friends in the Nashville Jewish community.  We are always looking to be introduced to people of a similar age and season of life.

How has your experience been in Nashville so far? Any notable memories or experiences?

We are having so much fun in Nashville! We are BIG Tampa Bay Lightning hockey fans and have enjoyed going to Predators games. We of course also love our Tampa Bay Buccaneers and have also happily attended a few Titans games as well. We are always glad to root for the Predators and the Titans when they are not playing the Lightning or the Bucs!! Seth’s company has tickets for soccer games, and that has been enjoyable as well. Cheekwood has also become a favorite place that we enjoy going to on the weekends.

Our son Eli turned 21 this past January 1st, and three of his friends came to Nashville for a four-day birthday bash! We are thrilled that our son loves it here so much and enjoys coming to visit whenever he has the chance!

We are also thoroughly enjoying the four seasons that Nashville experiences. This was also another factor in our decision to move away from Florida.

What do you love about being Jewish?

We love that whenever we meet other Jewish people, there is an instant connection that just makes us feel comfortable right away. There is a shared background and an ability to connect on many different levels.

We also truly look forward to the Jewish holidays and the traditions that we have been able to pass down to our son. Watching Eli become the president of his Jewish fraternity has been a highlight for Seth and me. We are proud that our son has a strong Jewish identity as well.

What do you love about being Jewish in Nashville?

We love that we are meeting many Jewish people who have lived in Nashville for many decades, and other Jews who have moved here for varying reasons after spending decades elsewhere! It is interesting hearing people’s stories as they are heading into the next chapters of their lives.

We also have cousins in Nashville who we have been able to reconnect with. It is terrific to have some family nearby. Finally, we have also been back in touch with a Jewish couple that we were friendly with when we first lived in Nashville in the mid-nineties. We have picked right back up with them and are enjoying our relationship again after all these years!

So far, Nashville Part 2 has been a success!

What does the next year look like for you? Is there anything that you are still looking to do or experience in Nashville?

Are you kidding? We have only experienced a small fraction of all the awesome things there are to do in Nashville! We have a running list!!!

Seth and I are also looking forward to long weekend road trips to many different places close by. One of the reasons we wanted to move from Florida was the ability to be elsewhere in three hours or so. In Florida, you can drive for so many hours and still be in Florida! We love to travel and see new places and experience different areas.