Creating a family can be a challenging and often expensive experience. For some couples wishing to adopt, the high cost associated with the process is a barrier to fulfilling their dream of parenthood. There is a home study, travel expenses, legal fees, and many other out of pocket costs not covered by medical insurance, which can deplete a couple’s resources. Jewish Family Service of Middle Tennessee has been guiding families through the adoption process for more than 40 years providing resources, support, and financial aid. One significant resource, The Earl Kirshner Adoption Loan Program, provides no interest loans to Jewish couples who are clients of JFS. According to Howard Kirshner, Earl’s son, his father was passionate about supporting the Jewish community and he loved children. “Jewish Family Service was very important to my dad. It makes us very happy to be able to help people create Jewish families and I know my dad would be proud.” And now, JFS is announcing they have a new adoption loan fund, the Abe and Renette Corenswet Adoption Loan Fund, that will provide similar assistance, but is expanding the scope of the fund to those who are not currently clients. Toni Jacobsen, Clinical Director of JFS, says this new fund allows even more people to get the help they need, “The initial purpose of the Kirshner Fund was to help build Jewish families. This fund allows us to really build upon that and be open to any family in the area, not just our clients.” 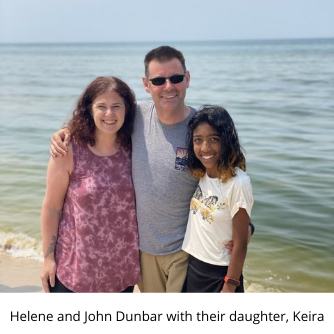 For Helene Dunbar and her husband John, the road to parenthood had many obstacles. They eventually adopted their daughter, Keira, now 12 ½, from Bulgaria. “I don’t want to boil the whole adoption down to finances, but it’s exhausting and there are a lot of unexpected costs.” Helene and John’s journey took them from Nashville to the West Coast, Bulgaria, and back home to Nashville. It included mountains of governmental paperwork from two countries. “We had problems finding an agency to do our home study, but being able to align with JFS was amazing,” says Helene, “The services and professional advice we needed appeared at just the right time.” The Dunbars received a loan from the Kirshner Fund just in the nick of time and provided them with a safety net. “We have such a sense of gratitude for the help we received.”

Building families through adoption is nothing new for the Corenswet family. Haley Attridge, Abe and Renette Corenswet’s granddaughter, says her late father, Robert, and her mother Lucy, fostered over 20 babies between 1997 and 2007, working directly with Miriam’s Promise, a Nashville based adoption agency. In fact, Haley was herself adopted at birth, as was her brother, through the agency. She remembers fondly the many babies who spent weeks, and sometimes months, in her home. “I loved it. It was so fun to have the babies in our house.” Over the years, Haley says her mother met, and continues to keep in touch with, many of the adoptive families. “The first baby stayed several months with us,” she says, “My parents stayed in close contact with the family and became the baby’s God-parents.”

The Corenswet Adoption Loan program provides no interest loans to families needing assistance, with the requirement that the loans are paid within three years. According to Pam Kelner, Executive Director of Jewish Family Service of Middle Tennessee, the idea is to continually replenish the fund in perpetuity. “Loans like this might be just what a family needs to help them move forward in their goal of adopting,” she says. The fund came as a bit of a surprise to Kelner, who received word after Renette passed away last summer. “Agencies often don’t know about these types of bequests until after someone has passed. We are so happy to be able to connect with the Corenswet family and would have loved to have been able to show our gratitude to Renette in her lifetime.” Kelner says the Life & Legacy program, which was created several years ago to help communities develop legacy giving, now allows agencies to show appreciation to donors during their lives, and perhaps even encourages others to consider their own legacy planning. Haley Attridge says the Abe and Renette Corenswet Adoption Loan Fund is an example of her grandmother’s welcoming nature, and her ability for growth. “My grandmother was influenced by watching the many babies who came through our house of all races and ethnicities. I saw her evolve and find ways to learn and expand on what she already knew.”

For information about adoption services, or to apply for a loan, contact Toni Jacobsen at tonijacobsen@jfsnashville.org