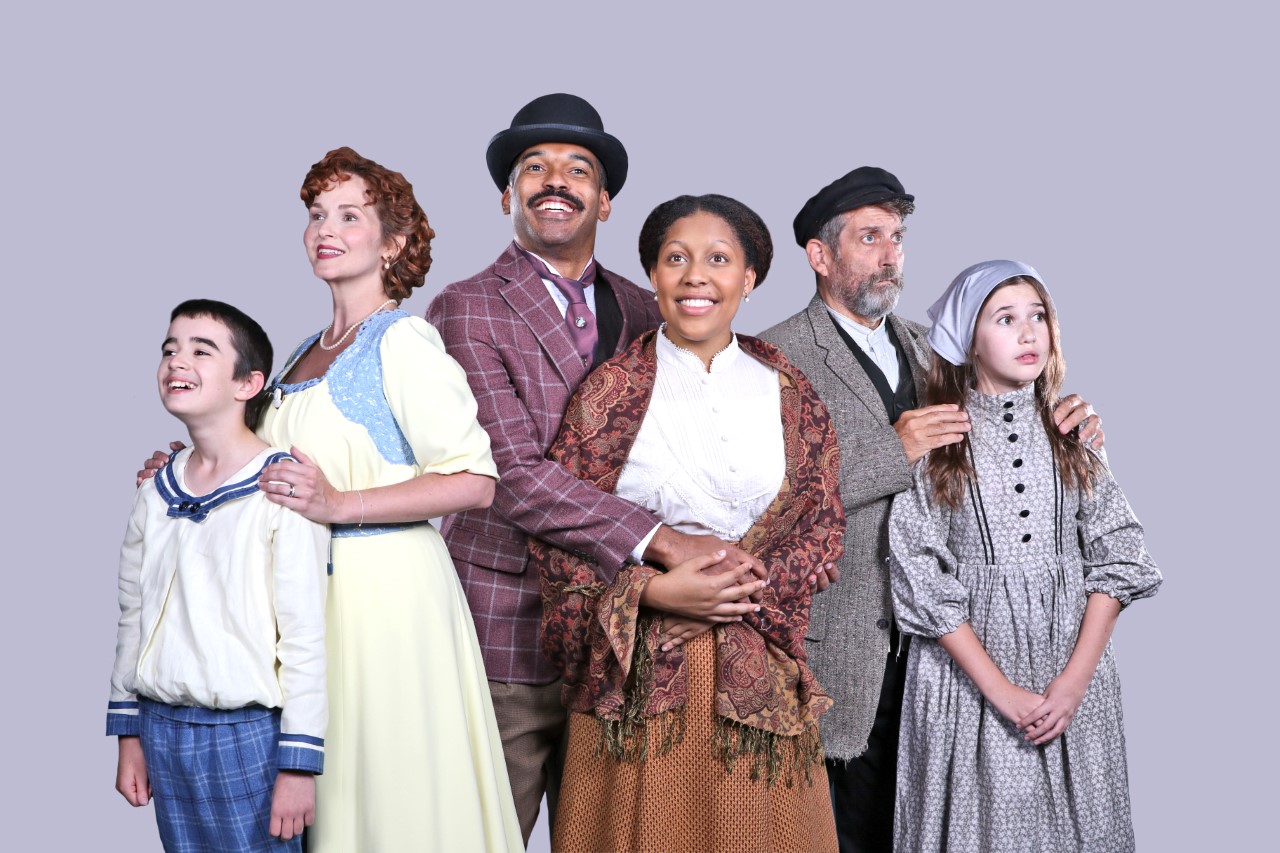 After a long, dark year and a half, Nashville Repertory Theatre is back with a production of Ragtime, the period musical that weaves the stories of three groups during the early 20th century: Jewish immigrants, Black Americans, and white upper-class suburbanites. And while the show is set nearly 100 years ago, and had its debut 25 years ago, the themes of antisemitism, racism and women’s rights resonate across the decades. In mounting the show, Producer/Director Micah-Shane Brewer paid attention not only to history, but also to events that unfolded over the last few years. “A lot has happened over the last three to four years in this country, particularly around immigrants’ rights and police brutality,” he says, “This show explores American identity and still speaks to people where they are today.”

As the story begins, the audience is introduced to a white family from New Rochelle, New York,   Harlem pianist Coalhouse Walker, Jr., and Tateh, a Jewish artist from Latvia living with his young daughter on the Lower East Side. The story is also narrated by famous historical figures like Booker T. Washington, Harry Houdini, Henry Ford, and Emma Goldman. Galen Crawley plays the role of narrator Evelyn Nesbit. The actress and model was among the first to be photographed for mass circulation magazines, her sordid personal life playing out in the pages for public consumption. Crawley, who was raised Jewish in suburban Atlanta, says her own family history mirrors that of Tateh, the Jewish immigrant from Latvia. She first performed in Ragtime during her high school years, and says her perspective today is much different. “In high school, the cast was mostly kids of privilege. Doing the show today, so many things feel more relevant. What’s really being told is the story of what it’s like to be non-white in America.”

Coming on the heels of the past few turbulent years, Ragtime’s exploration into police brutality and anti-immigrant prejudice questions whether the country has really progressed over the last century. Brewer says his challenge to the actors was to make the characters relevant and to avoid this production showing like a museum piece. Nashville Native Justin Boyd who plays the role of Coalhouse Walker, Jr. says it is hard not to feel hopeless while looking back through the generations. “History continues to repeat itself and right now it seems we haven’t progressed very far. This past year, more people are showing their true colors. Coalhouse’s story makes you want to root for him, but unfortunately, that’s a little unrealistic.”

Boyd credits the music as being the real soul of the show. “It is the central focus of every single story.” Music director Dave Ragland says it was enlightening visiting the pre-pandemic world of the show and blending it with the current post-COVID sensibility. “Revisiting the score now I became even more aware of how [playwright] Terrence McNally fleshed out the characters and how they meet and have to co-exist,” he says, “Many are so tragic, and for people living in the 21st century world, so much is tragic.” He says the challenges of today remain intertwined with those of the period of the show. “The right to raise a family, to make a living, overt and covert classism, poverty, and illness. These are still challenges.”

In addition to exploring racism and prejudice, the show looks at the role of women during the period which, according to Galen Crawley, also rings surprisingly true today. In her portrayal of Evelyn Nesbit, she had only to look at recent news headlines for inspiration. “I’ve been thinking about Britney Spears and what she’s been through is basically a re-tread of what happened to Evelyn,” she says. Nesbit was handed over by her mother as a young teen to a wealthy business man three times her age who rapes her and forces her to act as his consort. Eventually young Evelyn became involved in a deadly love triangle and the resulting case was dubbed, “The Trial of the Century.” And Crawley says today, Evelyn’s notoriety, much like Spears’, would be further amplified by social media. “Social media has democratized who gets to be in the spotlight. It’s stressful, but on the other hand, we’re hearing stories of people who 20 years ago didn’t have a voice. So, on the positive side, social media is providing that forum for the underserved.” Crawley calls Ragtime and epic show that understands the social issues it explores.

Throughout its history, Ragtime has received mixed reviews for its storytelling. But the lavish production almost always overshadows any script inconsistencies. In this production, Producer Micah-Shane Brewer also charged the design team to use the story’s history as commentary on current events. Costume designer Lori Gann-Smith says she learned a lot about the experiences of Jewish immigrants at the turn of the last century. “I realized our history has been very white washed. In the play, it’s well documented that America has never lived up to its promise to enfold everyone and protect everyone,” she says. Particularly significant to her was the story of Tateh. “I’d never considered or imagined what that experience was like. He has nothing to lose when he comes to this country. His story explained why we had waves of immigration.”

Although the stories told in the show are filled with tragedy, violence, and struggle, at its core, it is a musical, and while it does not solve the problems it explores, it offers a bittersweet ending and hope. Justin Boyd says the diversity of the characters shows change is possible, “The beauty of the show itself is that everyone is from different walks of life, and they all eventually come together.” And Micah Shane-Brewer says, “At the end of the day, it’s up to us to make this chapter of our history right. It’ not about the next generation, it’s up to us, now.”