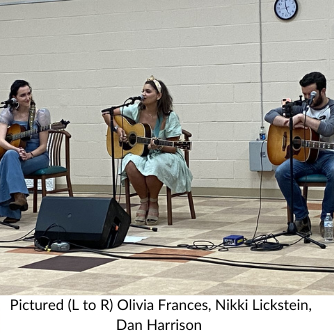 Live music is back! The pandemic halted so many aspects of everyone’s “normal” daily lives for over a year, including venturing out to experience Nashville’s live music scene. Music is the heartbeat of Nashville and we often take for granted the access we have to incredible talent in this city. We were finally able to host the long-awaited inaugural in-person Music City Mazel on July 11. Music City Mazel was created over a year and a half ago, but the original event was  cancelled due to Covid. Merrill Miller, Natalie Steinberg and I, with the support of NowGen and The Jewish Federation and Jewish Foundation of Nashville and Middle Tennessee, wanted to create a Writer’s Round, featuring professional Nashville-based artists and musicians, who happen to identify as Jewish. More often than not, these artists are on stage or in songwriting sessions with other peers and industry professionals who have strong religious undertones, as Christian themes are deeply rooted in Country Music. Some even create stage names to make their “Jewish-sounding” legal names fit the culture. We are proud to introduce a new Writers Round which provides a sense of community and gives exposure to Jewish talent.

The event on July 11 featured five local musicians who showcased their beautiful vocals, mesmerizing guitar strums, and captivating lyrics. These artists included Layla Frankel, Hera Lynn, Dan Harrison, Olivia Frances and Nikki Lickstein. We also had the opportunity to include international country star, Omer Netzer, all the way from Israel, who blew the crowd away with his twang and rasp. Omer also opened the event with a mesmerizing tribute to the antisemitism marches happening that day in Washington DC.

I am thrilled to have Music City Mazel become a reoccurring series and to highlight the Jewish artists of Nashville. We hope to see you at the next one!