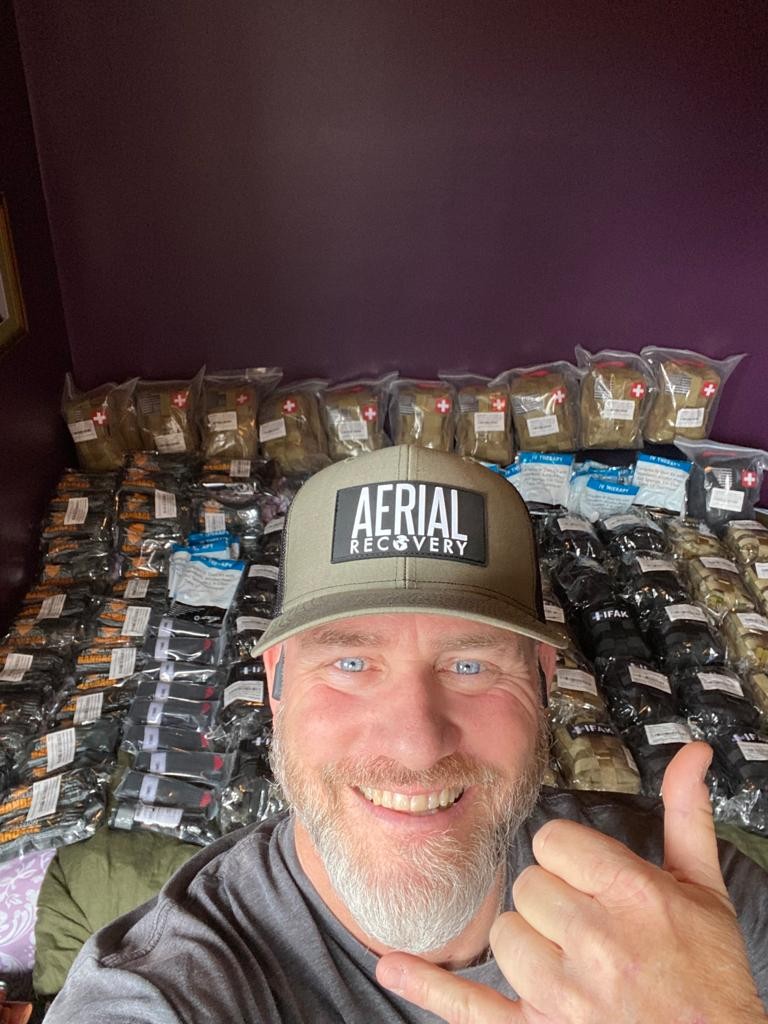 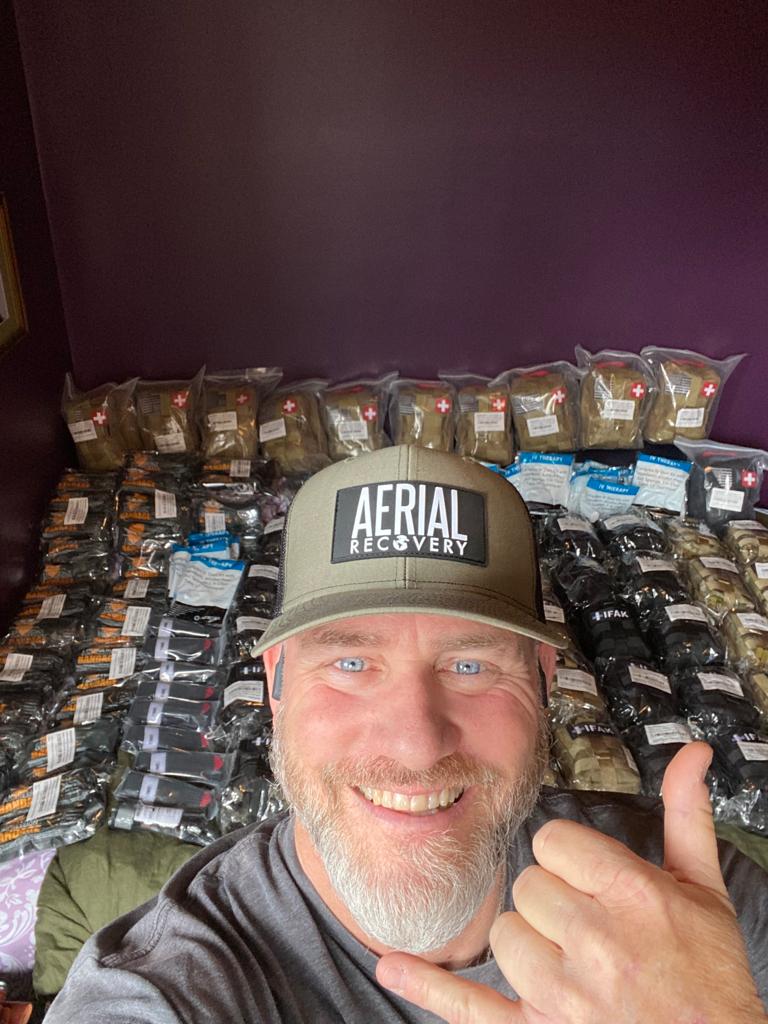 Dov Gelman is pictured with aid packages for Ukrainian children.

As war rages on in Ukraine, volunteers rush to aid some of the most vulnerable, children in the foster care system. Dov Gelman is the founder of My Brother’s Keeper International (MBKI), a humanitarian aid organization that works to improve the lives of children living in poverty and conflict zones, primarily in Israel. But when the war began in Ukraine, he worried about those children who have no parents to protect them. “I always hated the Ukrainians because my family was murdered by the Nazis,” he says, “But when this started, I thought about the children and the mothers.” Gelman tapped into contacts he made while assisting with relief and recovery efforts following last winter’s tornadoes in Kentucky. It was there he met Jeremy Locke, CEO of Aerial Recovery Group, a Nashville-based organization that coordinates rescue and recovery work around the world. “I contacted Jeremy and offered to be a child welfare volunteer with them.”

To begin his preparation, Gelman sent messages to friends from high school and made online requests for funds to help in the effort. “It was amazing,” he says, “I received tens of thousands of dollars for medical supplies and trauma kits.” In early March, he packed up his duffel bag with supplies and headed to Warsaw to meet up with Locke and his team to prepare to cross the border into Ukraine. In those early days, there was much confusion about how best to protect the children, many of whom were living in group homes, and their caregivers. Jeremy Locke says the biggest risk was keeping the children out of the hands of human traffickers. “We were contacted by people wanting to evacuate the children to Hungary and other European countries,” he says, “But we needed to make sure there was documentation on each child, so the Ukrainian government knew where they were going.” Locke, a retired Green Beret himself, says the team used the Green Beret model to create best practices. “We work with local government, law enforcement, and child protective services to help move the children to the safest places within the country.” Once the children arrive in Western Ukraine, local child welfare services take over their care. 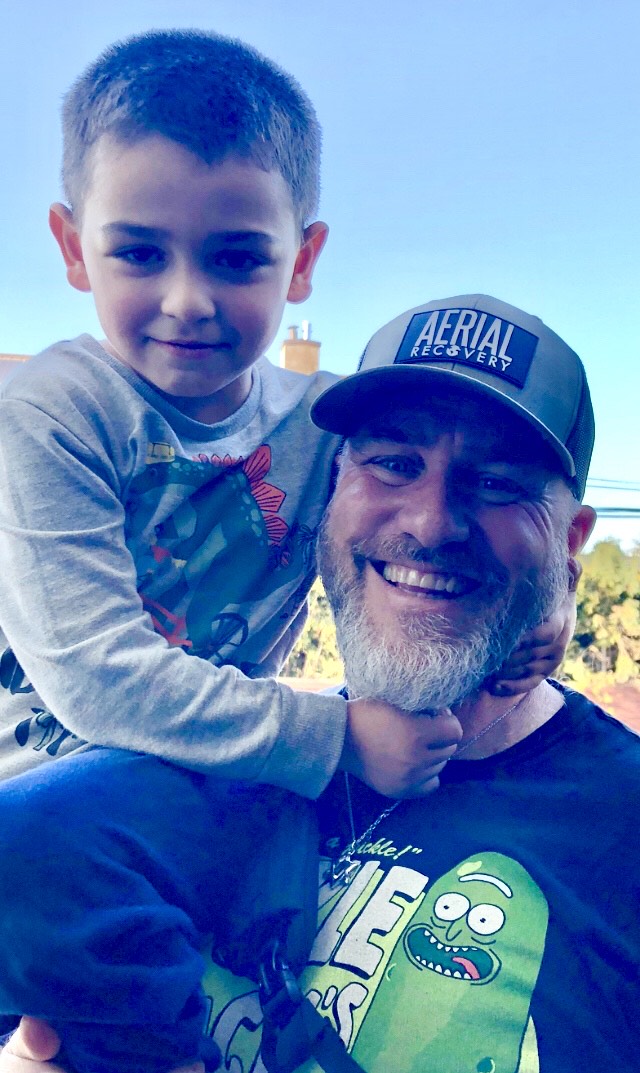 The rescue mission was not without risks. Locke says at the beginning of the war, over 2,000 troops surrounded Ukraine. And it was not long before invading Russian troops began targeting areas where the children were staying. Locke says, “The Russians targeted areas where the orphanages and group homes were, in regions with no evacuation orders.” His team set up a command center in Lviv and began working with Ukrainian nonprofit groups doing rescues.

Gelman says the scene was chaotic, “There was near-total destruction in the urban areas where the children were.” Working with approximately 100 Ukrainians, and 10 people from the United States, the group made its way into the Russian-occupied areas. Locke says the journey from the command center to the rescue site and back takes 20 hours each way. “During that first mission, we drove through Kyiv and rescued four kids and two mothers. They were traumatized. But as we drove, you could see the physical strain and stress melt away.” 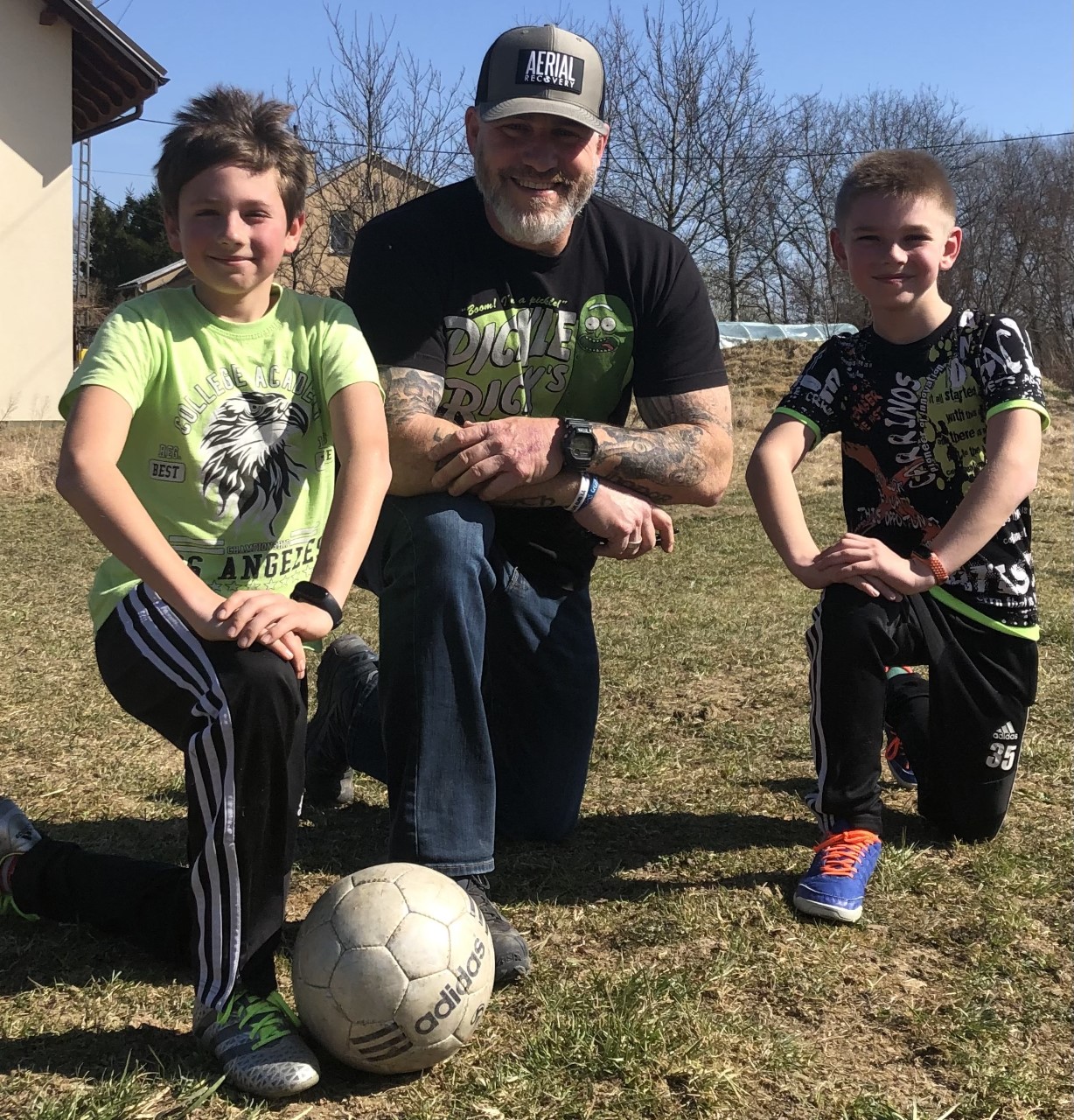 Since that first rescue mission, thousands of children and caregivers have been rescued from danger zones in the East and relocated to safe houses in the West. Gelman says volunteers secured Airbnb apartments, while others dealt with the many medical, physical, and emotional needs of the children. To oversee the welfare of the children, the team partners with New Horizons for children, a faith-based group that helps provide care for vulnerable children around the world. Dr. Sherri McClurg is the CEO of New Horizons. She has been traveling back and forth to Ukraine throughout the war. She says in the beginning it was easier to move the children to camp locations, but it became increasingly difficult. “The ones evacuated early had no problem. But once war broke out, it was awful. The first week or two at the border, there was a lot of human trafficking,” she says, “It was then that Jeremy and I decided it was much safer to keep the kids in the country.” She says it was necessary for the Ukrainian government to take custody of the kids to better provide for their care, and to protect them from being trafficked. She says many of the kids have special medical needs. McClurg says another benefit to being in the West is its proximity to the Polish border. “It takes so long to get from the East to the West, this way, if we need to evacuate further, we’re closer to the border and can get there in an hour,” she says. Another important role for McClurg and her team is assessing and helping to support the children’s’ emotional needs. “Some of these kids have seen caregivers shot and killed. Anything we can do to calm the chaos we want to do.”

McClurg says the difference between the East and West in Ukraine is stark. “In the daytime in Lviv, it’s business as usual. People are walking their dogs, stores and businesses are open. But at night, the sirens go off, and it’s very stressful.” McClurg credits Locke and his team, including Gelman, with being able to help the country’s most vulnerable citizens. “We, as Americans, need to step outside of our culture and see what they need,” she says. That need, she says, is not supplied. “There is no shortage of supplies. In fact, unlike in the United States, there is plenty of formula and milk for babies. The biggest issue is access to supplies. The best thing people can do is send dollars to the NGOs that are on the ground.”

Dov Gelman says this experience opened his eyes to the idea of changing the mission of MBKI. In addition to its range of aid to underserved groups in Israel, the organization has added regular, ongoing relief efforts for Ukrainian refugees, both Jewish and non-Jewish, through Chabad of Warsaw. “We are helping with housing, food, education, and relocation to Israel for Jewish refugees who wish to go,” he says, “We are also helping to subsidize summer camp in Warsaw.” Gelman plans another mission this month. The journey will take him to Warsaw, to Lviv, and finally, to Israel where he will be continuing his work there.

For information about how you can help with monetary donations, visit The Jewish Federation and Jewish Foundation of Nashville and Middle Tennessee, at www.jewishnashville.org/ukraine. For My Brothers Keeper International, visit www.mbki.org. 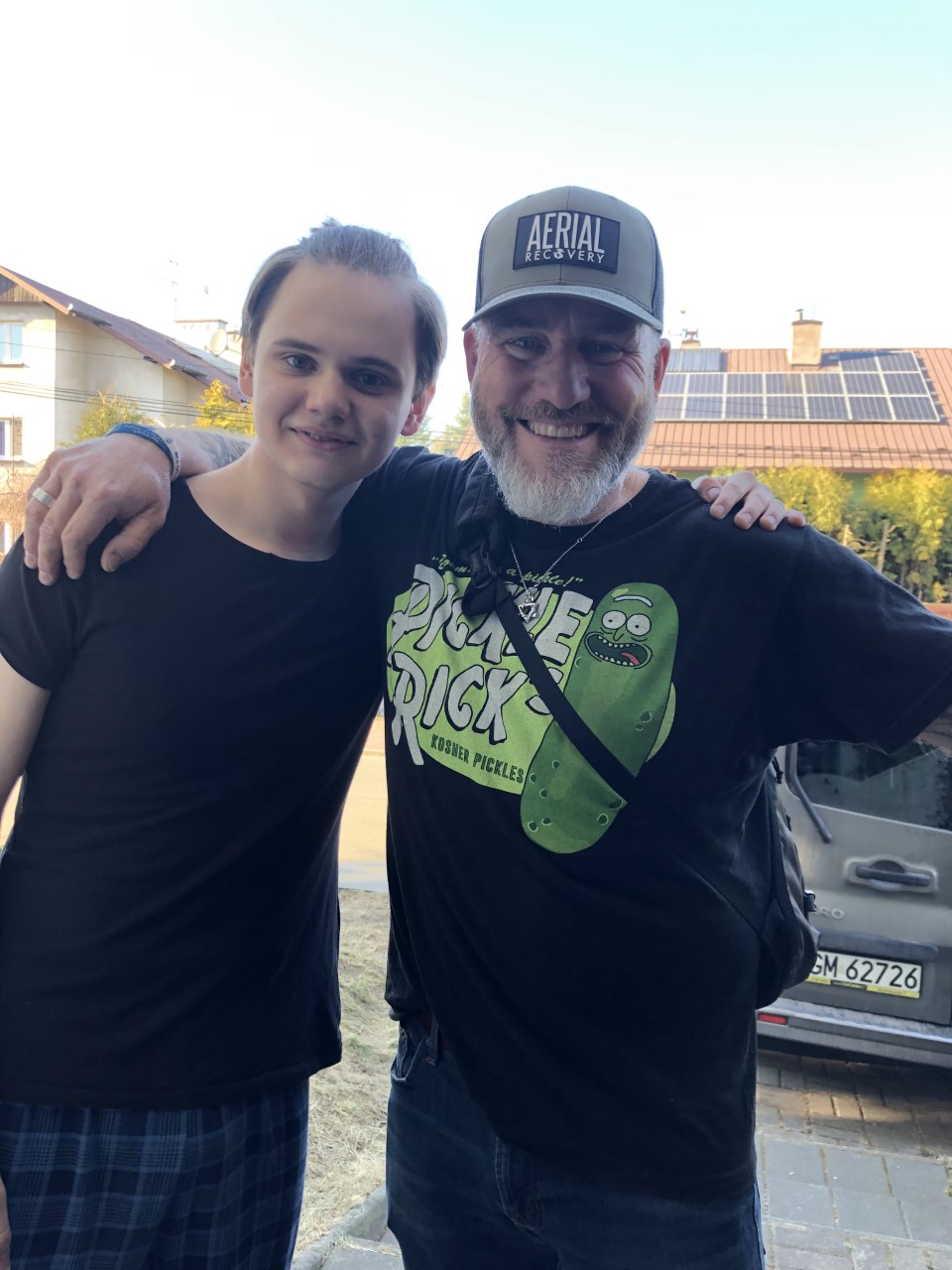 Dov and Edward who, with his mom, plans to immigrate to the U.S.