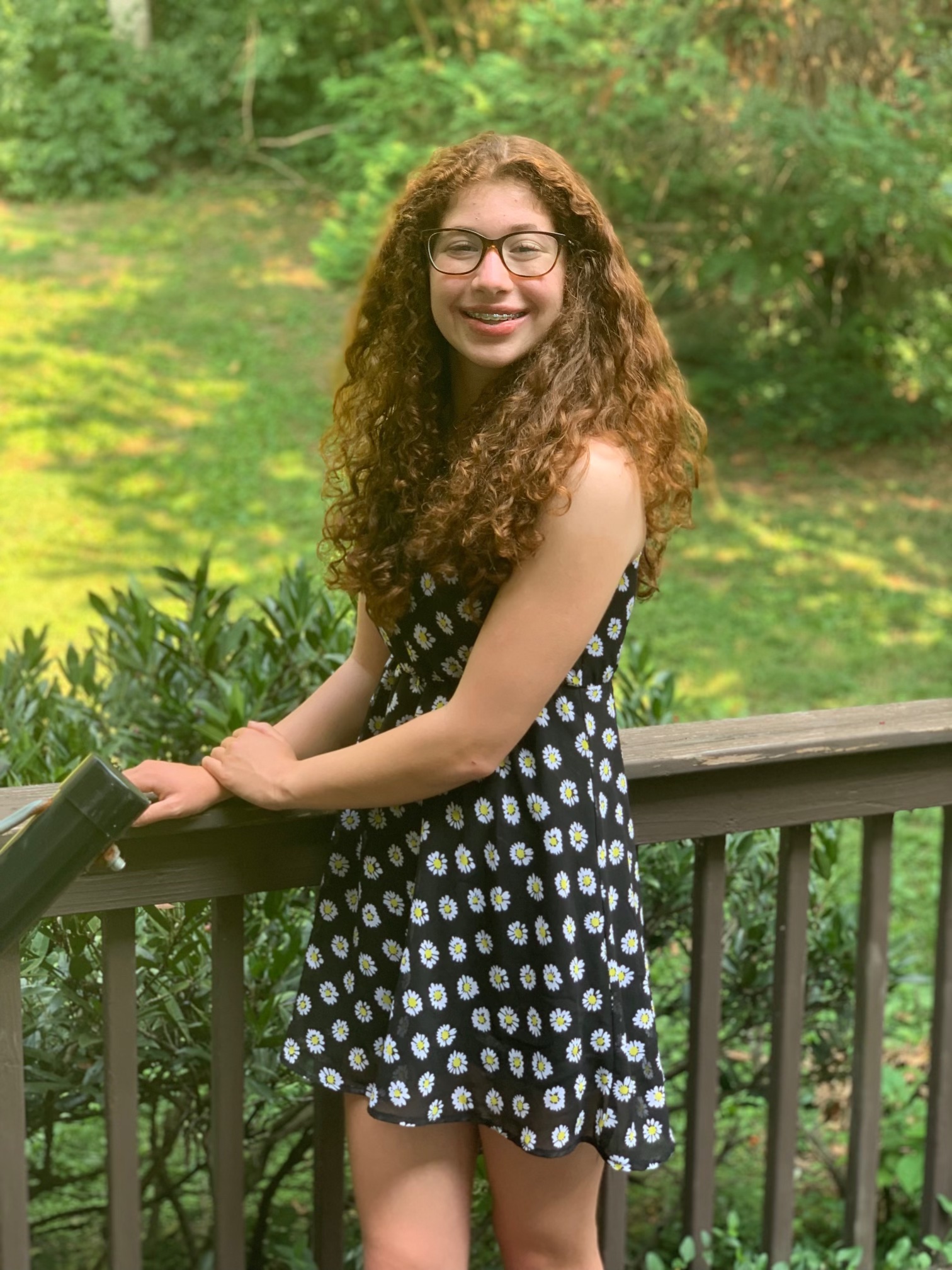 Emmie Wolf-Dubin explains that it was a local rally that inspired and transformed her thinking about the Holocaust and its connection to Israel. And it was the life of survivor Mira Kimmelman, whose strength and optimism drove her to dedicate her life to the Jewish communities in Tennessee, that provided Emmie with a link between a country she has never visited and the commitment to never forget the horrors of the Shoah. Emmie recounts these life-changing events and why she feels uniquely connected to victims of terror in her winning essay in the 2021 Mira Kimmelman “Learning from the Holocaust” Essay Contest, sponsored by the Tennessee Holocaust Commission.  “The piece was very empowering to write,” she says, “I am honored to give Mira Kimmelman a voice and to write about the recent conflict in Israel even though I am not there.”

Emmie is an eighth grader at Meigs Middle School and a student at West End Synagogue’s Beit Miriam Religious School. She previously was awarded a gold and silver key in the Tennessee region’s Scholastic Writing competition, and she won first place in Bookshop Santa Cruz’s 2020 Young Writer’s Contest. Her winning story, Countdown, was published in their anthology. She says her 5th grade literacy teacher, Christopher Martin, has been instrumental in her progress as a writer. “He is one of the best teachers I’ve ever had and actually is the one who told me about the Kimmelman essay contest.”

Emmie’s parents are both heavily involved in Jewish communal life and credits them with keeping her informed about Israeli politics. “My parents challenge me, we debate things and I’m encouraged to have my own opinions,” she says. Her dad, Ari Dubin, is Executive Director of Vanderbilt Hillel, and her mother, Abbie Wolf, previously served as The Federation’s Director of the Jewish Community Relations Committee. In addition to her writing, Emmie is active in sports, playing basketball and running track and she spent this past summer scuba diving at Camp Ramah in Northern California.

Almost 98 years ago in a town in Poland called Gdansk, Mira Kimmelman was born. As a young adult, she would be imprisoned in the deadliest concentration camp called Auschwitz and was forced into the nearly unimaginable march to Bergen-Belsen. Yet, after all of these horrors at the hands of one of the most evil men in recorded history, she still preached lovingkindness in a world that seemed apathetic to her plight. Instead of focusing on that, she zeroed in on the people who helped. The people of all nationalities, races, and religions who saved her and her counterparts across Europe.

Mrs. Kimmelman, who passed away in 2019, endured what was easily the worst bloodshed and religious persecution in recent history. The Holocaust. Ever since I was young, I have mourned on Holocaust Remembrance Day, or Yom Hashoah. And ever since I was young, I have celebrated on Israeli Independence Day, or Yom Ha’atzmaut. I mourned and celebrated before I even knew what either term meant; before I knew what the Holocaust or what Israel was.

But as my years grew, I learned that Hashoah is the Hebrew word for The Destruction. And The Destruction is that 6 million Jews lost their lives. Countless more were displaced, forced into internment camps, or lost someone that they held dear.

When I reflected on Mira Kimmelman’s life and works, I saw that one of her core tenets was the saying, Never forget. Never again. Every Jew I know and have met knows this saying; feels it. But I’ve found myself wondering how a survivor of this genocide could have maintained such optimism.

In reading Echoes from the Holocaust, I stumbled upon a quote from Mrs. Kimmelman which read, "If future generations fail to protect the truth, it vanishes…Only by remembering the bitter lesson of Hitler’s legacy can we hope it will never be repeated. Teach it, tell it, read it."

This represents the message that the Holocaust must never be forgotten; that it’s our job to make sure it never will.

After this war of fire and death, the country of Israel was born again as a home for Jews across the world. So many people, including Kimmelman’s father, Moritz, made aliyah after the war. This proves with a note of finality that Israel, at the very least, provides comfort for survivors and Jews worldwide.

As I’m writing this, I sit beneath the stars, swinging on a swing set late at night. I’ve just come from a rally at the synagogue Sherith Israel talking about the recent bombings and violence in Jerusalem, Lod, the Gaza strip, Tel Aviv and pretty much everywhere else in Israel. There, the rabbi sang songs that made my heart swell at the feeling of togetherness. We heard the cantor speak about his experience in Israel before, during, and right after the six-day war. We heard an Israeli living in Nashville talk about his sister currently taking shelter under a stairwell and her conversations with her three- and seven-year-old neighbors who were debating over whether or not it was in fact bombs or fireworks sounding all around them. And then I heard another rabbi speak about how we - the universal ‘we’ - have to be the ones who care about these people. He continued to say the rest of the world has proven that when we, Jews, are slaughtered by the millions, they are more than willing to turn a blind eye so long as they can continue in their blissful ignorance.

Nonetheless, I have never felt more connected to this land that I’ve never even set foot in and that was born from the blood and sweat and tears and determination of my ancestors. I have never felt more connected to my family - even if that family is people that I have never and probably will never meet. Afterwards, I called my grandmother, a rabbi, to reflect on this life-changing experience that is still flashing in my eyes. Upon hearing my recount, she told me eleven words that I am certain I will remember through my life: “It’s not about where you are, it’s about who you are.”

Lastly, I have pondered the words of the rabbi who spoke of the world turning away from our suffering and I’m reminded that he challenged us to think not only of the Israelis and their suffering, but the Palestinians' as well. With these words, I was reminded of Kimmelman’s message of seeing the kindness in all people. I was forced to come to the realization that we are not alone. In our suffering, in our joy, and in our liberation. As Kimmelman expresses in her memoir, people still manage to listen to their hearts regardless of who they are, where they are from, or what they look like. And that might be one of the most powerful things we all will have to come to terms with.

Now I know. And I will never forget.