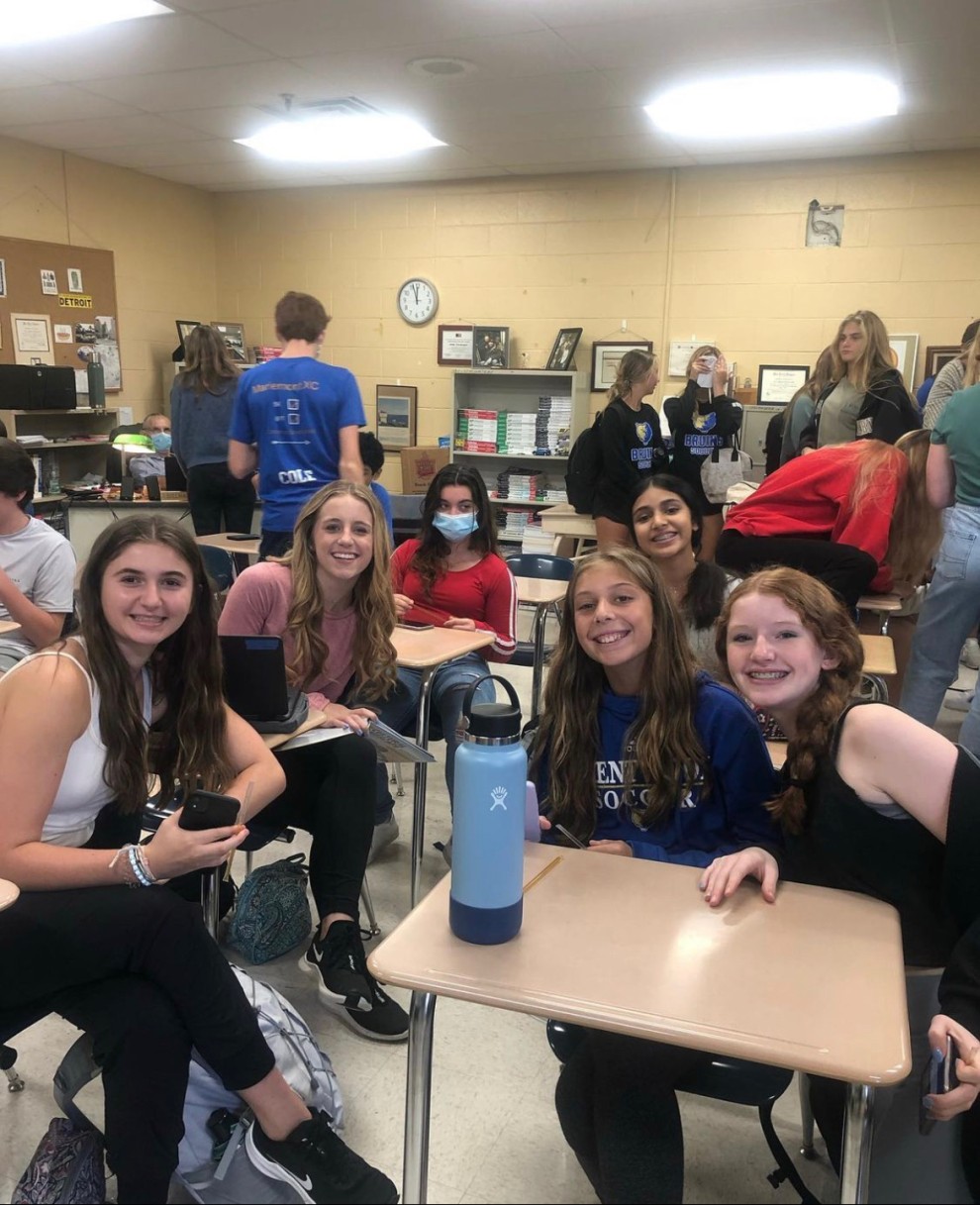 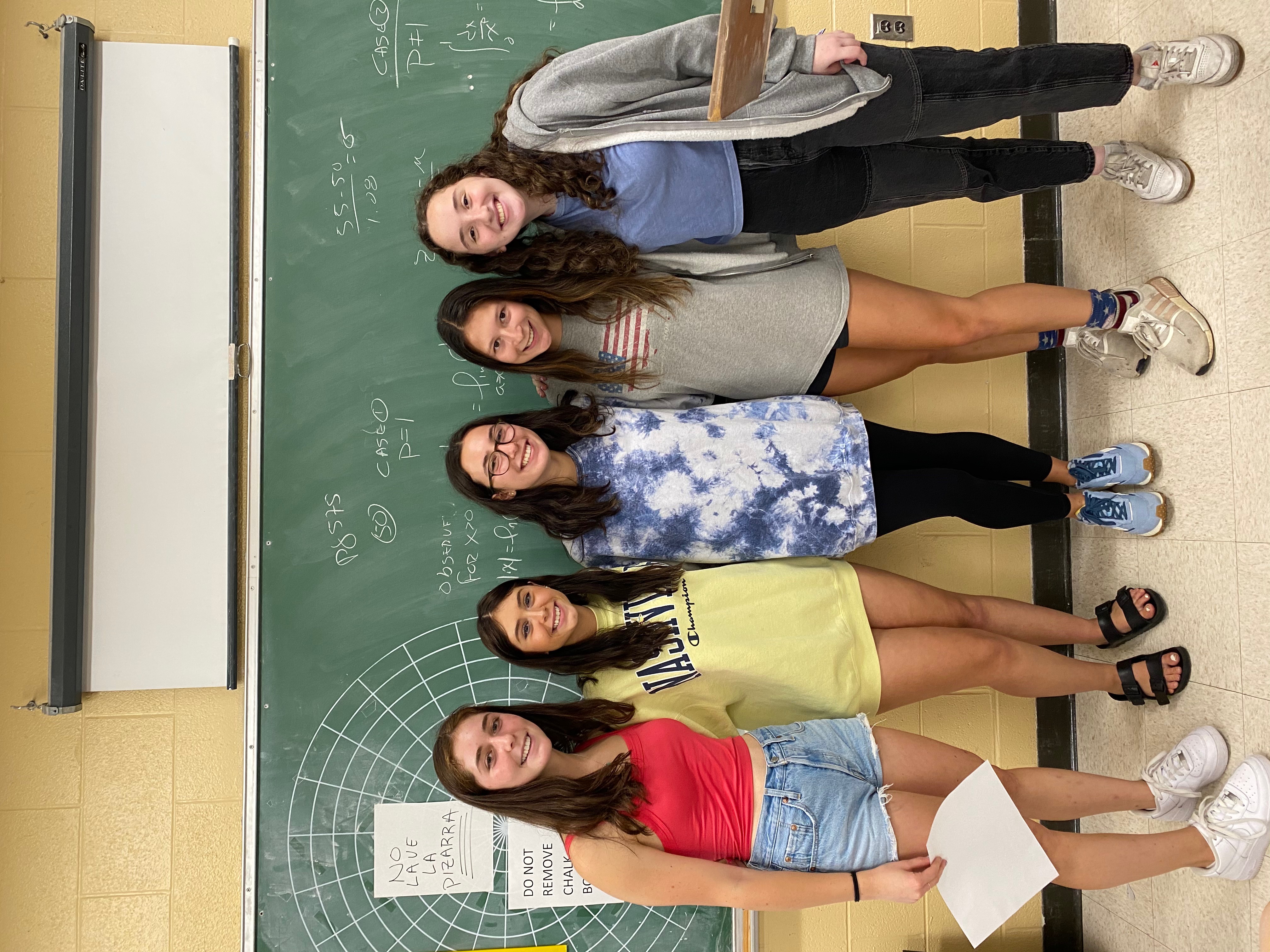 Gabby Sandberg relocated to Middle Tennessee with her family from California just after the COVID19 pandemic began. She is a senior at Brentwood High School and soon after starting school, began noticing antisemitic behaviors among her classmates. “I was excited to make the move, but I did start experiencing antisemitism,” she says. She describes subtle comments, jokes, and not so subtle things, such as someone drawing a swastika. She tried to rationalize these incidents in her mind as coming from a place of ignorance. As she shared it with her family, she realized it was time to do something. “My family discussed it and I just couldn’t normalize it anymore.” She had been Vice-President of the Jewish Club at her school in California and decided to create a similar club at Brentwood. After asking a lacrosse teammate if she knew anyone who might be interested, she connected with a few other Jewish students, and they started planning. The club kicked off during the Fall semester with about 30 students in attendance, and most recently, 60 students showed up. According to Gabby, 80% of those are not Jewish. “Our goal is to teach people about Judaism so they can better understand what it’s all about and what our traditions and practices are,” she says.

Gabby was joined in leading the fledgling Jewish Club by Kayla Liebeskind, Mya Schwartz and Morgan Kornblit, all seniors. Kayla, who also moved to Brentwood last year from her native New York, agrees with Gabby that the culture is very different from what she was used to. “People are basically curious about Judaism. I like being able to tell friends about it, but there’s a lot of forcing Christianity on me,” she says. Mya says during middle school, a classmate signed her yearbook with a swastika in red pen. And Morgan says she’s been asked to describe the difference between Jewish people and “normal,” people. All believe education is the key to building better understanding about Judaism. 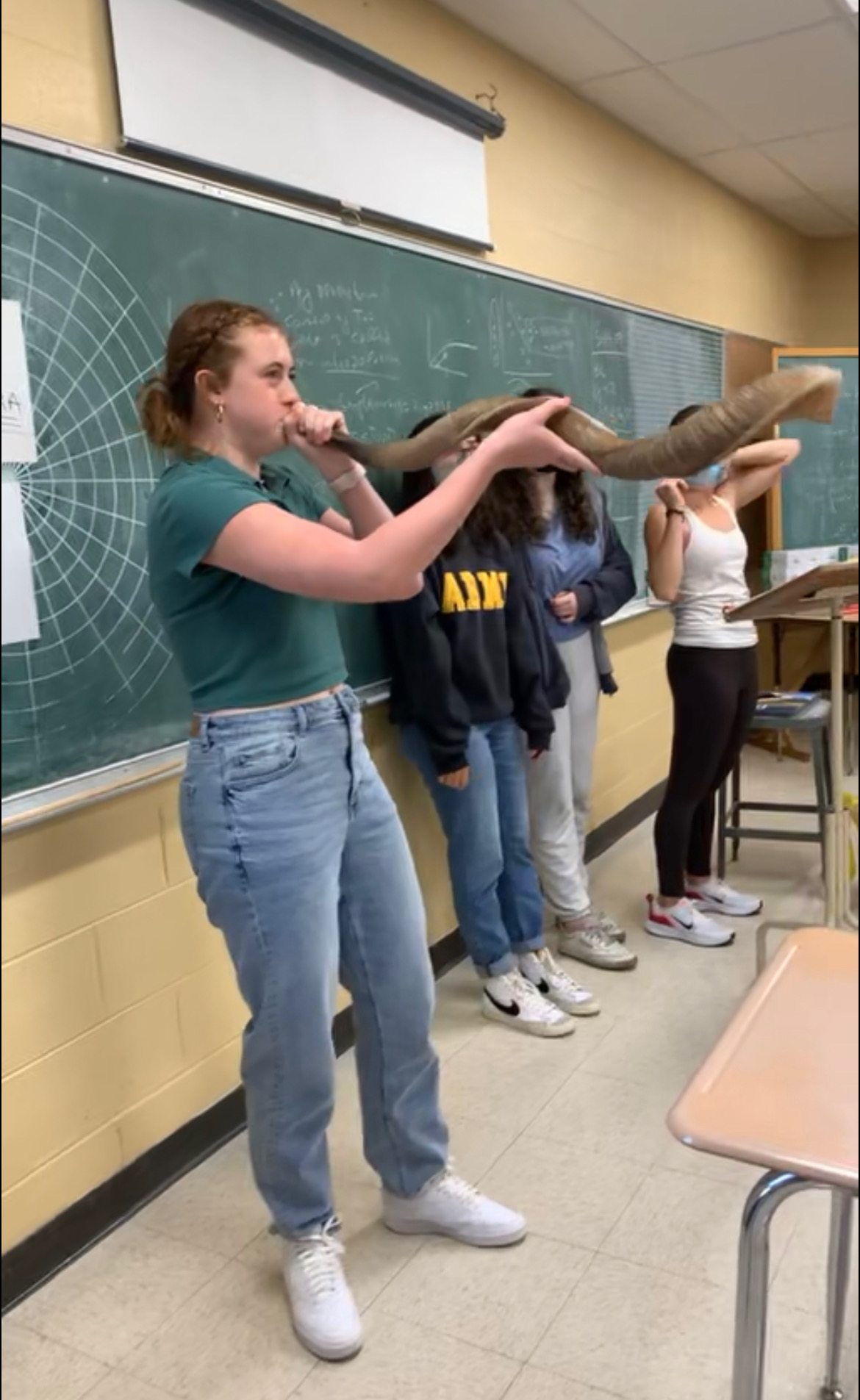 So far, the Club’s activities are taking place during the school day, which all agree is helping with attendance. There have been meetings to share about Rosh Hashanah and Yom Kippur, Sukkot, Havdalah and Shabbat, and of course, a Hanukkah party. Gabby says she believes the club is slowly making a difference. “It’s a ripple effect that’s spreading out among the school,” she says. And Maya says it has been gratifying for her to share the reality of Jewish life in a joyous way. “This is a concrete way to bring Judaism into other people’s lives. It’s a fun way to merge education with socialization.” And Kayla says she’s proud to share her Jewish heritage with others. Morgan says a highlight, of course, is the food. “People are having fun trying new foods. Someone even asked for a kugel recipe.”

The Club’s faculty advisor, Jerry Stelmaszak, who teaches math and statistics, works with the leaders in the planning phase, but remains largely in the background during meetings. When Gabby Sandberg first approached him for assistance, he was happy to help. “This is something that had not been done in the past at Brentwood High School. It’s important to bring a level of Jewish awareness to a school that is rich in cultural diversity,” he says. He notes he is not aware of any antisemitic instances at the school, but says the Administration has a zero-tolerance policy for such behavior. 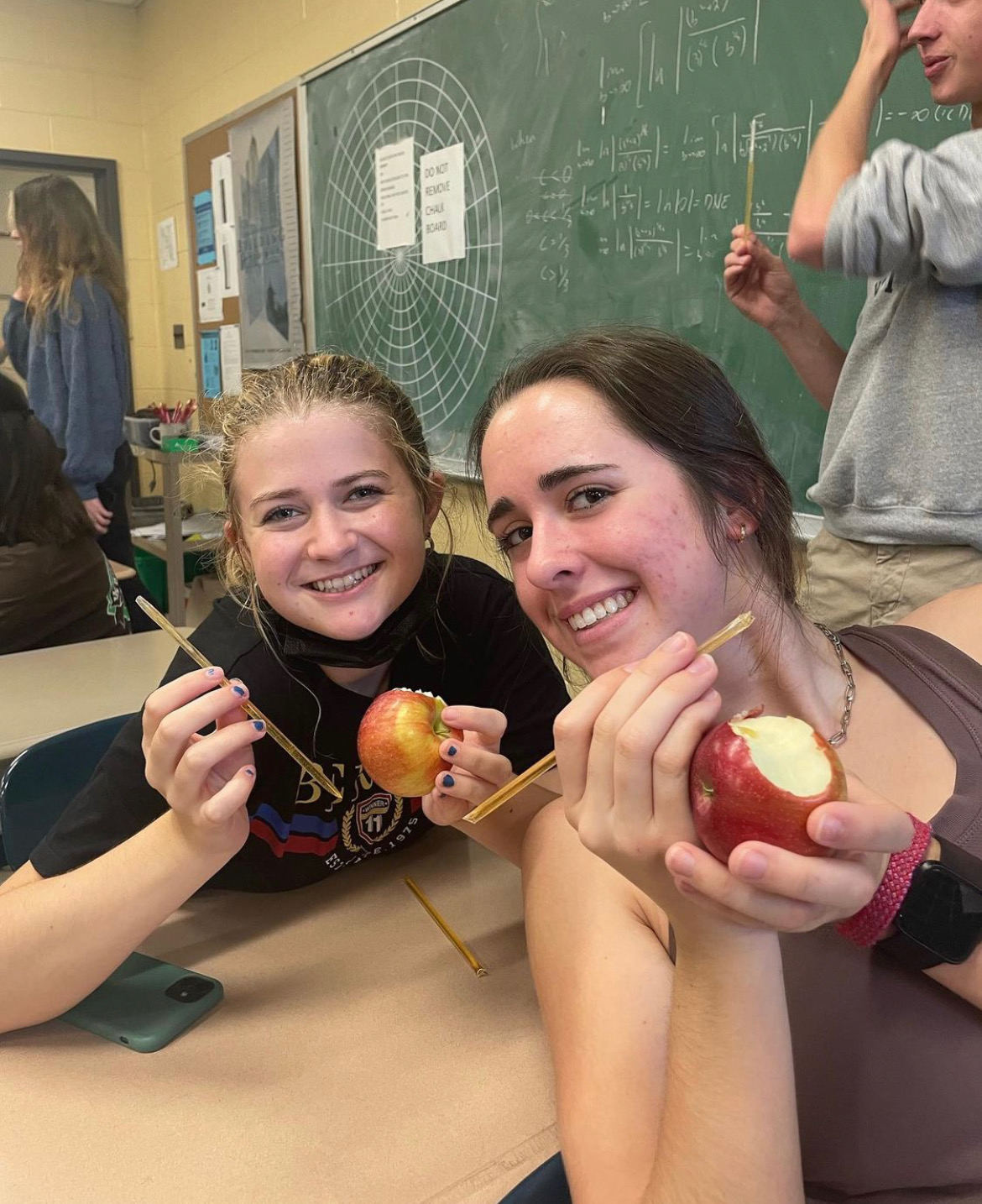 Coming up in the Spring, the Club is planning events around Purim and Passover, as well as bringing in a discussion about the Holocaust. Jerry Stelmaszak is the son of a Holocaust survivor and believes this type of education is crucial to developing greater understanding among the students. “My mother escaped Nazi Germany. Her family feared for their lives and moved to Michigan. If we don’t remember the past and what has happened to the Jewish people, it will be lost on future generations.” Morgan Kornblit says she is looking forward to listening to Jerry’s story. “It will be interesting to hear him open up about his personal life.” And Mya says while the meeting may be a tough one, “I’m excited to see where it takes us. For people to see how big, how tragic, the Holocaust really was.” 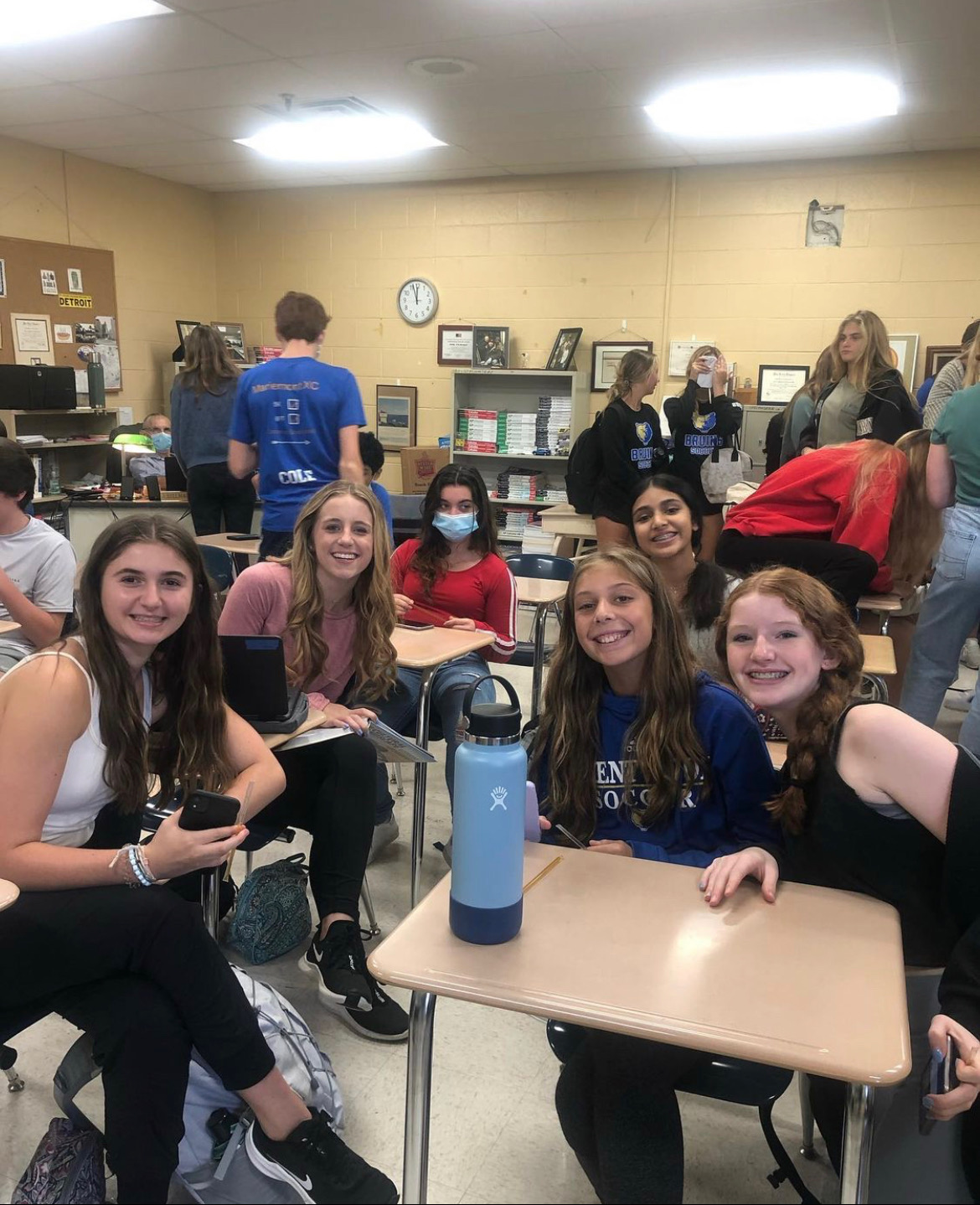 The Spring semester will also bring a “Judaism 101,” event to be led by Deborah Oleshansky, Director of the Jewish Community Relations Committee of The Jewish Federation. She says the Club’s leaders are modeling behavior that will go a long way toward moving the needle at the school. “This is a perfect example of kids using their own positive initiative to solve problems,” she says. In fact, The Federation provided some funding to help the club with its programming and is including the current and future club leaders in a “Student-to-Student,” training in the Spring. And Noam Harari, the Community Shlicha, will be leading an “Israel 101,” program. The training is a key component that will help ensure the club has a future at the school.

According to the Anti-Defamation League, last year was the third highest for incidents of antisemitism against American Jews since reporting began in 1979. And even as schools transitioned to remote learning, there were a reported 196 incidents of videoconferencing attacks, or “Zoombombing,” and 114 of those in institutions like schools, universities, and synagogues. Now that schools have resumed in-person learning, the ADL says the number could rise. And The Federation’s Deborah Oleshansky says The Federation continues to receive incident reports from parents and students. Some reports are merely for data gathering, and some ask for assistance. She says what the leaders of the Jewish Club are doing is a significant sign that students are learning to be proactive. “These kids took it upon themselves to do something positive. And it’s obviously working.” Advisor Jerry Stelmaszak says he is both proud and surprised by the popularity of the Club, and he is inspired by the new generation stepping forward. “We are a small minority in this country, and yet there is bigotry all around us. It’s inspiring that a young person is willing to discuss her faith with the student body.” Next year, Gabby Sandberg and her fellow leaders will be off at colleges around the country. Following in their footsteps are younger siblings and friends.

The reporting form is available on the Jewish Federation website, www.jewishnashville.org