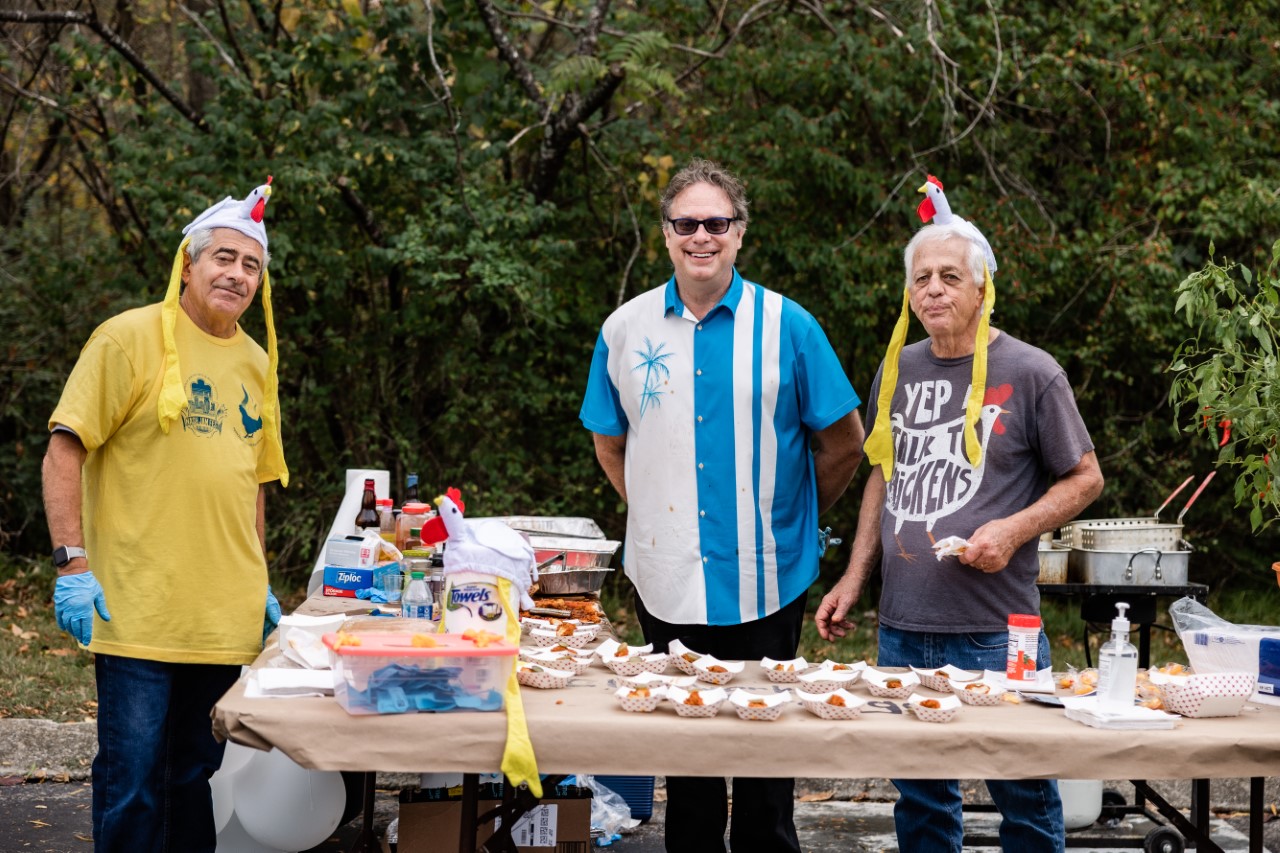 The seventh Annual Kosher Nashville Hot Chicken Festival was another community success! Held in collaboration with the Nashville Jewish Arts and Music Fest, the KNHCF at Nashville's Gordon JCC brought together members of every Jewish house of worship with their non-religious and non-Jewish friends to enjoy a great day of food and music. One 2015 opportunity for a West End Synagogue kiddush club to taste Nashville hot chicken has grown into a destination event for foodies, kosher foodies and the kids of Nashville. The KNHCF started with one professional, Bolton's Spicy Chicken and Fish, and one amateur team adapting their cooking skills to the laws of kashrut.

Friends and families, having enjoyed the first event, began forming teams. In 2016, a group of Temple folks came together around Dan Goldstein and Jeremy Brooks' idea of making a cooking contest fun, and Michael and Elizabeth Wolfe formed the Holy Flock to go head-to-head against Byran (zl) and Danielle Stein representing West End Synagogue. Robert Taeidkashani and NowGen formed a team and the competition got heated. Several years later, after changing chicken recipes and a pandemic, the recipe for fun remains the same: Bring together people, hot chicken, cold beer and good music and you cannot go wrong.

From the arrival of the chicken from Atlanta's Grillers Pride butchery to the clearing of the grounds, the KNHCF volunteers, participants and staff of the J made smiles and memories. Some slightly “fowl” weather found a few fleeing the flock, but the lines for tasting remained until the last tender. While some team names and professionals have changed – Hattie B’s and Hurt’s Hot Chicken – the KNHCF is something folks look forward to each year. After hearing about the event for years, national kosher food social media producers, Tripping Kosher, made the trip from Washington D.C. to Nashville to enjoy the day. This year’s judges included Nashville scene food, drink and travel writer Chris Chamberlain, local food writer and chef Nancy Vienneau and JCC camp director Andrew Fishman. After tasting every team's effort, the judges awarded best mild to West End's Cluckwork Orange and best hot and grand champions to the Chickun Alom, formerly Frey Enu. Akiva School, the people’s choice winner, also won honorable mention for its fried pickles.

Enlisting the professional services of Rhizome Productions and Matt Leff came with the added benefit of his leadership, along with Sherith Israel Cantor Dov Rosenblatt, and skill to co-produce the KNHCF alongside the JAM Fest. While the KNHCF has always focused on Nashville hot chicken and featured live music and children's activities, the JAM Fest leadership knows music and art. Combining separate focuses into one great community event was a net win for Nashville. With local, national and international music artists leading the charge, Memphis folks such as Zach Kaplan and his family jumped in the car for the opportunity to see the kind of musical talent not often found on one bill, much less in Tennessee. The participants, attendees and vendors remain excited about the success of 2022 and are already working to make 2023 another great pair of events.