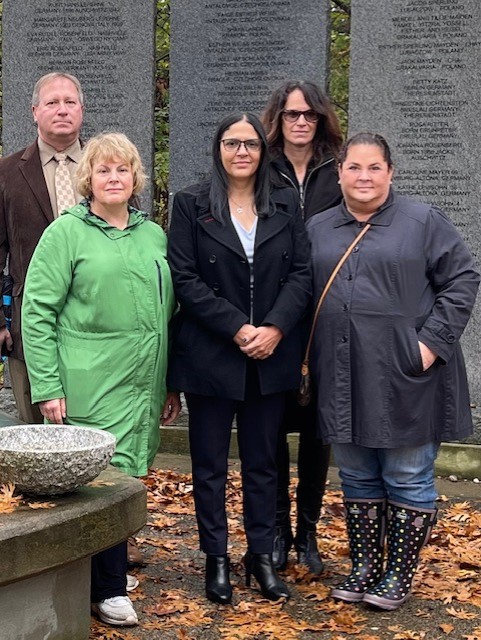 Late last month Anat Sultan-Dadon, Israeli Consul General for the Southeast Region of the United States, made her first in-person visit to Nashville. During the two days, she toured the Tennessee Holocaust Memorial and the art galleries at the Gordon Jewish Community Center. She also enjoyed dinner with Jewish Federation and Jewish Foundation of Nashville and Middle Tennessee leaders and participated in a community briefing at The Temple where she was interviewed by Rabbi Michael Danziger and answered questions from those in attendance. Finally, she sat down for an interview for Nashville’s Jewish Observer podcast where, in a free-ranging conversation, she touched on a variety of topics, including antisemitism, Israeli elections, and the role of women in Israeli leadership.

To begin, Sultan-Dadon discussed some common misconceptions about the differences between an Embassy and a Consulate. She explained that an embassy is situated in the capital city. For example, Israel has an embassy in Washington, DC, and the United States has an embassy in Jerusalem. And in addition, she says, “Because of the strong relationship between the United States and Israel, not just on a federal level, but also on a state level across the United States, Israel has eight consulates, each covering a region.” The southeast region is based in Atlanta and covers seven southeast states: Tennessee, the Carolinas, Kentucky, Alabama, Mississippi, and Georgia. “We are charged with promoting relationships on a state level,” says Sultan-Dadon, “The political, the economical, the cultural, the academic, the community relations.” She says the most important role of the consulate, is its relationship with the Jewish community.

Topping the issues of concern for the consulate is addressing antisemitism, not only in the southeast region but everywhere. Sultan-Dadon says, “Antisemitism is the top concern in almost every meeting that we hold with officials, with university administrations. It is an issue of grave concern because we know what these types of expressions of antisemitism lead to, and how dangerous they are.” She says the most important way of dealing with it is to speak out against it. “This is true of Jewish leaders, but it is also true of leaders from other communities, and I think that is vital. To see how we can engage with others, to educate others to stand up against antisemitism, just like we all should stand up against any expression of hate.” For students on college campuses, she says it is important for Jewish students to take pride in their identity, but also to not stand alone. “For organizations like Hillel, like Chabad, like other Jewish organizations, it’s critical that they stand with other student organizations, non-Jewish organizations that are fighting the causes with which we share values. Standing together for the variety of just causes is very important.” She adds that Jewish students need to educate other

Turning to the recent elections in Israel, Sultan-Dadon addressed what she says is, “Israel’s robust democracy.” There have been five elections in the last three years, and the most recent results appear to return the former Prime Minister to power. “Knesset member and former Prime Minister Benjamin Netanyahu have been given a mandate by the President to form a government. So now, coalition talks and negotiations are taking place.” She says the hope is for a return of stability. As to foreign policy and foreign relations, she says, “In the end, there is very little daylight between the political parties in Israel with regard to Israel’s core strategic interests. So very little will change in regard to Israel’s relationship with the United States. Israel has no greater ally than the United States, and this will remain true no matter who is in the Prime Minister’s office.” She adds that the relationship with the Jewish community outside of Israel will also remain a top priority.

The results of the recent Israeli elections have left some Israelis sad, frustrated, and worried about the right-wing nature of Netyanyahu’s coalition. Sultan-Dadon draws a comparison to the 2022 midterm elections in the United States. “Internally in Israel, it’s not so different from the U.S. Some people are disappointed with the results, and some people are delighted. I think this is part of democracy. And in the end, whoever wins is tasked with representing the whole country.” She also says it is important to distinguish political campaigns from actual governance.

Sultan-Dadon has been in the foreign service for nearly two decades. During that time, she has had assignments in Cameroon, Germany, The Netherlands, Australia, and now the United States. She is the mother of three daughters who has spent much of their lives experiencing and observing her role as one of a few women in Israel’s foreign service. She says she is proud of the career she has built so far, but for women in general, there is still work to be done. “I am always looking around me, behind me, in front of me, and seeing what I can do in order to promote more equality. We don’t have enough of that. And I think it’s something we all should strive for, women and men.” Sultan-Dadon says it is important to point out the inequities when they happen. “I don’t think we just need to give it time and it will happen. I think it needs to be intentional. If I even see a photo that gives representation only to men, then I point that out.” She believes all organizations should be committed to equal representation and opportunities for women. “We will have a better society when women are appropriately represented.” She pointed to former Prime Minister Golda Meir, who was a leader during a time when women did not enjoy equal rights around the world. “We did have that once, but we need to see it again, in Israel of course but everywhere.”

To hear more of the interview with Anat Sultan-Dadon, listen to the full podcast on Spotify. Search for Nashville’s Jewish Observer podcast.