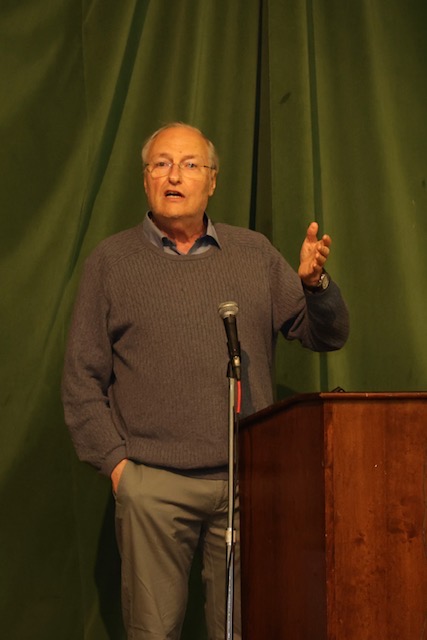 It is now more than seven decades since the Holocaust, the liberation of the concentration camps, and the fall of the Nazi regime. But it may surprise some to learn there are still Nazi war criminals alive and living in safety around the world. Dr. Ephraim Zuroff is making it his life’s work to bring those remaining war criminals to justice, even if it is only for the last years of their lives. Zuroff currently is the director of the Simon Wiesenthal Center in Jerusalem and coordinates the worldwide Nazi war crimes research. He toured Tennessee recently, sponsored by the Tennessee Holocaust Commission, and spoke at The Temple. “People are surprised we are still hunting Nazis,” he said, “There is a belated prosecution policy that allows us to bring people to justice as accessories to murder.” In 2002, Zuroff helped create Operation Last Chance, to offer financial rewards for information that helps bring Nazi war criminals to justice.

Zuroff highlighted three cases he worked on to help bring Nazis to justice to illustrate the difficulties he, and his team, face. Using informants and detailed database research, he is able to find former Nazis who lied on immigration papers and other official documents. “It’s kind of like with Al Capone,” he said, “We can’t always draw a direct connection, so we find other ways to bring them to justice.” Zuroff cites one example where he received an email from man he’d met at an event. This man said he had encountered someone who admitted to deporting Jews to the concentration camps. “He actually admitted he did it,” says Zuroff, who also says that none of the people he helps prosecute express any guilt or remorse.

Zuroff has chased Nazis all over the world and in the United States. Time is not on his side. “We need to find these people before they die. Sometimes they die while awaiting prosecution.” Still, he persists even though he knows he cannot bring back a single Jew who was murdered. “I feel very privileged I could devote my life to this endeavor. It is hard, but we can get justice for the victims.”

In addressing the rising tide of antisemitism, Zuroff says he believes social media is largely responsible. “The social media networks do not do enough, in my opinion, to stop antisemitic rhetoric,” he says, “The Wiesental Center in Los Angeles is working to the networks to be more responsible in what they allow.”

For more information about The Tennessee Holocaust Commission, visit www.tnholcom.org