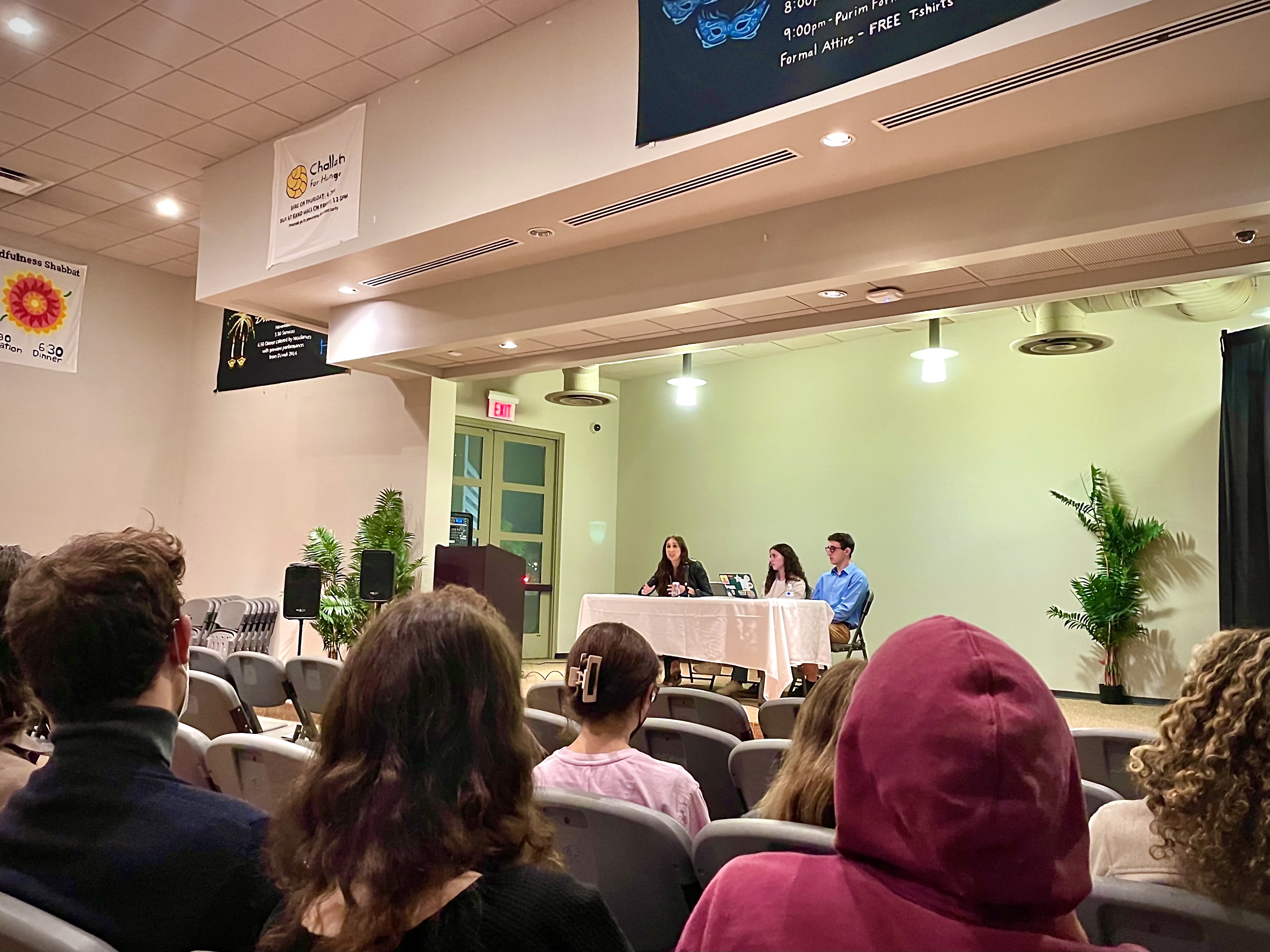 Dores for Israel, Vanderbilt’s on-campus Israel advocacy group, invited Amanda Berman to Hillel recently to speak about her experiences being at the intersection of “progressivism and Zionism.” Berman is the founder and executive director of Zioness, a national organization pushing for Zionist representation in activism and social justice movements.

“Our grassroots organization includes more than 30 chapters across the country that fight for the advancement of social, racial, economic and gender equality in America and for the inclusion of Zionists in social justice spaces,” the Zioness website reads.

Berman began her talk by validating the experiences of Jewish students, saying that one of her goals is to provide students with tools to help them address antisemitic situations if they arise. Her visit comes less than a week after Vanderbilt defensive backs coach Dan Jackson wrote a Facebook comment supporting Ye, who has been criticized in recent weeks for sharing antisemitic rhetoric in interviews and over social media.

“There are a lot of Jewish students that don’t have any of this [guidance], like they have a feeling and are looking for someone to put it into words and give them the language,” Berman said. “In that sense, I feel very proud to be able to do that to the extent that I am able to do that for people.”

Per Berman, much of the opposition to including Zionism in social justice spaces comes from misconceptions about Zionism itself.

Calling Zionism the “most successful decolonial movement in history,” Berman said that being Zionist has nothing to do with Palestinians or any other group of people; rather, it is about the liberation of Jews and the history of the Jewish people. Berman compared Zionists’ emphasis on Jewish rights to the Black Lives Matter (BLM) Movement, noting that one group advocating for their rights does not imply that other groups do not deserve those same rights.

“When we say, ‘Black Lives Matter,’ it means a specific thing, and it’s not about anyone other than the descendants of enslaved people in America. If you try to make it about someone else, you are trying to deny the lived experience, the history, and the present opportunities for people in this particular group,” Berman said. “The same is true for Zionism—we all get to define our movements of liberation, our forms of oppression, what persecution has meant and done to our people.”

She also criticized labels and binaries for their role in perpetuating the stigma surrounding Zionism, explaining that there is a clear distinction between Zionism and being “pro-Israel.” She added that she herself does not support the Israeli government.

A member of the audience submitted a question asking how to reconcile the seemingly conflicting goals of Zionists and Palestinians, given that both are fighting for their rights to self-determination in their ancestral homelands. Berman responded by critiquing the view of Israelis and Palestinians as a binary and expressing her belief in the potential for both groups’ peaceful coexistence.

“For me, it’s absolutely not a binary. Spain is sovereign, and so is France. Italy is sovereign and so is Germany. There’s no reason why Israel can’t be sovereign and so can Palestine,” Berman said. “There is enough land, they’re all living there right now—they can just make a border, have two sovereign states, agree to respect each other’s sovereignty and stop fighting.”

Role of Zionism in social justice

In recent years, Zionism has primarily been cast in a negative light in social justice spaces, per Berman. She referenced the 2016 platform of the Movement for Black Lives, which labeled Israel an “apartheid state” that sanctions discrimination against Palestinians and called for the divestment of U.S. aid to Israel.

“This was really an upsetting moment for a lot of American Jews who really care deeply about and had been engaged in racial justice activism for decades. All of a sudden, this huge movement [M4BL] that was doing such critically important work in the wake of various police killings of young Black men in America was now talking about U.S. foreign aid to Israel and calling Israel an apartheid state. Many Jews were looking around, asking ‘Why? Of all the places in the world, why right now is M4BL focusing on Israel?’” Berman said.

Berman acknowledged that there is a lot of legitimate criticism of Israel but said that activists and organizations should not take a position on Israel. She pointed to her own organization— Zioness—as an example of an organization that remains focused on its mission and does not take stances on Tibet or Ukraine, for example, despite her own positions on the topics.

Other examples of social justice or advocacy movements that have taken stances on or associated themselves with the Israeli-Palestinian conflict are the Standing Rock Sioux protests of the Dakota Access Pipeline, the 2017 Women’s March and SlutWalk Chicago. Berman also referenced an incident at the 2017 Chicago Dyke March, in which three Jewish participants were ejected from the demonstration for carrying pride flags containing the Star of David.

Berman referred to the Chicago Dyke March and the 2019 D.C. Dyke March as Zioness’ “biggest success” because the banning of the Jewish pride flag at these events was covered by numerous media outlets, garnering worldwide attention.

Reflections on the event

Senior Tucker Apgar praised the event for providing him with a “novel” way of thinking about Zionism.

“Obviously as someone who is Jewish, I do identify as a Zionist, though I do have my hesitations about full-fledged support of Israel at the moment,” Apgar said. “But I think that the speaker gave us a good way to think about how we can express our identity as Zionists while also keeping in mind what it means to be in progressive spaces like college campuses.”

Sophomore and DFI executive board member Zander Schwartz said that this speaker is one of a string of recent diverse perspectives the organization has brought to campus, including the former U.S.-Israel ambassador and a Palestinian-born, pro-Israel speaker last year. He called the speaker “inspirational” for her in-depth knowledge of and ability to confidently discuss the topic and hopes more students will make the effort to attend events like this one in the future.

“We were tabling and had a lot of friendly responses, but then occasionally we’d be like ‘free food and GME credit!’ People would look at the table, recognize our organization and then just walk away,” Schwartz said. “It was really tough because I’m not a bad person, other people here aren’t bad people. It is something that I think is just so misunderstood, and if people took the time to actually understand it, they would see there’s more to it.”

Junior and DFI president Nathan Appelbaum added that the organization tries to select speakers based on what would be most relevant to students on campus. He acknowledged that one speaker event is not enough for people to fully form opinions on the subject and hopes to host more events to foster discussion.

“There’s a lot of great speakers out there, but we’re tailoring it to ‘what do we want not only for our DFI members, but also what does the community need right now?’ A lot of people actually came into this space not knowing very much about it, and I’m excited to continue some conversations afterwards with those people especially,” Appelbaum said.