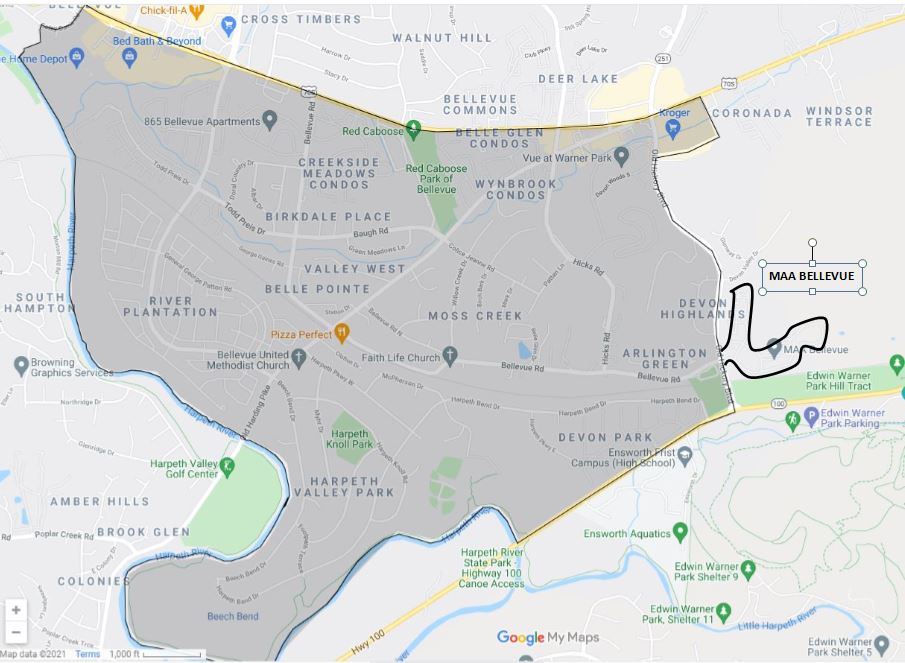 The Eruv for the Bellevue area in West Nashville includes a large section of the Jewish community, and is in close proximity to the JCC, Akiva School and much of Jewish life in the area and includes affordable housing for families of all income levels. For more information contact Chabad of Nashville at 615-646-5750

The Shabbat of August 21 marked the first time that Brianna Harper was able to push her one year-old son Yishai to synagogue in a stroller. It was the first time, while walking to Shabbat services, that Debra Turriciano was able to carry her Shabbat prayer book to services at Chabad of Nashville. It was also the first Shabbat that families in the MAA Bellevue subdivision (formerly known as Colonial Grand, or The Grove) can visit the community playground while bringing along their favorite toys and balls. That’s because the Eruv in the Bellevue area of Nashville, known as, “the Nashville Eruv West,” has been expanded to include the 569 apartments of the MAA Apartments in Bellevue, which means Jews within its perimeter can carry items on Shabbat. The Eruv was put up by Chabad of Nashville with the assistance of visiting rabbis from Florida who are experts in the laws of Eruv.

The original Bellevue Eruv in was built in February 2015, when several consultants came to visit the community, and scout the area on the most advisable location for the Eruv boundaries in Bellevue. There were many hoops to jump through with the local authorities, including obtaining permission from NES to use their electrical poles, from the Department of Public Works to obtain permission for the use of the Right of Way, and from the mayor’s office in order to create the Eruv District in Bellevue. The project was officially designated by then Mayor of Nashville, Karl Dean, who authorized the creation of the Eruv District in the Bellevue area.

The Eruv covers an approximately eight square mile area. It runs from Highway 100 near the Ensworth School on the South to Highway 70W on the North, and from Old Hickory Blvd. on the East to Coley David on the West. The new addition to the Eruv District was added, as new families are moving to Nashville, and are seeking affordable rental units, inside the Eruv, within walking distance to Chabad of Nashville. “An eruv is a statement that this community is on the map, that it’s actively together, that it’s growing and building an infrastructure for traditional Jewish life. We expect the eruv to help unite the community and allow a more vibrant energy at synagogue. I’m looking forward to more families showing up on Shabbat for the TGIS Shabbat celebrations, the Shabbat mornings kids club, and be part of a dynamic Jewish community,” said Rabbi Yitzchok Tiechtel.

An eruv not only enhances the quality of life in the Jewish community, but also makes the community much more attractive to those considering relocating to a new community. As Nashville is booming and growing, the Eruv will make a difference for many young couples and newcomers, to their decision of where to live and raise a family.

The Torah identifies 39 categories of work that are prohibited on Shabbat. One of those is carrying anything from a private to a public space. An eruv expands the private domain and allows Jews to carry within those boundaries. The eruv is a symbolic enclosure that surrounds the Jewish community. Under Jewish law, carrying on the Sabbath is allowed within the eruv because the entire area within the eruv is considered as if a single property. An eruv may consist of natural boundaries such as a river bank or of walls, fences, buildings, or hedges. It can also consist of designated utility poles and wires (electric, telephone and/or cable) or strings, if the perimeter of the community eruv is uninterrupted.

The Shabbat will be experienced for many in Bellevue in a whole new way, it will be a day where families and children will say "Thank G-d It's Shabbat.