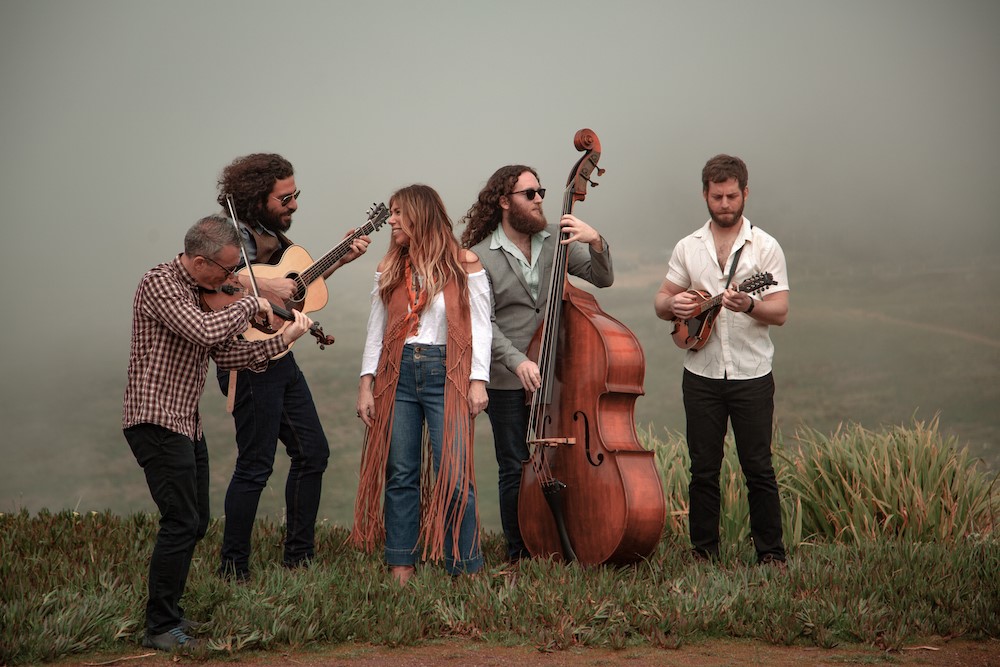 When thinking about “Jewish” music, what comes to mind is often klezmer-based tunes played in a minor key with lyrics in either Yiddish or Hebrew, and a background beat reminiscent of the Hora. In recent years, there have been some break through Israeli and American artists who use more modern instrumentals and lyrics, with a sound that leans closer to rock and roll. And of course, there are the American Jewish folk singers whose music provided a soundtrack for summer camp singalongs and often, synagogue prayers. Well, put all of that together, and what comes out is the Americana/Bluegrass/Jewish blend of Nefesh Mountain. The husband-and-wife duo of Eric Lindberg and Doni Zasloff has been exploring their Jewish and American heritage through music for the past seven years, touring, performing, and recording. Both are native New Yorkers and their shared passion for music and each other is what drives them. “The band is a love story,” says Lindberg, “We’re trying to live, breathe and sleep this life together and blend our love of being Jewish with our love of American music.”

Their latest album, Song for the Sparrows, is their third. It was inspired by a 2018 trip to Eastern Europe. Zasloff describes a particularly moving experience about standing in a field in Europe and thinking about her ancestors who were led out to the forest and murdered, all the while sparrows filled the sky. Upon her return, the tragic Tree of Life synagogue shooting occurred.  “What happened there could have happened to any of us. There is still so much antisemitism in the world,” she says. She was moved by the image of the sparrows. “They are small and often overlooked, but they’re beautiful and they are everywhere,” she says. The music is far from somber, though. While the lyrics are bold, the album is uplifting and filled with hope.

In discussing their musical journey, both Lindberg and Zasloff talk about encounters with antisemitism. “It’s a very strange thing to be Jewish in America today,” says Lindberg, whose father converted to Judaism years ago. “Everyone in my family has wrestled with our identity.”  Zasloff notes instances of being the butt of jokes and sarcasm. She cites a particular incident at an international music conference as a turning point. “We were speaking on a panel, and someone stood up and said, ‘Why do you have to do this music?’ I was so shocked I couldn’t believe it.” Both agree their music is a clear expression of their unique identities as American Jews. “This music comes from our soul,” says Zasloff, “It’s not a mashup. It comes from all the different things we are.” She notes that early string bands consisted of Black musicians, and more recently bluegrass itself is largely associated with Christian spirituality. “We’re adding to the world of Americana. We’re not trying to preach religion, but to share our culture through this genre.”

Nefesh Mountain has recorded all their albums in Nashville. Lindberg says, “To play down here has always been a thrill.” He says his dad is from rural Georgia, so the South has a special place in his heart. “I spent summers hiking the Appalachian Trail. I just love it here.” Zasloff says she is grateful for the opportunity to work with many of her bluegrass heroes. “Everyone here has been so supportive and embracing of our music. These musicians shaped bluegrass in a way that helps us make Jewish music accessible.”

The duo is happy to be performing live again after spending so much time doing virtual gigs. Last year they performed a live streamed Hanukah concert and ended up releasing 12 tracks from the show, including three from Woody Guthrie. Coming up on December 15th, they will be performing their Hanukah show at City Winery in Nashville. “We’re so excited to be performing in person again and our Hanukah album echoes all of our music and is not your typical Hanukah music,” says Zasloff. The couple’s tour entourage includes their family’s newest addition, four-month-old Baby Willow. “She travels with us everywhere. She was a dream and a prayer, and it was such a blessing to have her when we were able to be home with her.” Further proof that for Nefesh Mountain, family and music are intertwined against a backdrop of love.

For information about the City Winery concert, or any of Nefesh Mountain’s music, visit www.nefeshmountain.com.