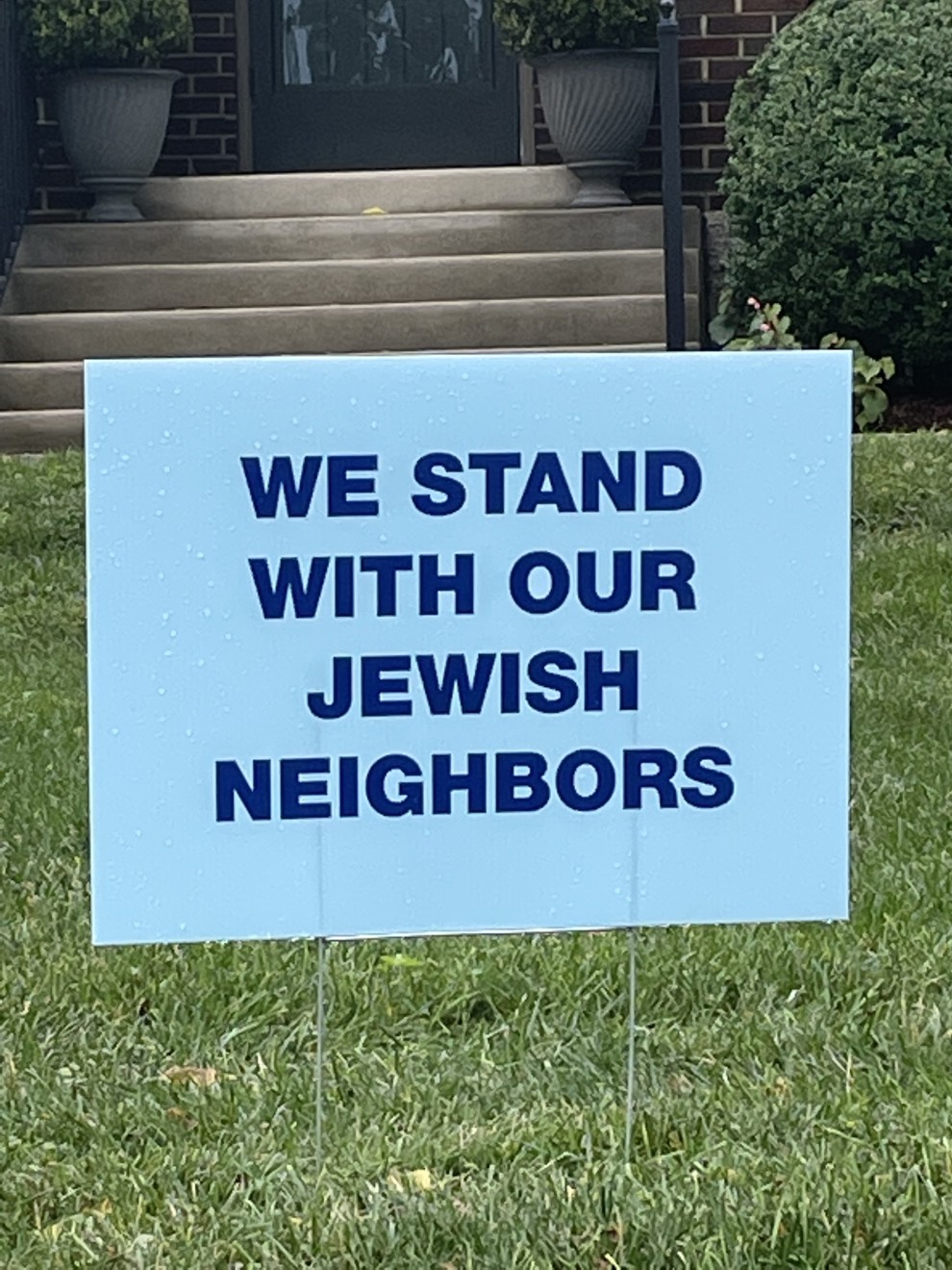 “Hateful, divisive rhetoric and antisemitism have no place in Nashville, TN. “Antisemitic attacks are on the rise and continue to expand throughout the country. Painfully, Nashville is not immune. Nashville residents both Jewish and non-Jewish have been confronted by antisemitic messages not only on social media, but also at their homes and in their communities… “This disturbing antisemitic propaganda is similar in tone and style to that used for generations to target the Jewish people and paint them as the enemy. Once Jews are defined and identified as the enemy, anything done against Jews can be justified. “As a community, we will not tolerate these actions. We stand united in support of the Jewish community, and against the extremism and hatred of a small but dangerous faction of our city.”

The mostly non-Jewish neighbors, who found the flyers littering their lawns and driveways filed police reports and took to social media to express their outrage and support for the Jewish community. Vicki Dooley was one such neighbor. She says she was out for a bike ride and upon her return she spotted a group of neighbors clustered around talking. “It was so disturbing; we couldn’t just throw those things in the trash. I said it should be reported immediately, so we called the JCC and then the police,” she says. She says the group was contacted by Adam Bronstone, Director of Planning and Israel Partnerships with The Jewish Federation and Jewish Foundation of Nashville and Middle Tennessee, who responded quickly with information and support. “Adam explained the intense network of law enforcement that deals with this type of thing. He also educated us about antisemitism,” she says. Dooley, who is a retired Metro Nashville Public Schools teacher, says while this latest incident seems small, things like this cannot be ignored. “None of us [who received the flyers] are Jewish, but we were disgusted, saddened, and upset. It makes you think about antisemitism through the years.”

To date, no specific group has been identified as responsible for the flyers, but similar incidents were reported in other parts of the country, mainly in neighborhoods near synagogues, Jewish Community Centers, and other Jewish buildings. Rabbi Saul Strosberg of Congregation Sherith Israel says several of his congregants received the flyers, as well as non-Jewish neighbors. He says it was upsetting for everyone, but that it is important to be clear to address the act itself rather than the content of the flyers. “It shows where we are on the continuum of hatred going on right now, and we have to take it very seriously,” he says, “Jew hatred can be explicit as well as implicit.” Eric Mendelsohn lives in the area and on his daily walk, he spotted the flyers on neighborhood properties. “I saw the bags and when I picked one up, I was pretty shocked to see the antisemitic language and emblems. I walked around and picked up as many as I could. I probably got about 20,” he says, “I was amazed something like this would turn up in this day and age.” Rabbi Joshua Kullock of West End Synagogue says he also heard from congregants who were very upset. But he stresses it is important to remember that despite the rise in antisemitism, the Jewish community has many allies and friends. In a recent editorial in The Tennessean, he wrote, “It was heartwarming to see the swift response made by our local political leaders and to read emails and letters sent by different religious and communal leaders across the spectrum. And yet, today we are experiencing not only a spike in antisemitic events all around us but also the normalization of some of that gruesome rhetoric that creates the conditions for antisemitism to thrive.”

Members of other religious groups also expressed outrage over the incident. Sabina Mohyuddin, Executive Director of the American Muslim Advisory Council (AMAC), says this type of act brings the presence of local hate groups into focus. “We know it’s out there even though Nashville is a great place to live. These elements lurk everywhere,” she says. She is grateful for the partnerships between faith groups in the city, and says the hard work is paying off. “We have made clear groups like this are a very small minority and there is no place for them here.” She says in her faith community there are also fears about hate crimes. “We always must be in crisis response mode, particularly in our places of worship. We also must rethink how to warn our community without frightening anyone.” Mohyuddin also says she believes people are becoming bolder in what they’re willing to do to express their hatred, citing the prevalence of guns as a contributing factor, as well.

The recent incident has not been attributed to any specific group, but law enforcement is ready with action plans to support the Jewish community. Bronstone says thanks to long term positive relationships, both with law enforcement and the local community, it is possible to deal with any real threats and situations effectively. “We have built very strong, overlapping relationships with local, state, and federal authorities who are constantly there for us,” he says. David Corman, Commander of the West Precinct of the Metro Nashville Police Department, says an investigation into this incident is ongoing, and extra patrols have been assigned to the neighborhoods to ensure residents feel safe. He says it is all part of their overall strategic plan. “We need the partnership and assistance of the community in our effort to maximize our coverage and effectiveness.” He encourages people to report suspicious behavior or incidents.

This latest antisemitic incident coincides with Governor Lee’s recent budget amendment that includes additional funding for security in houses of worship. (See accompanying Antisemitism Audit) The funding allows synagogues and other Jewish buildings to add designated security personnel. The Federation’s Bronstone says he is pleased with the show of support at the state level and is working to advise and assist the congregations and agencies to make best use of the funds. “This could not have come at a better time,” he says, “The Jewish Federation is always ready to support and help the community with whatever it needs.” And as AMAC’s Mohyuddin points out, it really does require a collective approach to keep everyone safe and secure. “Hate crimes happen, but we are working together to create an inclusive society and those extremists are not welcome.”

To report suspicious activity, MNPD’s Commander Corman says for emergencies call 911, for non-emergencies call 615-862-8600, to make a report by email: westinvestigations@nashville.gov. And to learn more about how The Jewish Federation coordinates security in the community, contact Deborah Oleshansky at deborah@jewishnashville.org