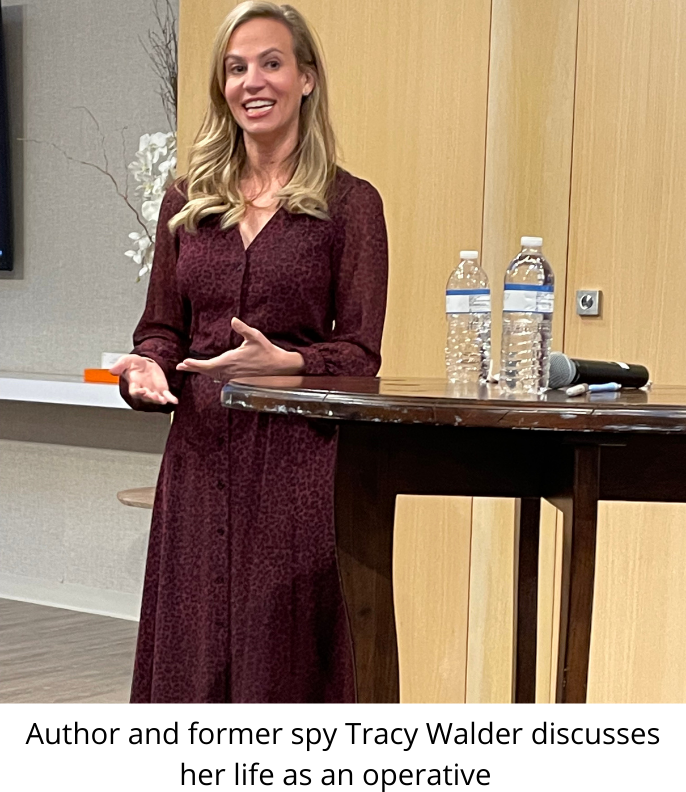 Author Tracy Walder peeled back the curtain on the CIA and FBI at this year’s first Women’s Jewish Philanthropy Event, sponsored by The Jewish Federation and Jewish Foundation of Nashville and Middle Tennessee. A former operative in counter intelligence, Walder discussed her experiences as a young, Jewish woman during the tumultuous pre- and post-9/11 period, all detailed in her book An Unexpected Spy: From the CIA to the FBI, My Secret Life Taking Down Some of The World’s Most Notorious Terrorists. She spoke about the people and events that influenced her decision to join first the CIA and later the FBI. “It was my high school history teacher who inspired and encouraged me to pursue history at University of Southern California,” she says. Her initial plan was to become a teacher, but her advisor in college, who also happened to be the Dean, opened her eyes to the wide variety of applications for the subject. And later, a televised interview with Osama bin Laden, conducted by CNN’s Peter Arnett, led her to consider the world of international intelligence gathering. “During the interview, I heard bin Laden declare war, not only on the United States, but also on the Jews. I felt I had to take this further,” says Walder.

The group of close to 100 women who attended both in-person and virtually, was riveted as Walder shared details of the job that took her to 11 countries across Africa, the Middle East and Europe in search of Abu Musad al Zaqarwi, one of the most dangerous men in the early days of bin Laden’s reign of terror. She spent time living in Afghanistan where she says she met with and interviewed terrorists. “I was curious why they hated Americans so much,” says Walder, “I learned it was because they hate America’s support of Jews and Israel.”

After spending so much time living and traveling overseas, Walder eventually made the difficult decision to leave the agency in favor of a more stable life closer to family. She joined the FBI and was eventually assigned a position in her home town in Orange County, California. That experience was a very different one from what she’d known with the CIA. Her time with the FBI was marked by bullying, harassment, and the constant message that she did not belong there. “For some reason, I didn’t fit the narrative of what they thought I should be,” says the tall, slim, blonde Walder. “I realize I was sexually harassed the whole time I was there, but I became numb to it.” And in fact, she said she had not planned to write about the experience in her new book, but in 2019, 16 women came forward to file a discrimination lawsuit against the FBI. Walder decided it was important to add her voice to the narrative. “I had a lot of embarrassment that I let this happen to me. But the lawsuit made me see I was not alone, and this all must come out,” she says.

Walder left the FBI after just one year. She found her way to what she had originally planned to do: teach history. After earning her master’s degree, marrying, and moving to Texas, she began teaching at a girls’ high school. Her students had so much curiosity about her former life, and she realized she had an opportunity to educate the girls about being in law enforcement. “Only about 17% of FBI agents are women,” says Walder, “Women were only allowed to become operatives in 1972.” She created a class on national security and foreign policy, something she continues to teach, as well as being an adjunct professor in the field at a nearby college. She also is on the Board of Girl Security, a nonprofit organization that helps prepare girls for careers in the security field.