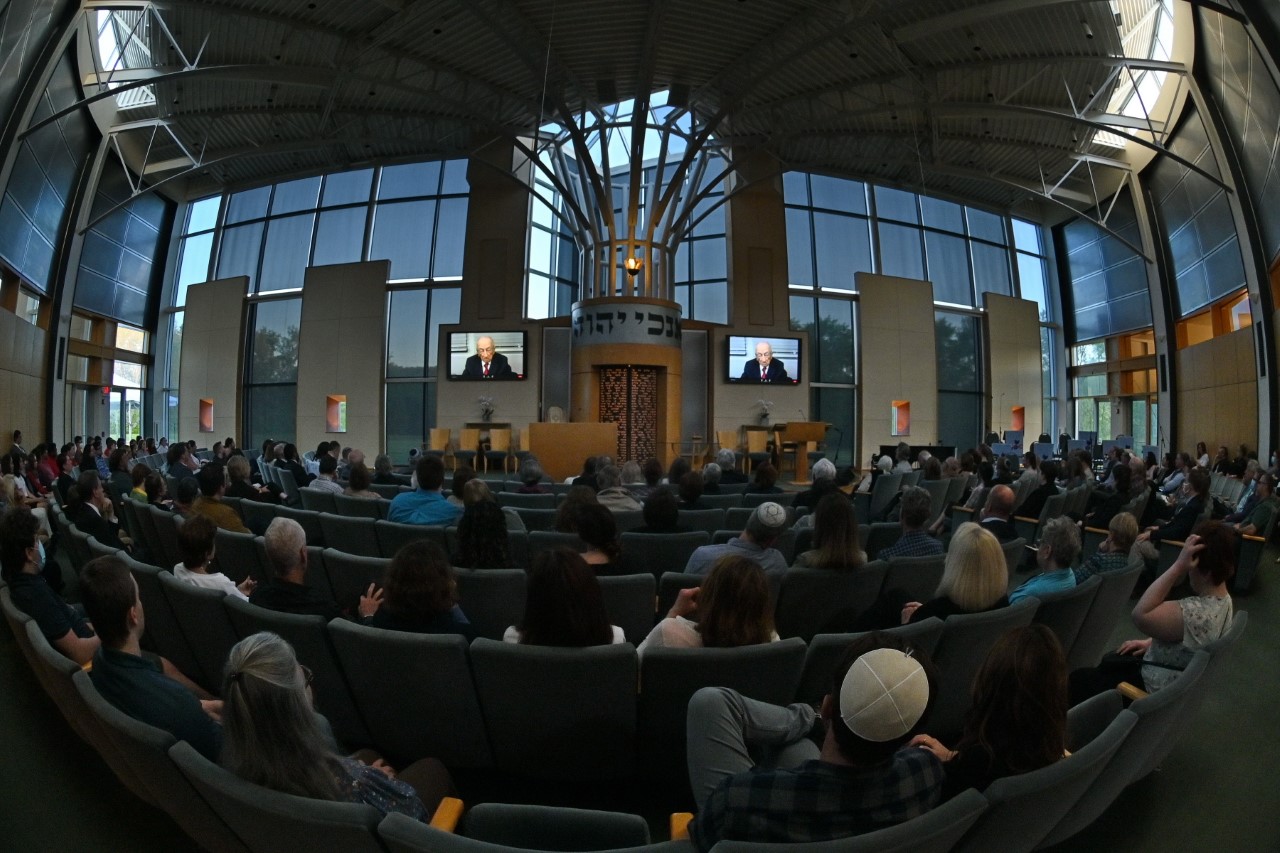 102-year-old Ben Ferencz is pictured on the screen at Congregation Micah.

Over 500 people gathered in person and on zoom to hear Benjamin Ferencz, the last living Nuremberg trial prosecutor, speak about his experiences during World War II and in the following months of prosecution of Nazi war criminals. This special event was produced and presented by Chabad of Nashville.

102-year-old Ferencz shared about his life growing up in New York City after he and his family immigrated to the United States from what is now Romania. Ferencz graduated from Harvard University’s Law School in 1943 before joining the U.S. Army in 1944 where he served in the most important battles of the European theater including D-Day and the Battle of the Bulge. In 1945 Ferencz took on what would be the beginning of his most important professional role, investigating war crimes as allied troops liberated numerous Nazi concentration camps that were scattered throughout Europe. Ferencz saw first-hand the atrocities of the Nazi’s systematic killing infrastructure that aimed to murder all of Europe’s Jewish population, along with other people considered by the Nazi government to be “undesirables,” in the Holocaust.

Ferencz described the traumatic scenes that he witnessed and detailed how he sought to preserve evidence inside and outside of the concentration camps, much of which were documents produced and kept by the Nazis that detailed their atrocities. “I probably didn’t realize it at the time, but the traumatic effect of what I had seen, the crematoriums still going, the bodies burning, the inmates, some of them trying to fight back and being killed," Ferencz said, "the horrors of the German plan and how it was being carried out successfully according to their side. That, of course, has remained with me."

Ferencz continued his investigations after the end of the war, collecting more documents that would later serve as the central evidence that led to the conviction of all 22 defendants for the murder of more than 1 million people in the phase of the trials that Ferencz prosecuted. Thirteen of those 22 defendants were sentenced and put to death, the conclusion to the first case that Ferencz ever prosecuted, which has since been known as the largest murder trial in world history. “People say, ‘Weren’t you nervous?’ No, because I didn’t kill anybody,” Ferencz said. “They were nervous, they’re the ones who did the killing and they knew that I knew it and that I could prove it. That’s where my story begins, not where it ends." Ferencz received thunderous applause by the audience when he said, "Regarding the evidence of the Holocaust happening, nobody in my presence will tell me it didn't happen."

Following Ferencz’s work in the Nuremberg trials, he has spent the remainder of his life advocating for international peace, and for what he has argued is a key component of peace, an International Criminal Court which was formally established in 2002. 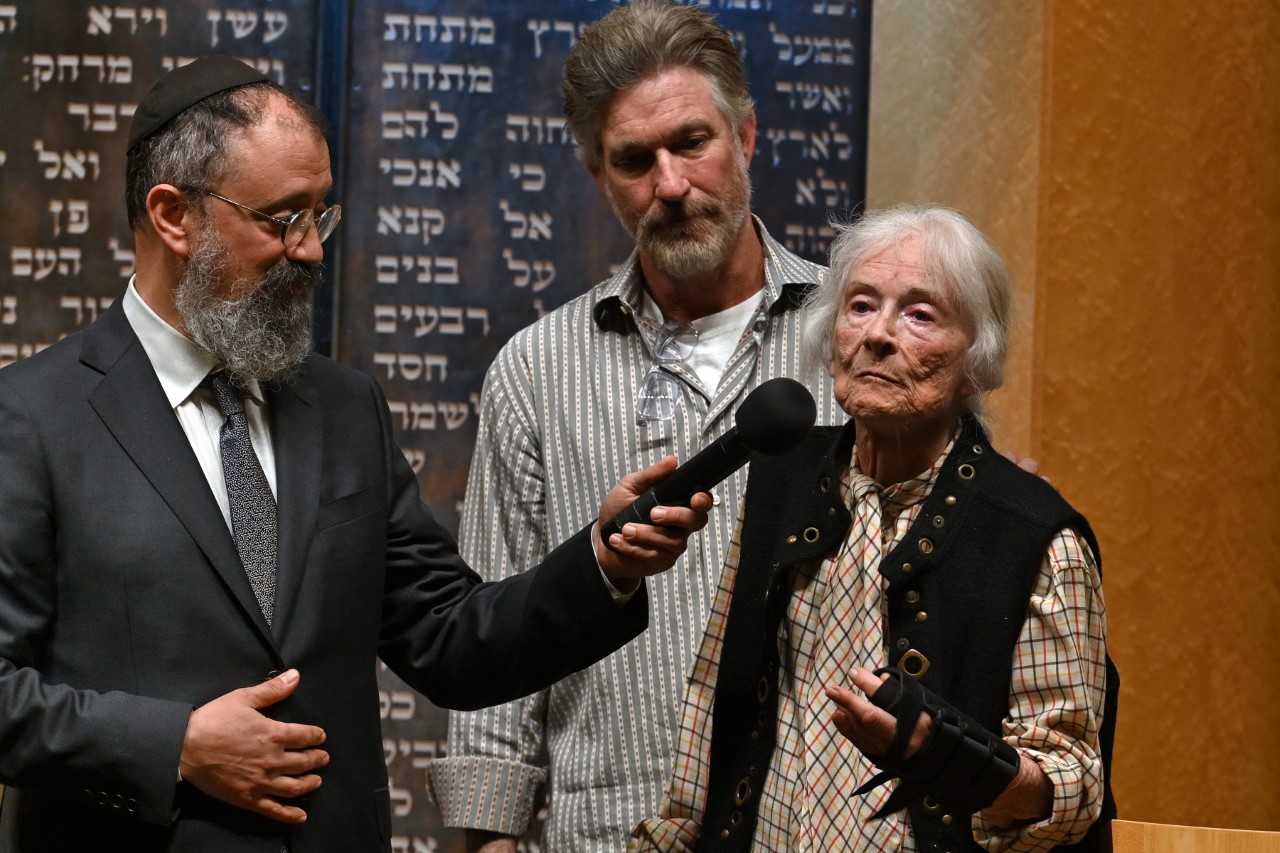 Following Benjamin Ferencz, Holocaust survivor and author Anda Rosen shared her story of survival, with a message to the younger generation about the power of the individual to choose life and see the blessings and silver lining bestowed upon us today, despite the challenges we face. “As the number of Holocaust survivors rapidly declines, it’s increasingly urgent for us to honor survivors’ stories, elevate their voices and heed their advice," said Rabbi Yitzchok Tiechtel, Executive Director of Chabad of Nashville. "It’s imperative to educate the younger generation, as there will come a day when there are no living survivors left to share first-hand accounts of these atrocities. The importance of this endeavor extends beyond communities of faith, as we all have a responsibility to educate ourselves to create a more peaceful world." 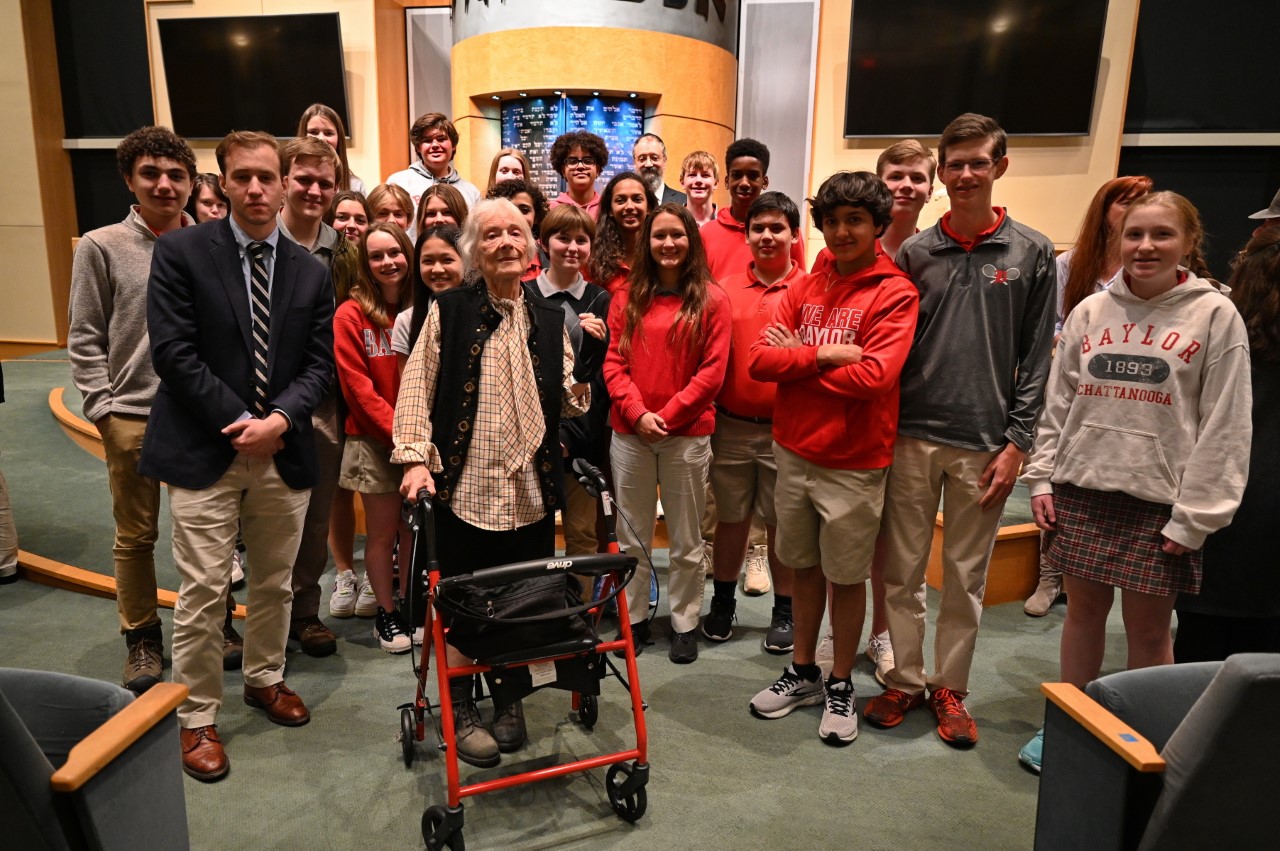 Students from Baylor High School in Chattanooga attend the event as part of their Holocaust studies.

Participants came from Chattanooga, Knoxville, and Memphis across Middle Tennessee. A class of students from Baylor High School who were studying about the Holocaust came on a class trip with their school chaplain, and their only Jewish teacher, to meet a Holocaust survivor in person. This special event is part of an annual Chabad of Nashville’s annual Holocaust Lecture series, which has previously featured Holocaust survivors and has sought to educate younger, non-Jewish residents about combating antisemitism and being a light in a dark world.